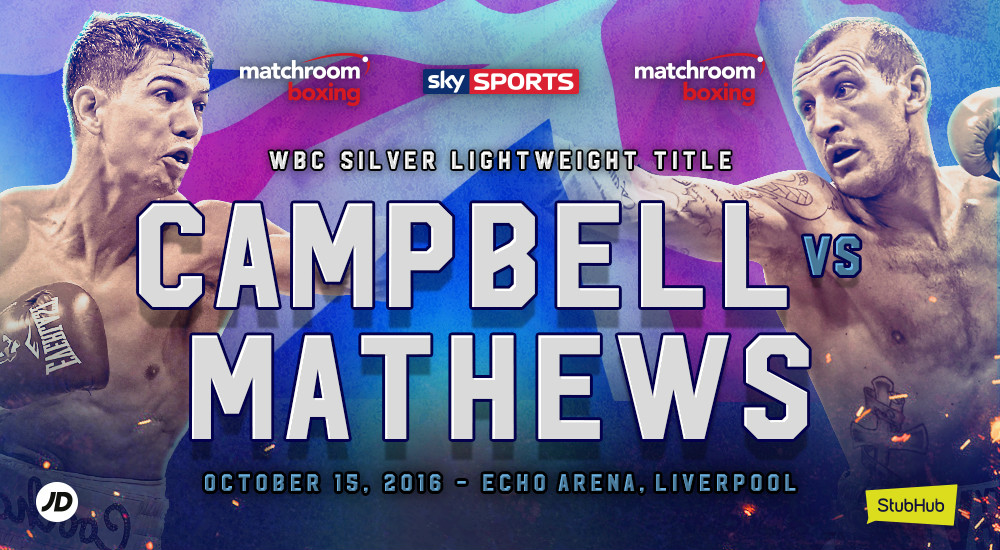 Luke Campbell and Derry Mathews to clash in Liverpool

Luke Campbell MBE will defend his WBC Silver Lightweight title against Derry Mathews at the Echo Arena in Liverpool on October 15, live on Sky Sports.

Campbell landed the belt against Argenis Mendez in his last outing in Leeds in July, and the Hull star will be looking to cement his position as a World title contender with a win over Mathews. The 2012 Olympic gold medal hero is looking for a third win on the bounce as he targets World honours in 2017, and the 28 year old is excited by the prospect of facing a hostile crowd in Merseyside.

“This is exactly the kind of fight I have been looking for and doing it in his back yard is even more exciting,” said Campbell. “I feel like I am starting to reach the peak of my professional career and Derry has some great wins on his record, I’m expecting it to be my toughest fight yet.

“This fight will engage the British public and that’s what I want, to entertain the fans and give them the big domestic title fights that can be made. My camp is underway in Miami and I can’t wait for a huge night on October 15 in Liverpool.”

‘Dirty’ Derry is looking to get back onto the World title trail having challenged Terry Flanagan for the WBO crown at the Merseyside venue in March, and the former British and Commonwealth champion will be looking to add another Hull victim to his impressive CV having KO’d Tommy Coyle on the undercard of Campbell’s pro debut in 2013.

“I don’t back out of fights, especially in my home city, it’s a great fight for me and one I can’t wait for,” said Mathews. “I’ll take anyone on, and it’s an opportunity to fight in my home city against a World-class fighter, I think this has come too early for him.

“When I win this fight it’s going to open doors for bigger and better things, the Lightweight scene is thriving at the moment and there’s plenty of life in this old dog, believe me.

“Luke has had it all his own way in the pros so far, he’s been beaten by a guy he was expected to beat and he’s never been in with a puncher like me and someone that’s going to take him into deep waters. He was a fantastic amateur but the pro game is different and I don’t think that he’s settled in as a pro as he wanted to.

“Luke will experience things he’s never faced before and I believe I can beat him otherwise I wouldn’t have taken the fight. People might look at my age and the number of fights I’ve had, but I still feel fresh and I live the right life, and I’m prepared to dig deep and do what I need to get the win.

“I don’t know what it is with Eddie and his fighters, for some reason he wants to get me beaten up but it never works! I always get the win. I’m always the underdog against the Matchroom fighters but I come out on top and that’s going to continue, I think Eddie’s put Luke in too deep here and I’ll beat another one of his guys. I want to thank my management team at MGM for making this fight with Eddie.”