Result: Anthony Crolla, Jorge Linares put it all on the line in Manchester 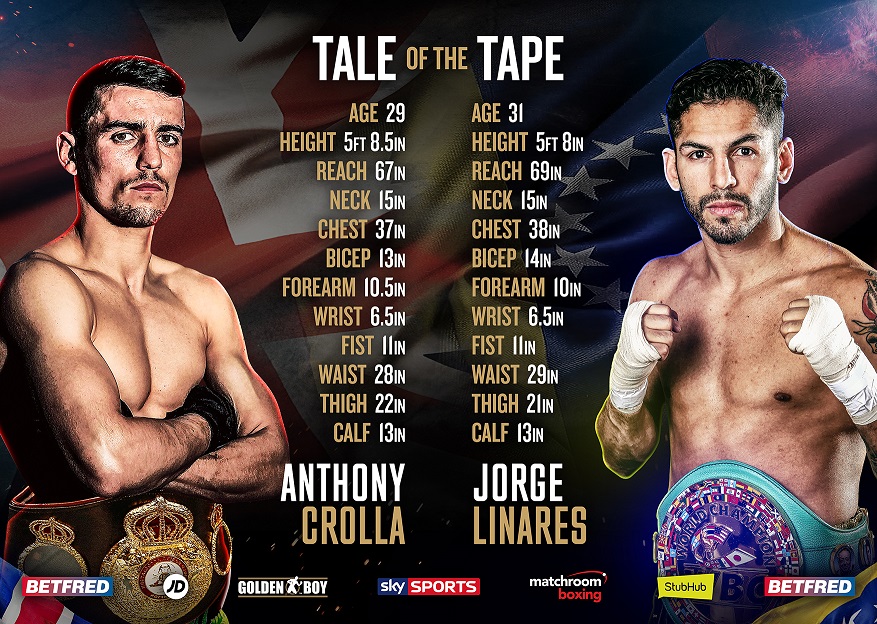 Despite his luxurious ring moniker, Manchester’s Anthony “Million Dollar” Crolla did not have things all his own way during his storied ring career going into his WBA World, WBC Silver and Ring lightweight title fight against Jorge “El Niño de Oro” Linares at the city’s Arena tonight.

Crolla (9st 8lbs 5oz) has endured defeat—against Youssef Al Hamidi (L8 in 2008), Gary Sykes (L10 in 2009), Derry Mathews (L TKO 6 in 2012) and Sykes in a return (L SD 3 in 2012’s Prizefighter: The Lightweights semi final)—as well as draws—Mathews (SD over 12 in 2012), Gamaliel Diaz (a Technical Draw in September 2014) and Darleys Perez (MD in July of last year)—yet the 29-year-old battled through adversity to take his seat at lightweight’s top table by stopping Perez in a return then halting Ismael Barroso in seven last time out.

Despite some fallow days prior to recent successes, the Mancunian plugged away—even overcoming a terrible injury after suffering a fractured skill when foiling a burglary almost two-years ago—and he hung tough with Linares in a bid to add yet another tale to a career that has hit the stratosphere in recent years.

Linares (9st 8lbs 2oz), though, has stories of his own. He is a master boxer who has woven some stirring tales en route to titles in three divisions. A WBC holder at featherweight, he also held the WBA’s Super featherweight strap and grabbed the WBC 135lb belt by stopping Javier Prieto in four in 2014.

There have been losses, too, due to reverses against Juan Carlos Salgado (L TKO 1 in October 2009), Antonio DeMarco and Sergio Thompson (L TKO 11 and TKO 2 in back-to-back defeats in 2011 and 2012 respectively).

Defeat must have been a distant memory going in, though, as the 31-year-old has rattled off nine wins since his last loss; including a 10th-round TKO win over Kevin Mitchell in May of last year—his only other visit to these shores.

The early rounds were well-fought. Too often in boxing we cherish the mighty ‘0’ of undefeated records, but both men showed that their seven collective losses had built character, rather than wrecking their careers.

Cut over his left eye early, Linares opened up in round six—landing a solid, curved right hand that had Crolla all at sea towards the end of the stanza.

In a world in which people say “I’m a big character, me” in a bid to justify their obnoxious countenances, both Crolla and Linares showed a lot of mutual respect going in. There was no need for trash talk here—their ring records had enough character to sell this one.

Named as the ‘Nicest man on the face of the earth’ in the original draft of the Magna Carta, Crolla also has some steel, Britishboxers columnist Dave Coldwell talked about his toughness earlier today. It was on display as he dragged himself back into the fight following a torrid end to the sixth.

Linares always has a world-weary look about him: he marks up, takes a few breathers and can be lazily languid, but when he opens up he is quality and the visitor stayed a step ahead of his opponent as the rounds ticked by.

WBO holder Terry Flanagan was at ringside, the loss knocks a bit of the luster off a Flanagan-Crolla all-Manchester clash, but it may still happen. Alternatively, Linares might fancy popping over against to take another Mancunian boxer.

Never one to be dissuaded, Crolla (31-5-3, 13 KOs) can take pride in his recent form; he has climbed a mountain in recent years but fell just short on the night.

We are still learning, clearly, so hold back those #Britishboxingtakingoverhashtags, but the fact that we have tempted some big names over to these shores for significant fights bodes well for the future.

On this night, thought, quality and experience prevailed; over the longer distance, lessons learned at the top-level may prove fruitful for British boxing as the years go by. British football teams had to learn similar lessons when we reentered the European Cup, it took the clubs a while to get going yet they went somewhere when they did. Recent big fights have been seen as an anomaly, when they become the norm we will see the benefits.