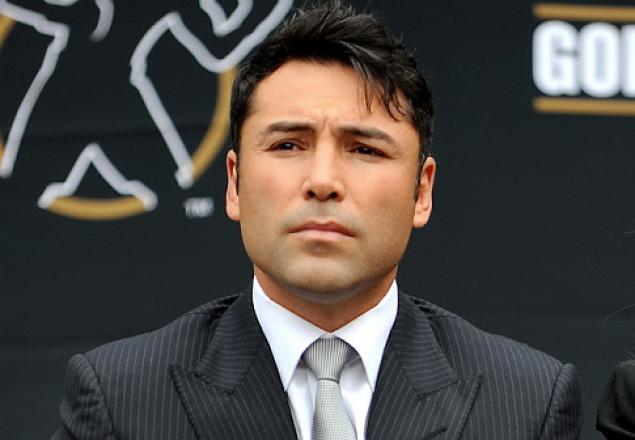 WBO light-middleweight holder Liam “Beefy” Smith (23-0-1, 13 early) defends his title against Mexican idol Saul “Canelo” Alvarez (47-1-1, 33 KOs) at the AT & T Stadium live on BoxNation and HBO tonight in a fight that many feel has come too soon for the defending title-holder.

However, Oscar De La Hoya thinks otherwise; the show’s promoter believes that Smith has nothing to lose except his ‘0’ and everything to gain on the world stage should he win or post an impressive performance in the huge venue. The former fighter told Steve Lillis of BoxNation that this one could go to the final bell if both men dig in.

Lillis asked De La Hoya if the Liverpudlian visitor has been written off prematurely by the media over there, none of whom give Smith much of chance despite Alvarez boiling himself down to 154 for the first time since 2013, when he tipped the scales at 153½ and 152 against Austin Trout and Floyd Mayweather Junior (W12 and L12 respectively) and looked far from vintage in both outings.

“When the media doesn’t know a fighter—or maybe hasn’t done their homework in studying a fighter or his fights—the media will right away talk about: ‘Well, he isn’t an opponent we know so he isn’t going to be worthy enough to beat him (Alvarez)’,” stated De La Hoya.

“As a fighter, I see it in his eyes: he is hungry, he is here to win. As a promoter, I have to sell this like there is no tomorrow, and by the looks of it we are going to have over 60,000 people screaming and chanting for their fighter.”

“It is very impressive,” he added when asked about Smith’s unfazed aura. “He is ready, he is focused and he is having a good time. He is living it all up and experiencing this great event. I think Liam Smith is here: he is ready willing and able—he is going to do the best job he can. It is going to be entertaining.”

The fight is expected to start in and around 5am U.K. time according to BoxNation’s lead anchor Jim Rosenthal. Britishboxers.co.uk will wrap things up shortly after it is wrapped up.