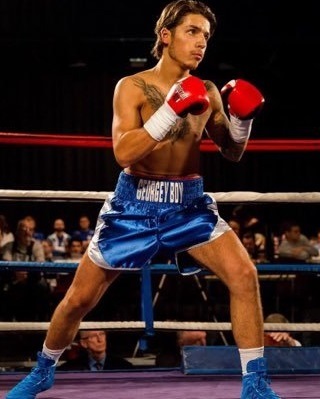 With less than four weeks to prepare, welterweight prospect George Hennon (4-1) has taken a fight on September 23rd at Grays Civic Hall on a Carl Greaves Promotions show.

The Kent puncher, trained by brothers Johnny and Frank Greaves at the Peacock Gym in Canning Town, was due to have a break after completing his first year punching for pay but when the offer came up to fight on promoter Carl Greaves’ next show in Essex, he took it without a moment’s hesitation.

“I’ve had a bit of time off over the summer,” said the 22-year-old from Snodland, Kent. “I enjoyed a holiday to Mexico for a couple of weeks but I’m glad to be back in the gym and just want to fight again now.

“Carl [Greaves] was on the phone to Johnny [Greaves] asking for another fight to be put on the show in September; I said that I’ll diet as much as I can without killing myself, so they’re looking for opponents for me at around 10st 10lbs.”

A former kickboxing champion, Hennon adapted to the pro’s extremely well by winning four of his five fights since his debut back in June last year.

The youngster from Snodland suffered his first and only defeat to eight-time national amateur champion Sam Ball (6-0) via a third-round stoppage at the SSE Hydro in Glasgow on May 28th on the undercard of Ricky Burns’ history-making triple world title win.

Hennon got straight back to winning ways in his last bout in July by defeating Plymouth’s Ross Roberts (1-6) 40-37 on points to move to 4-1 and had planned to rest after such a busy campaign.

“It’ll be another four-rounder and will just be good for me to get out and get another win on the record,” he said. “I had planned to wait until November but I just want to get back in there.”

Hennon discussed his plans for the rest of the season, “I want to get out this time and then one more fight before the end of the year in November.

“I plan to step up to six-rounds next, then step up to eight-rounders next year and start looking to challenge for titles.”

Hennon’s next fight in November will be back at the Grays Civic Hall in Essex for the fifth time in his career; the venue has quickly become known as his fortress to his army of fans from Kent.