Joe Murray: “I want to fight Scott Cardle, he’s got a title he doesn’t deserve!” 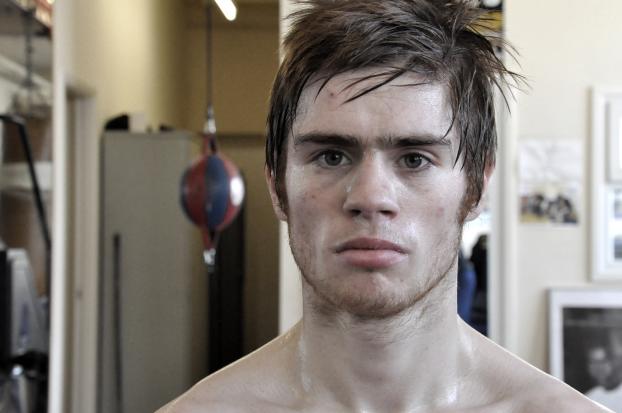 So far, 485,595 people have watched a video of Joe Murray’s spectacular knockout of Rashid Kassem. Murray (19-2, 8 KO’s) was three one sided victories into a comeback when he was offered the chance to swap the blue corner for red and travel to Denmark for a fight with one of Europe’s heavily touted lightweight prospects. As gambles go, this one paid off big time. Check the video for yourself, the number of views is probably up to 490,000 by now.

‘I think I’m the type of fighter who performs better on big shows. I’ve been chasing down titles for a long time but I think a lot of British fighters avoid me and won’t come near me. This has relighted me.’

“We took gamble and it’s paid off,” Murray told BritishBoxers. “People underestimate me. I was telling everybody to get on me before I went out there. I was 3-1 to win and those odds in two horse race are massive.

“People kept telling me that he had got to the quarter finals of the world championships; I got to the semi finals. We were very confident that we’d go there and cause the upset.

“It went the best way it could have gone and it’s relaunched my career. I’d been on three small hall shows before that but I think I’m the type of fighter who performs better on big shows. I’ve been chasing down titles for a long time but I think a lot of British fighters avoid me and won’t come near me. This has relighted me. Because so many people have watched the knockout, people are starting to say that I should be fighting for these titles now. It just gives me that little extra push to get into title contention and when I do get a chance, I’ll grab it with both hands.”

Murray vanished after a stoppage defeat in a rematch with Liam Walsh in February 2015. He reappeared in April and has been a regular on Steve Wood’s VIP shows since. Over the past six months, Murray has quietly gone about rebuilding his career. Quietly in terms of his media profile, that is. ‘The Genius’ is a livewire on fight night. The 29-year-old usually charges into the ring to the strains of Cotton Eyed Joe, flings his straw hat to the back row of the arena and stomps around glaring at his opponent until the bell rings.

In Frederickshavn, it was he who appeared to be the calmer of the two fighters. Rather than using his feet, letting his head clear and waiting for the perfect moment to deliver the shot which dropped Kassem during a tumultuous opening round, the ‘old’ Murray would likely have reacted violently to being badly rocked by almost the first punch of the fight and ended up getting stopped. In fact, the old Murray might also have reacted violently 24 hours earlier.

“When I boxed Walsh the second time I think I left a lot in the dressing room if I’m honest,” Murray said. “We’ve been working on staying calm. It’s nothing personal. I’m enjoying my ring walks. I take every moment in and I feel good. Staying relaxed has become part of our game plan now.

“We might have had a bit of a fight at the weigh in – I thought he got a bit close and put his head towards me – but the Joe Murray of two years ago would have tried knocking him out there and then. We kept our calm. He was jumping around and he was too intense when he was in my presence. I think he was very nervous around me. Even in the ring at the start of the fight he was bouncing from corner to corner. He burnt a lot of nervous energy up.

“Everybody knows I was out of the ring for a year. I couldn’t make the weight anymore and now I’m up at lightweight I’m a lot bigger and stronger. Before the second Walsh fight I was literally going to the gym making weight and then seeing what I could do. Now, I’m going into the gym and learning. You could see n the last fight that my blocking and counters were coming off. I have that grit in my teeth to go and rip titles off people.

“I’ve had four fights in five months. it’s the busiest I’ve ever been as a pro. I can’t thank Steve enough for that. I’ve always said that an active fighter is a better fighter. I’d be training every day and not getting fights. I just got a bit sour with it and wondering why I was doing it. I’ve always enjoyed the actual fighting and as an amateur I was very busy. I had a meeting with Steve and he told me that if I was in the gym, he could get me fights and that I had to be willing to take opportunities. I think it took us two minutes to say ‘Yes’ to the Kassem fight. People asked what I would get out of the fight but it was a chance to take on an unbeaten kid who was supposed to be the next big star. I knew I could beat him. I fear no lightweight.”

“The first fight with Walsh, I lost a split decision that could easily have gone my way. Then I didn’t fight for a year. I had two rounds and then got offered the rematch. If you’re a fighting man, of course you’re going to take it. I’m willing to go to the other man’s back yard and give it my all. That’s how we work in our gym. If my best isn’t good enough, so be it but we’ll always give our best.”

‘Time will tell if Scott Cardle can find his balls and comes and fights. You can’t make somebody fight if they don’t want to fight but I’m next in line. Come and fight me.’

Murray is a born and bred Mancunian but loves to escape to the country, spend time with his horses and take part in drag hunting. Usually, any chase involving a resident of Levenshulme in South Manchester would take place on foot or BMX bike and the Mancunian would likely be the one being pursued. Murray is used to chasing however and has picked up the scent of his prey.

“I think I’m British title level. I’m next in the rankings after Luke Campbell and I don’t think Eddie Hearn will be putting Scott Cardle in with Campbell. I think Cardle needs to defend his title once more before he can keep it so why not have me and Cardle go at it? I don’t think they want any part of me at the moment. Time will tell if Scott Cardle can find his balls and comes and fights. You can’t make somebody fight if they don’t want to fight but I’m next in line. Come and fight me.

It may be getting a little late in the day to arrange a British title fight but the Anthony Joshua–TBA card in Manchester on December 10th needs to begin taking shape soon.

“That sounds perfect,” Murray finishes. “You give me a date for a fight with Scott Cardle and I’ll be there and I’ll take the title off him.”