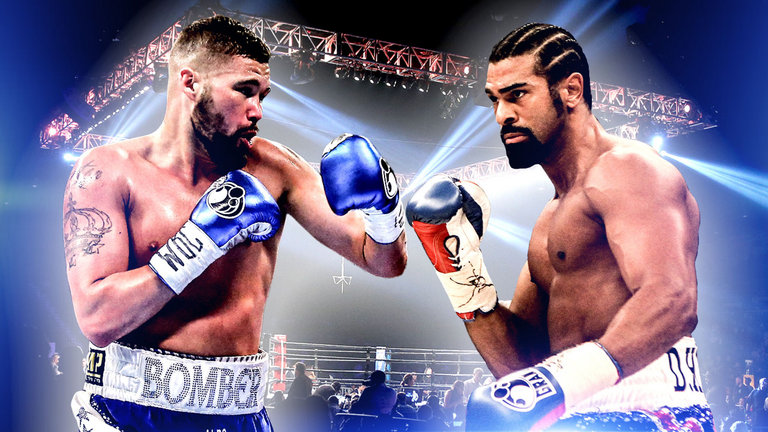 Pantomime season is upon us, and it seems no one is more enthused about it than rivals David Haye and Tony Bellew who are playing The Ugly Sisters in Eddie Hearn’s latest bawdy production. They shall both go to the ball, which is to be held at the 02 Arena in London on March the 4th, and face one another for the chance to be cast in the leading role in Matchroom’s next event, with Haye eyeing Anthony Joshua and Bellew possibly looking to unify back down at cruiserweight.

Despite the fairground-attraction circumstances of this fight, things took a more serious turn when an altercation at a press conference became physical, with Bellew shoving the Londoner backwards before being punched in the face for his efforts. As much as this is a ‘one-off’ fight (as pointed out by John Evans in a superb article for British Boxers) the pair of them really want it to be taken seriously, and are putting in extra effort to make the bad blood between them appear real enough to be marketable. Taking them at their word, I answer a few questions about the matchup below.

In all honesty, probably not as real as we are being led to believe. They certainly don’t like one another, but it isn’t exactly Barrera-Morales all over again. Those two were in a heated rivalry that produced two Fights-of-the-Year and one of the Greatest-All-Time-Fights, elevating them to legendary Mexican greats. Bellew-Haye is the product of a Twitter feud gone wrong, which has now escalated into an interesting but unnatural fight for both men. Still, you need to really sell a fight these days if it’s going to be a pay-per-view attraction, and a little conflict goes a long way in terms of boosting box office numbers.

Is Bellew a good opponent for Haye?

Bellew has looked excellent since moving to cruiserweight, having won all but one of his fights there by knockout, including both his title fights. But although he managed to bring his power with him from 175lbs, facing a fully fledged heavyweight is a different matter. Haye has been one since 2008 and fits the division well, knocking out all comers apart from Nikolai Valuev in 2009 and losing to then-overlord Wladimir Klitschko in 2011. Putting Haye “and that stupid haircut to sleep” will need the punch of a lifetime from Bellew, who could find the heavyweight waters deeper than he thinks. Haye, who possesses punch power, speed and timing, will rightly enter the ring as the favourite when the two meet.

Is the fight beneficial to either man?

Financially, certainly. Haye still presents a big threat, but he is one that the belt holders can safely ignore for the moment by claiming that he hasn’t earned the right to face them since his comeback (which is true). With Tyson Fury out of the picture, David Price yet to re-establish himself and the risk/reward factor of everyone else difficult to calculate (as well as being otherwise engaged), Bellew may indeed be Haye’s most lucrative option. The reverse is definitely true; cruiserweight is a tough sell even in Europe, and unification fights between Bellew and Oleksandr Usyk or Denis Lebedev will need time to gain interest, and even then may not appeal as much as a meeting with Haye. There are downsides, however. Haye won’t get much credit for beating a cruiserweight, and Bellew almost certainly will not stay a heavyweight after facing Haye regardless of the result. Money aside, this fight is for bragging rights and that’s about it.

Do the public want to see it?

Well… erm… yeah, why not? It will likely produce fireworks while it lasts, and the general consensus is that one of them will have the other in trouble should they connect cleanly. If people want to see Haye recapture past heavyweight glories or Bellew unify at cruiserweight then this

probably isn’t the fight to be asking for, but if people want to see a decent scrap that will almost certainly not go the distance, then by all means, let’s go for it.

What awaits the winner?

That’s a bit of a problem, although more so for Haye than for Bellew. The other heavyweight title holders will shrug their indifference if Haye beats a cruiserweight, and will dismiss him altogether should he lose. Bellew’s stock will rise considerably with a win, but whether he can use that as leverage in the division below remains to be seen (although it is hard to see how it would be detrimental to his chances). Out of the two of them, the Liverpudlian has the most to gain from this fight, while the Londoner needs to win in impressive style if he is to reap any sort of benefit.

And so to brass tax. As things stand, Haye remains the overwhelming favourite despite the protests from Bellew’s camp. While it’s true that Haye hasn’t been in a proper contest for several years now, he still possesses phenomenal power and speed even at 36 years old, and blitzed two comeback opponents easily to prove that he, although having declined since his peak, is several leagues above the level of fringe contender. Bellew may frustrate David at the press conferences, but when the cameras turn off and the doors close, Tony needs to take him very seriously indeed because he has a formidable task on his hands. He deserves a lot of credit for taking such a high risk fight, because the risks are very real. Should he upset the odds, the spoils of victory will hopefully amount to more than just a good night

The fight will be shown on Sky Box Office.