Crolla: “I want the belt back, simple” 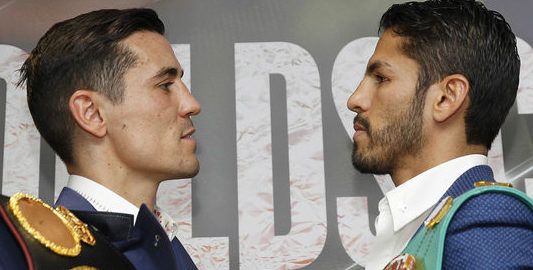 At the Matchroom Boxing press conference in Manchester this week, WBA Lightweight world Champion Jorge Linares and former title holder Anthony Crolla now challenger, came together again to formally announce their rematch which will take place back at the Manchester Arena on Saturday, March 25th.

Linares (41-3, 27 KOs) narrowly outpointed then defending champion Crolla (31-5-3, 13 KOs) in September last year at the same venue. Although Mancunian Crolla performed very well on the night, it was the Venezuelan former three-weight world champion who did enough to claim the belt over the 12-rounds.

Crolla, 30, has proved countless times that when his back is against the wall or he’s been written off, he always seems to comeback stronger and he is doubly determined to do just that again in the return with Linares.

“I want the belt back, simple. Fighting for these prizes in front of us is huge. I’m so lucky to have a second chance and it’s one I have to take.” said Crolla.

“It was a special night last time, great crowd and it’ll be even bigger this time. The setting was perfect but I lost my belt. I lost to a great fighter but I don’t celebrate losing, I don’t want to feel it again and I want to go down in history by beating a great fighter.

“I am better in rematches and I’m locking myself away to work harder and smarter to make sure these belts stay here.

“Jorge is the best and I want to be the best – beating him stakes my claim. I didn’t win the first one but I had success and I can work on that.

“We’ve both got great teams behind us, and I believe if I make the right changes for the fight I will take the titles.”

But Linares is coming to Northern England in no mood to surrender what he worked so hard to capture the first time around. In his home land he is a national hero and he vows to return victorious again, as he did after the first encounter.

“I wasn’t supposed to win the first fight, but I’m glad I did so I can come back and do it again.” said the 31 year-old Linares.

“The belts mean so much to me and my country, and I am going to work very hard to make sure that I take them home again.

“It’s a new year and a new day. Anthony is going to be better and hungrier, and that means I will work harder, come with more skill and an even better game plan to win.

“I hope to see another huge crowd in Manchester and we’re going to provide the fans with another beautiful fight.” added the defending champion.

The First Fight: Crolla-Linares I