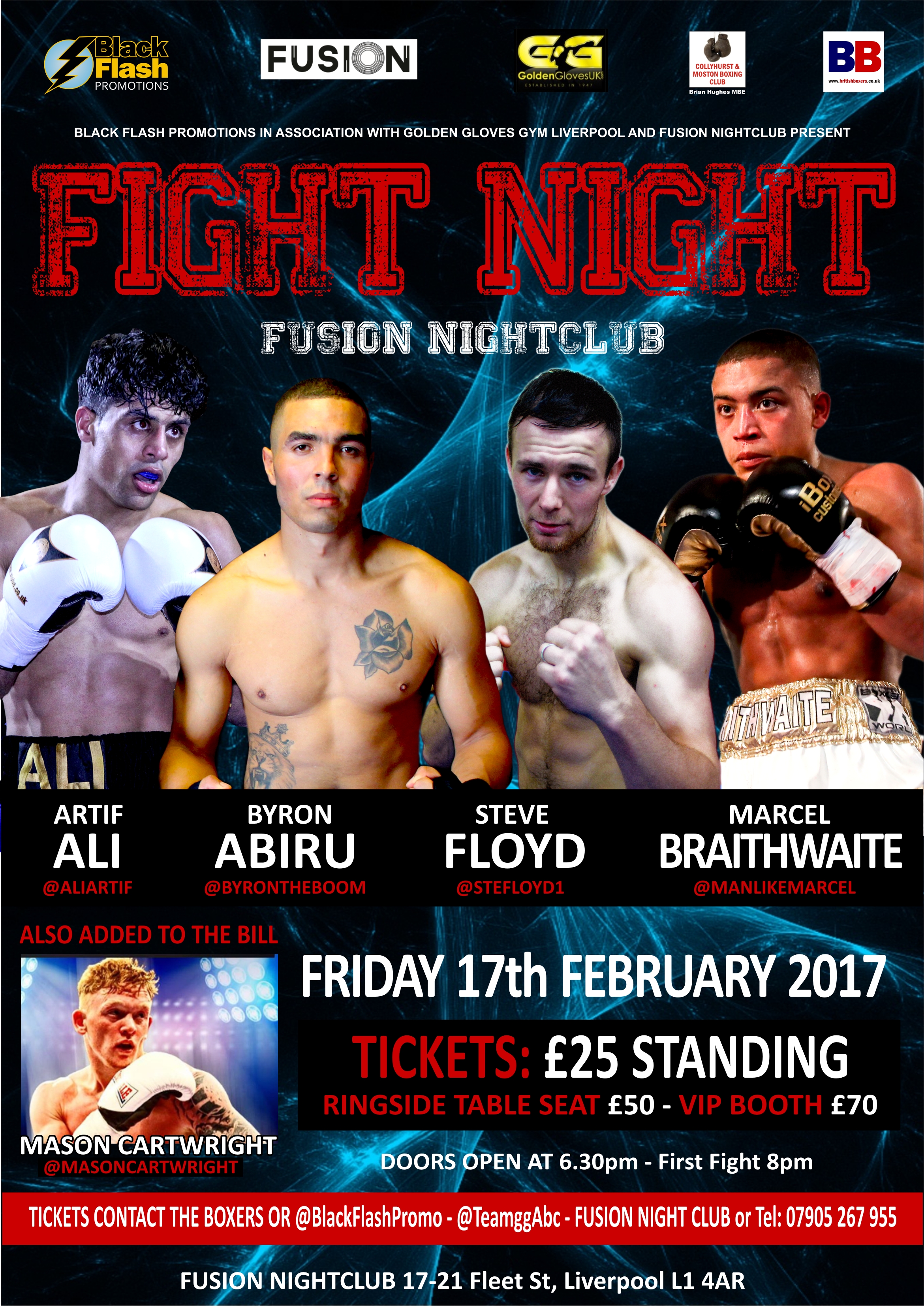 Professional boxing made its debut at the Fusion Nightclub in Liverpool in November last year when Black Flash Promotions in association with the Golden Gloves Gym held an event to give local boxers the chance to make their debuts on their own patch, as well as showcase other rising talent.

The Fusion already supports the Golden Gloves Gym in Liverpool, run by Wayne Smith, and over the years it has played host to some of their amateur shows. With the gym recently becoming Pro-Am to keep the fighters in-house as they enter the paid ranks, it was a natural progression for them to follow suit and remain to support the local boxers as they progress through their careers.

On February 17th Black Flash are back under the disco lights at the Fusion when they present another quality bill featuring more local Liverpool and Northwest talent. Super slick highly talented super-flyweight prospect Marcel Braithwaite (2-0) will have his third professional fight after impressing in his previous two outings; he is showing the potential his coaches and promotion team knew he had and it wont be long before he is a name fight fans from further afield know about.

Also on the bill is Braithwaite’s Golden Gloves gym mates, talented lightweight Steve Floyd (1-0) and highly touted debutant Byron Abiru. Floyd made his impressive debut at the Fusion Club on the last show and will be looking to keep the form and momentum going as he moves forward. Abiru, grandson of former tough Liverpool/Nigerian fighter Orlando Paso is another Golden Gloves boxer which promising things are expected.

Added to the bill are another two boxers who have big future plans, Super featherweight Artif Ali (9-1) from Accrington and Ellesmere Port’s unbeaten light-middleweight prospect Mason Cartwright (7-0-1) who has his first fight of the year against the dangerous Mancunian Darryl Sharp. More names are expected to be added to the bill, details to follow.

A PRESS CONFERENCE for the show will be held at 1pm on Wednesday 25th January at the Fusion Nightclub 17-21 Fleet St, Liverpool L1 4AR to officially announce the event and speak to the fighters and coaches in attendance.  – All press are invited to attend and anyone else wishing to attend are welcome to come along to meet the boxers after the presser for photo opportunities.

All tickets are available from the boxers, the Fusion Nightclub or by calling 07905 267 955