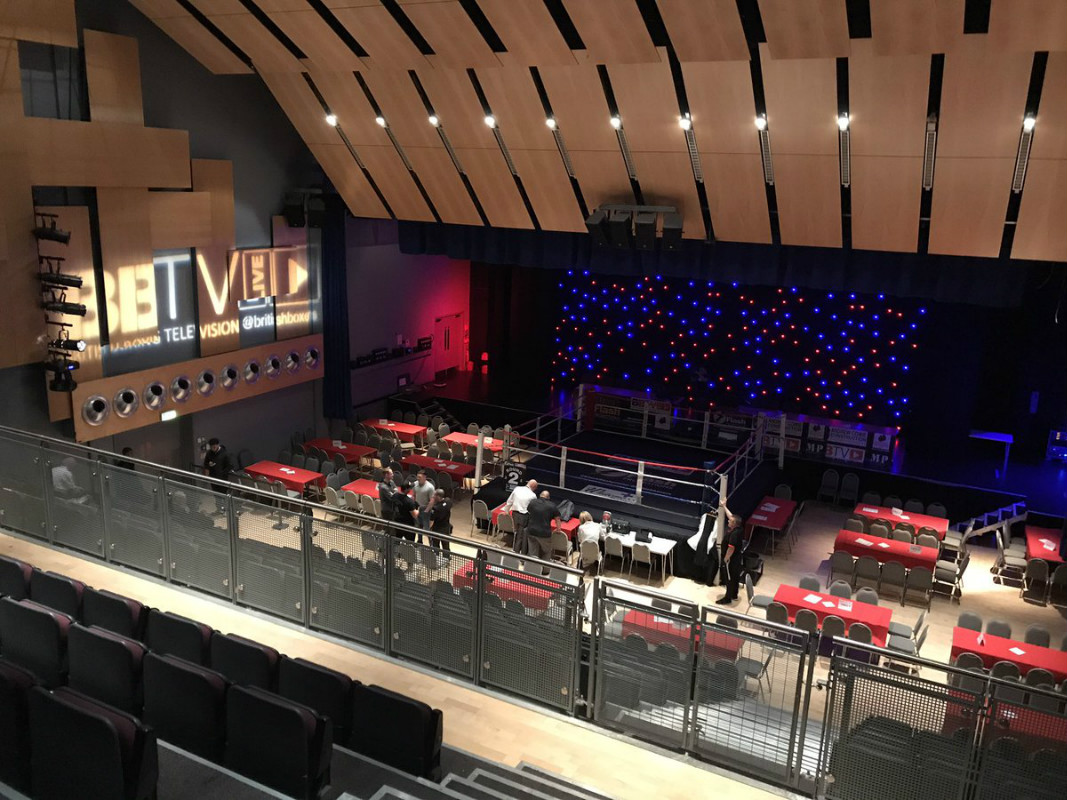 On an evening where the eyes of the boxing world were perhaps fixated more on Sheffield and the fortunes of Kell Brook, a decent turnout of local boxing fans filled the Middleton Arena; a familiar venue for Black Flash Promotions by now.

The proceedings tonight began by the traditional ten rings of the bell; met with a sombre and poignant silence and brought to an end with raucous applause. This was a fitting an emotional start to the evening and a reminder, as if any was needed, that the city of Manchester is a fighting city that remembers its own.

The first bout of the evening, was an outing for a fighter that I have seen quite a bit of recently: Salford’s Chris ‘Fatboy’ Monaghan. Taking on Northern-Irishman Casey Blair, this contest was scheduled for four 3-minute rounds.

Straight from the bell, this fight began as it was to carry on for the duration- Monaghan using his superior reach and footwork to pepper Blair with a good variation of shots- especially utilizing his jab and plenty of left hooks to the body.

To his credit, Casey Blair seemed to take every shot without sustaining any major damage- attempting to deter Monaghan by closing the distance and getting in his face.

In the end, it was Monaghan as expected, with the bout being scored at 40-36. Good to see Chris getting the W under his belt.

Next up was a fighter I was looking forward to seeing– Hatton’s Gym light-heavyweight Jake Haigh. It was clear that Haigh was the bigger man here, with his opponent Mitch Mitchell giving away a significant height advantage.

Haigh appeared very relaxed from the get-go, getting busy with an effective jab and well-timed one-two’s. His accuracy seemed to improve as the four-rounds progressed, beginning to find joy in the third, where Mitchell took a knee for an eight-count, as well as sustaining a cut above the left eye.

To his credit, Mitchell managed to hang in there until the final bell, with the fight being scored at 40-35 for Jake Haigh.

On to Lyndon ‘King’ Arthur, looking to add to his record of five wins by five knock-outs. His Lithuanian opponent, Remigijus Ziausys had the look of a man who knew he was in for a tough evening, and he was to be proven right.

As in previous fights, Lyndon’s jab and the way he can utilise to create distance as well as to connect more stiffly when he chooses to, offered little chance for his opponent. There was decent variation in shot selection too, with some cracking body shots on display. The right upper cut was used at times too, and by the third round the sense was that this fight had perhaps run its course, with Ziausys taking some brutal shots.

It was a big right hand that eventually sent the Lithuanian sprawling- with the fight being stopped right at the end of the third. It will be fascinating to watch how Lyndon Arthur’s career progresses against more accomplished fighters in this division.

On to the main event of the evening then, featuring the recently crowned English super-welterweight champion- Middleton’s own- Matthew Ryan. His opponent tonight was one that Matty would have known extremely well- Willie Warbuton, who on his day is certainly capable of causing problems for most fighters at this weight. (Ryan’s English belt was not on the line)

Under the tutelage of Pat Barrett and Paulie DaSilva, Matty has progressed hugely as of late, and seems to enjoy sitting down on punches and trading shots more than previously. With Warburton, too seemingly up for it on the night, we had all the makings of a war in this six rounder- and we got one!

From the off, both fighters were committing to punches and throwing with significant power and intent. I was impressed with Warburton’s movement, evading and countering very smoothly to pressure applied by Ryan early on.

Both fighters were landing and taking serious punishment by the second round, with Matty Ryan attempting to control the fight by jabbing and moving, but being unable to fully cut off the ring. There were even some shades of the Sonny Upton fight for Ryan, with Willie Warburton deploying similar counter-punching off the ropes as in Matty’s title fight previously.

The furious action carried on in to rounds four and five, with the fighters picking up a round each on my score card. By the sixth and final round the crowd in the Middleton Arena had been treated to an absolute belter of a fight, with the English champ making sure the score-card would favour him by ending on some big three punch combinations late on. In the end, it was Ryan that emerged victorious, but it was a close one- with the scores at 48-47.

Once again, it was a local show that certainly delivered the goods. For any fan of professional boxing there is no reason I can think of why you shouldn’t make your way down for the next one.