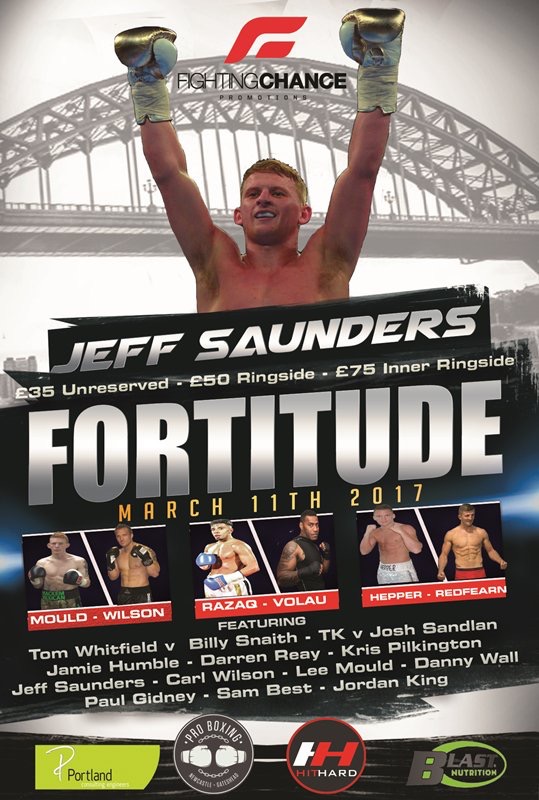 Snaith joins his new stablemates Jeff Saunders, 9-0 and Neil Hepper, 8-4 on an exciting, stacked bill after he recently joined the Wraith bandwagon along with Fighting Chance prospects Kyle Redfearn, 1-0(1), Jamie Humble, 2-0 and Jone TK Volau, 4-1 among numerous others.

Speaking about his fighters and the upcoming show manager-promoter Steve Wraith said: “Hepper continues to be much sought after but we are looking after his interests and looking to build his record before looking at the bigger picture.

“Snaith is head strong and determined to achieve all that he can in a short space of time. He approached me asking if I would be willing to help him achieve his ambitions and there was no hesitation.

“He comes from one of the best gyms in the north-east (Cope’s) and is now at another with Jeff Saunders, Mark McGuiness and Ian Glass looking after him; I feel that he has some exciting nights ahead.

“I’m also hoping Wilson is back and ready to rumble after being hit with a bad chest infection with him looking to build on his great stoppage win at St James Park last year.”

The show marks the start of a new year in which he, his staff and fighters can continue to flourish in the spotlight.

He added: “Fighting Chance are proud to be returning to Tyneside for this our first show of 2017, we are pleased to be working with Steve again as he adds some exciting additions from his stable to the show.

“Headlining will see Tom Whitfield against Billy Snaith in a super welterweight contest and Basi Razaq versus Dwayne Sheldon at welterweight.

“I am particularly excited to see Kyle Redfern take on Krzysztof Golec who caused a major upset in his last outing in Newcastle beating Sam Best whilst Jamie Humble will continue his apprenticeship as he looks to make rapid progress towards titles this year and TK will be looking to make a statement and get back to winning ways as he looks for a title opportunity in 2017.

“We’ve also made offers to several fighters and their managers for Lee Mould and are hoping that we can get him a title opportunity on this bill, if not he will certainly be boxing for a title headlining our next show in May.”

Tickets for ‘Fortitude,’ on March 11 at the Walker Dome, will be available soon from the fighters, online, and from the venue priced at £35 (standard), £50 (VIP Ringside) and £75 (VVIP front row ringside & corporate lounge).