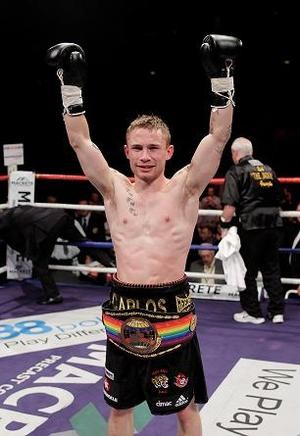 The exciting Belfastman, who also holds the European title, is fast approaching a world title shot and must beat the tough Orozco to remain on track for a potential shot later this year.

Orozco, from Rawson in the San Juan province, is the IBF and WBO Latino Champion and comes into the fight with a record of 20 wins from 24 fights with 2 losses and 2 draws. The hard-hitting 27-year-old poses a serious threat to Frampton’s unbeaten record with 4 out of his last 5 opponents stopped early.

Frampton, who has scalped Mexican and Venezuelan challengers in his career, is looking forward to a showdown with the Argentinian warrior.

He said, “I think it will be a very exciting fight. From the footage I have seen of him he seems keen to get in to tear ups, which is what I like, someone who’ll come and have a fight. I think our styles will suit each other and it should be an exciting fight.”

Frampton’s manager Barry McGuigan added, “Fabian Orozco, is a talented hard punching box/fighter who is coming to Wembley on the 20th of July believing he can beat Carl Frampton. He is rough and uncompromising and will definitely come to fight. Carl must win all of his fights as he gets closer to that World Title he craves. Orozco’s the IBF Latino Champion at Super Bantamweight, he’s big for the weight at 5 /7.5 and he looks every bit as intimidating as Frampton with his body art. they jumped at the chance to take the fight and we know Carl has a scrap on his hands on July 20th and he wants to show the Wembley audience his skills and we feel Fabian Orozco will bring the best out of Frampton and give the Wembley audience an enthralling fight.”

Headlining the action-packed show is the big heavyweight Trans-Atlantic showdown between Dereck Chisora and unbeaten Malik Scott. Billy Joe Saunders and Gary O’Sullivan clash in a battle of the undefeated fighters with Saunders’ WBO International Middleweight title on the line; one of Britain’s hottest and most exciting young prospects, Ellesmere Port’s Paul Butler, plus London super-middleweight star Frank Buglioni.