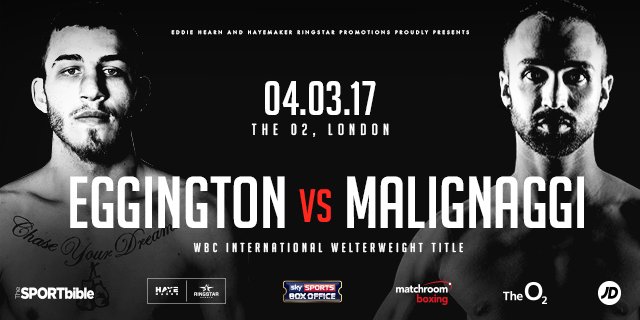 Sam Eggington will defend his WBC International Welterweight title against Paulie Malignaggi at The O2 in London on Saturday March 4, live on Sky Sports Box Office.

Eggington landed the title in a fight of the year contender with local rival Frankie Gavin in October with an eighth round stoppage in Birmingham and the 23 year old is thrilled to be facing the former two-weight world king on a huge card in the capital.

“This is the big name and big card that I’ve wanted for some time,” said Eggington. “I’ve asked for these sorts of fights for a while, I got Frankie and now I’ve got Paulie. He’s going to be the biggest name on my record, you just have to look at what he’s won and who he has boxed to see that, but I have asked to fight him for a while now and I am confident that I can beat him, and beating him is a big scalp on my record and it puts me in that World bracket which is where i want to be.

“He’s good at what he does, he is a bit like Frankie really and fighting him has put me in good stead for this one, he’s not the biggest puncher and he’s smaller than Frankie, but he’s won World titles and been in with everyone.

“Paulie’s been at World-level for so long that he’s got all the tricks and probably got more to pull out on the night, so I know it’s going to be a big test and it’s one that I’m going to rise to. This could have been a fight without a title, Paulie is the man I want to beat – that name on the record will make people stand up and take notice and will make a splash in the US too. It’s a fantastic box office bill and I’ve never been on a bill of this scale so it’s really exciting for me.”

Malignaggi held World straps at Super-Lightweight and Welterweight and brings both a CV packed with the biggest names in the sport and ambitions to return to World title level.

“I am excited as ever to once again return to the UK and fight in front of the most passionate fans in the world,” said Malignaggi. “I know Eggington is young and hungry but my experience and craftiness will be too much for him to overcome.”

“What a fight this is and what an opportunity for Sam Eggington,” said promoter Eddie Hearn. “Paulie Malignaggi is one of the biggest names and personalities in the sport and still remains full of skill, heart and desire.

“Sam has consistently provided fight fans with entertainment and after his fight of the year contender with Frankie Gavin, this is an incredible opportunity to announce himself on the world stage. March 4 is going to be an incredible night at The O2, live on Sky Sports Box Office.”

Eggington’s clash with Malignaggi is part of a huge night of action in Greenwich as bitter foes David Haye and Tony Bellew meet in a Heavyweight grudge match and Ohara Davies and Derry Mathews settle their social media feud with Davies’ WBC Silver Lightweight title on the line.