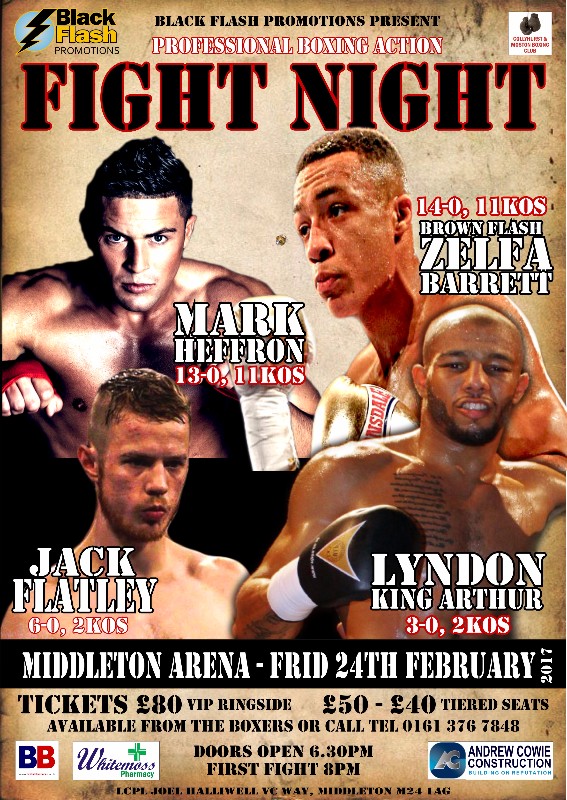 There is a big, small hall show coming your way this month in Manchester when Black Flash promotions present what is expected to be a cracking bill of unbeaten prospects, featuring some of the Northwest’s rising stars and possible future champions of the sport.

UK Top 10 rated Super middleweight Mark ‘Dynamite Kid’ Heffron (13-0, 11KOs) will look to get 2017 off to a bang with another win as he seeks a shot at a domestic title this year.

Heffron is one of the biggest punching fighters on the circuit and is hot on the heals of the top men in his division. “I am ready to take on the best, I want to be involved in big fights now—this has to be my year and it starts on Feb 24.” said Heffron.

“I believe I will be a world champion, but I would love to fight for the English, British and European titles and win them. To do that I will have to face the best and I cannot wait to test myself, I feel I’m ready now to get in the mix and smash it.”

Highly rated Super featherweight Zelfa ‘Brown Flash’ Barrett (14-0, 8KOs) continues his busy career with another outing at the Arena where he made his pro debut in October 2014 and calls home. Barrett has blazed through his first two years as a pro and sees this year as the one he steps up in class, he says by the end of the year he will be ready to face anyone and fight for titles.

“I am really looking forward to fighting at the Middleton Arena again, that place is special to me, I had my pro debut there and fought there five times up to now,” said Barrett. “It is always a brilliant atmosphere.”

“This year is the year I step on the gas, move up the levels and look to push on to titles. I was recently put forward to fight for the English title and I was happy to know the Boxing Board are noticing me and deem me as suitable to contest it,” he added.

“But I always go with what my team says and the plan is to have a few more fights before making my move. The chances for titles will always be there if I continue as I am doing and I will be ready to take them and keep them when the time is right.”

The ‘King’ stormed to his first three wins at the back end of last year and is back here early in 2017 as he looks to keep busy with regular fights.  “It is all about getting the rounds, learning the professional game, gaining experience and moving up the ladder one step at a time.” said Arthur.

“I love being a pro boxer now and training and living the life as one. I am dedicated to it and I am fully focused and determined to reach the top in this sport.”

A recent addition to this fight card is Bolton’s unbeaten well supported and well equipped middleweight Jack Flatley (6-0, 2KOs) who is tipped to have a very bright future ahead of him. The popular Flatley has been very impressive in his fights to date and could be a name that becomes very familiar and popular to an even wider audience in the coming years.