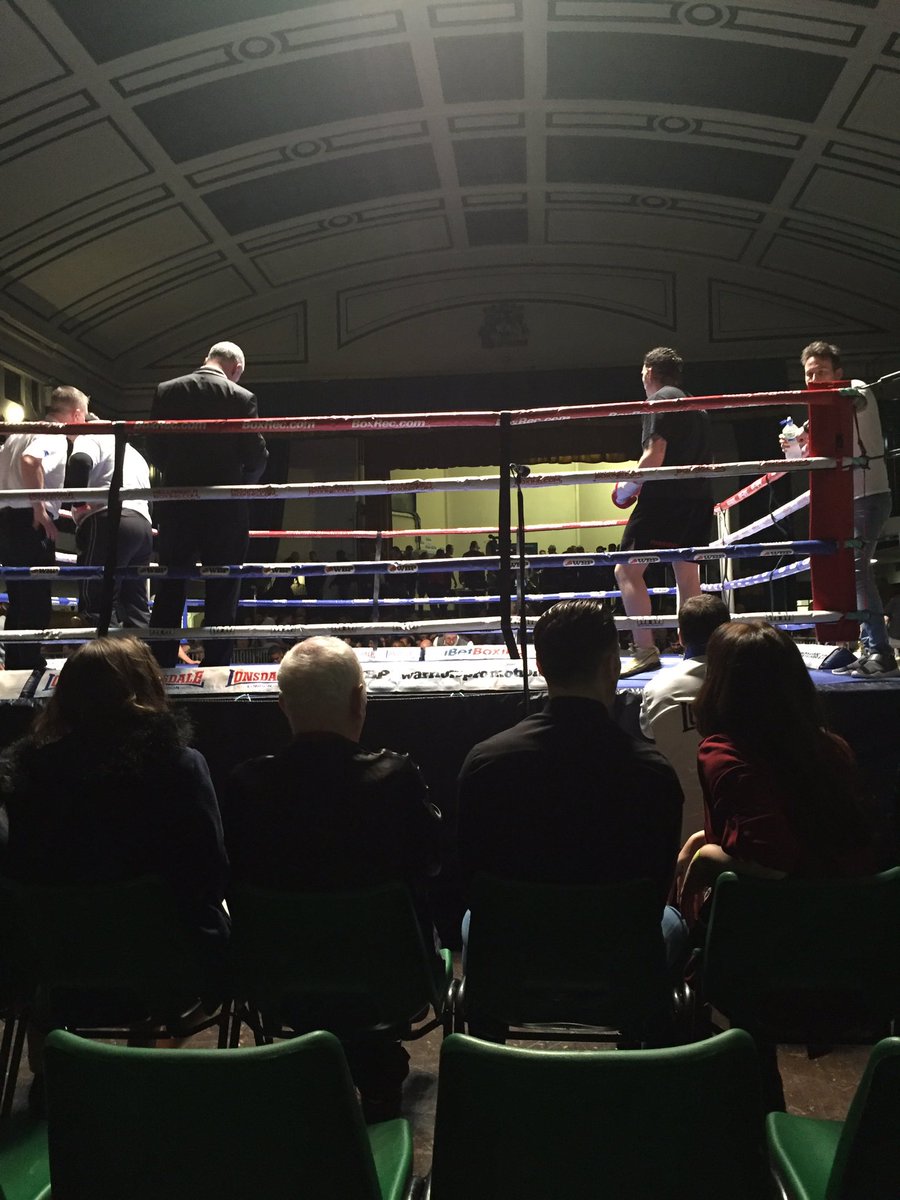 Reading’s Asinia Byfield produced a fantastic performance to stop a brave John Brennan early in the sixth round to retain his Southern Area super-welterweight belt at a rammed York Hall in Bethnal Green on Saturday in another small hall gem.

Byfield, a classy switch-hitter, used his jab to good effect in the opener, dodging Brennan’s big power shots as he did so. But suddenly, in the second round, the fight erupted into non-stop action; Brennan, applying constant pressure, was hurt in a heated exchange, and Byfield looked to capitalise by throwing snapping punches from awkward angles. Brennan, from Slough, worked doggedly to bring things back into his favour and by the end of the third was seeing some rewards for his efforts after Byfield, outgunned, went to the ropes to try and box on the back foot.

The pair shared excellent, brawling exchanges throughout and neither had any round entirely his own way, but by the fifth, Byfield looked to be feeling the pace of the fight as Brennan, his face marked by rasping counters, started to grind the champion down. Then, in another sway of fates at the beginning of the sixth, Brennan was hurt once again after leaving himself open following a shootout, and Byfield pounced. Throwing big, looping shots that staggered the challenger across the ring, the referee had seen enough and called a stop to a superb contest that deserved the venue-wide standing ovation it received. Wonderful from both men. Byfield is now 12-1, Brennan falls to 7-5-1.

George Jupp added another win to his record by outpointing tough customer Damian Lawniczak over six rounds. Jupp started well, with jabs and and movement proving the difference early on. However, he had to use more tools than he would have liked to keep the rugged Pole at bay, as overhand rights began to find their way around the guard of the Belvedere man in the second round. Jupp responded by upping his work rate and enjoyed success with hooks to the body, but could not dissuade Lawniczak, who made the home fighter toil for his win. By the fourth things had become a little untidy, and referee Kieran McCann had to work hard to keep the action from losing meaning. Jupp finished the fight boxing sensibly on the back foot, passing a good test in preparation for his rematch with Mitchell Smith in May. Jupp continues the recovery from his loss to Miguel Berchelt in Mexico by advancing to 15-3, while Lawniczak new record of 3-21-4 doesn’t do him justice.

Nobody likes facing guys like Ryan Hardy, but Kian Thomas dealt with him superbly to stop him in the final round of a scheduled six. Hardy, part boxer part carnival attraction, took every opportunity to goad and frustrate Thomas, who was landing cleanly but with no discernible effect. In the second round Hardy enjoyed some success of his own, with double jabs and overhand rights finding their way through. Thomas responded with higher quality boxing, to which Hardy danced and Ali-shuffled in mockery. However, rapid jabs and a vicious uppercut started to cause reddening around his eyes in the third. Thomas, using feints and speed as the keys, began to unlock the Yorkshireman’s defence, and by the fifth had his opponent, perplexed and cut above the right eye, right where he wanted him. Hardy was felled by a counter-right hand early in the sixth, and was prevented from receiving further damage when the referee cut short another blistering barrage. At 7-0, Thomas will look to step up in class soon, while Hardy, now 8-13, earned his evening’s pay.

Robin Dupre (12-0) overcame Dimitrious Neroutsos (4-5) in a messy cruiserweight affair over four rounds. Dupre’s jab proved the difference, but found himself tied up or out of range when he looked to apply the heavier shots. Dupre had the right intentions, but couldn’t apply them against a tricky opponent. A fired up JJ Hughes (1-0) defeated winless Scott Hillman (0-16) in his four round debut, starting fast and not taking much punishment in return, a pattern which continued throughout the contest. Hughes received a large cut over his right eye in the second round due to a head clash, and an otherwise routine performance was marred when Hughes, winner by a margin of 40-36, insisted the clash of heads was deliberate, whilst Hillman (who pointed the cut out to the referee in a good show of sportsmanship) protested his innocence.

Richard Riakporhe (3-0) stopped the durable Istvan Orsos (15-39-2) at 2:54 of the first round after a right hand to the head dropped the Hungarian heavily. He rose, but couldn’t put up enough of a defence to continue the contest. Riakporhe, on the front foot and with 2 KOs in 3 wins, is someone to watch.

Josh Ejakpovi (6-0) also used his back hand to good effect to outscore Mario Petrov (3-7) over four. After Ejakpovi started the first two rounds well, Petrov put up little resistance in the last two, allowing the Marylebone man to coast to a deserved 40-36 victory.

John Harding, making his debut, defeated Iain Jackson (5-33-2) over four in a sobering affair. Despite good intentions from both, their styles couldn’t gel into an enjoyable contest, with fouls aplenty punctuating some otherwise decent action. Harding received a warning in the fourth round for holding his opponent’s head, prompting him to box more tactfully and take the bout with a 40-37 score.

Gelasius Taaru (2-0) made Stefan Sashov (2-9) turn things scrappy from the beginning. Unable to deal with Taaru’s power or speed, the Bulgarian spoiled for the duration, earning a point deduction in the third. The fight was stopped shortly thereafter to the relief of the crowd, who were sympathetic to the cause of the home fighter.

John Hayes (6-0-1) overcame a cagey start to defeat Zaurs Sadihovs (4-13) over six. Hayes found his range in the second with crisp one-twos, and applied increasing pressure from then on. He looked for the knockout in the final session, but an experienced Sadihovs stayed out of trouble, forcing him to settle for a 60-54 score instead.

Debutant Dan Neville won a battle of the body shots against Ricky Leach (2-13-1) over four. Leach, reddened around the ribs from the first round, rallied enough to take the third round on my card but lost the fight itself, which was awarded to the busier Neville by a score of 40-36 (39-37 for me).

David Pagan (3-1) endured a testy affair against Sonny Whiting (5-13-2) who applied moments of sleek pressure in their four rounder. Eventually Pagan’s work rate (and a point deduction against Whiting) saw him walk away a 39-37 winner, with good body shots swinging the tide in his favour.

Ibz Mercan used every opportunity to win his debut against Merdjidin Yuseinov (7-18-2), some of which were slightly unsavoury, with some rabbit punching and hitting on the break detracting from an otherwise solid performance. He had his man down in the second and winded in the fourth to take the contest 40-35. More experience will see him end contests like this before the final bell.

Zack Davies (7-1), trained by experienced trainer Gary Lockett, blitzed the capable Ismail Anwar (6-10) in two rounds in an excellent showing. Anwar was busy but had no answer to Davies’ natural talent, and was put in trouble in the second after an overhand right staggered him into the ropes. Davies let fly, and was pulled away after some big shots went unanswered 1 minute into the round.

Charlie Wynn (2-0) overcame experienced Matthew Ashmole (1-30-1), with an excellent jab and shot selection proving much of the difference. He dictated matters well until the final round, when a brief skirmish looked as though it opened a small cut over the right eye. He took the contest 39-37, although I gave him every session with a score of 40-36.

This was a slightly bizarre evening. The running order had mis-printed various details (the correct opponent, number of rounds, the order of the contests etc… perhaps down to some difficult last-minute matchmaking), and the DJ was having a nightmare, with entrance music only introduced come the 6th bout of the evening only to vanish and re-appear again as it pleased. The boxing, however, was generally excellent. Hellraiser promoter Mickey Helliet threw his support behind the Pay-Per-View platform in this week’s edition of Boxing News, claiming that without it “…the smaller shows wouldn’t get the investment because the interest wouldn’t be there.” Well, this evening’s event should act as proof that the smaller shows can thrive on their own merit, because there was more than enough on offer here for everyone to enjoy.

Correction – Last week in my fight report here: https://www.britishboxers.co.uk/2017/02/dallas-downed-in-london-jones-wins-thriller-saward-and-khan-shine-in-debuts/ – Unable to get a clear view of the action, I missed the fact that Billy Underwood’s shoulder had come out in the final round of his four round debut, instead putting his struggles down to lack of fitness. Underwood, therefore, displayed real grit on top of a decent first showing.