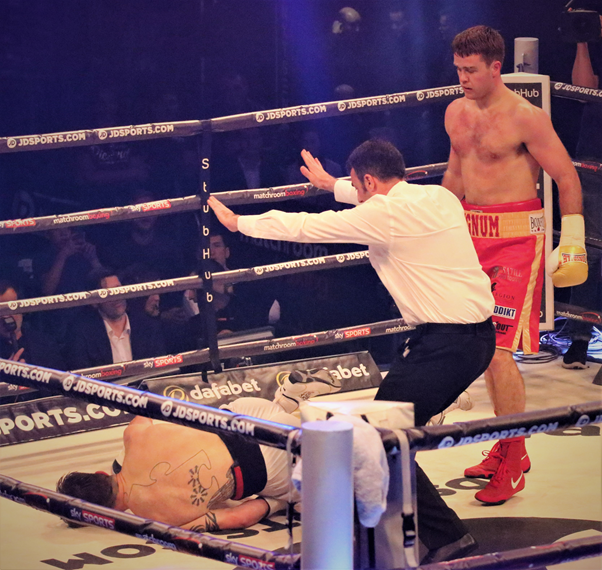 As you walk up to the entrance of York Hall, the building is steeped in history. Large stone steps and iron railings lead you into a foyer of warm wooden walls and you begin to hear the buzz of the crowd.

Walking into the arena, the atmosphere is electric and the punters are beginning to pack out to the rafters for what will be an amazing night. York Hall doesn’t present itself as the glamourous side of boxing, but that is what gives it it’s charm. The small venue with a capacity of 1200, fills up with spectators and with such an intimate venue, they can almost touch the fighters from the balcony.

Miles Gordon-Darby (2-0,0KOs) faced Jamie Ambler(12-67,3KOs) to fight four three minute rounds of a Cruiserweight competition. Ambler has many defeats on his record and only twelve wins in a long career, but has been in the ring with a few notable fighters and is the more experienced of the two. In a competitive first round, both fighters held their own and landed some good shots to their opposition. In the second we saw Ambler strike with some powerful shots which had Gordon-Darby’s nose start to redden up in an evenly fought round. In the third Miles upped the tempo a bit and Ambler seemed to be overpowered by his junior opponent’s fitness. Ambler placed a few rough tactics which were pulled up on by the referee. In the fourth Gordon-Darby was still struggling to control Ambler, whose awkward style had him working hard to show his talents in the early stages of his career. The judges’ final decision of 39-38 points was in favour of Miles Gordon-Darby. He spoke to Sky Sports after the fight and described it as “a perfect learning curve” from his previous experience and career in MMA.

Danny Dignum(2-0,2KOs) met Iain Jackson (5-35,11KOs) for a four three-minute round Middleweight contest. In the first round Dignum made his powerful presence known with his aggressive southpaw stance and in the last minute, a swift combination of shots wobbled Jackson having him narrowly make it out of the first. Dignum was calm coming into the second and a clean right hand in the second minute put Jackson on the floor. He barely caught his breath through the count before Dignum finished the fight with a clean left hand which left Jackson on the canvas. Dignum showed his concern for his opponent before celebrating his win, but prevailed in this Middleweight contest.

Jake Ball(8-1,7KOs) returned to the ring to fight Olegs Fedotovs (21-30, 15 KOs) after a brutal defeat at Wembley Arena last November. His loss to J J McDonagh ended in a knockout and he has since been building himself back up to make his name in boxing at this early stage in his career.

Jake “The Blade” looked relaxed as he walked into the ring to face his opponent for a Light-Heavyweight contest on Friday night. In the first round a flurry from Ball, saw Fedotovs finding it difficult to maintain the pace and the referee stepped in to stop the fight at 58 seconds. A super-fast victory from Jake Ball means that he is back on his feet and back to his winning ways.

Felix Cash(5-0,3KOs) stepped up to the ring to face opponent Jay Byrne(4-1,1KO) for a 6 round Middleweight contest, which would put both fighters unbeaten record on the line. In the first round Cash’s strong left was proving difficult for Byrne as his right eye was already starting to redden up. In the second Byrne landed some clean shots but they didn’t seem to faze Cash. In the third Byrne showed true determination as Cash kept walking him down into optimal positions for his shots.  Cash seemed to be the sharper fighter of the two and it was hard to see how Byrne could pull it back at that point. Byrne continued to land clear shots in the fourth, but it didn’t do anything to knock Cash back.  The fifth saw Byrne beckoning Cash in and denying his opponents power with a shake of the head. There is no doubt that he has heart and determination through the onslaught from Felix. In the last round, Cash leads the way with his shots but all credit due to for the Irishman Byrne for upholding his stamina through to the final bell. With a final result of 60-54 in favour of Felix Cash, the man from Wokingham is set to prove his worth in his professional career and shake of his amateur image.

Paul Hyland Jr (15-0,5 KOs) was next up to fight his opponent Peter Cope(14-4,0KOs) for eight three minute rounds of a Lightweight competition. The first round saw the fighters exchange good body shots, but Hyland seemed the more relaxed of the two. In the second Hyland found his comfort in the middle of the ring, being able to dominate with his combinations, whereas Cope did well when in close, sneaking a clean uppercut in. In the third, Hyland was making sloppy mistakes giving Cope the opportunity to make cleaner shots. The fourth seemed to be in Cope’s favour – he was learning as the fight progressed and Hyland continued to make mistakes, concentrating more on walking his opponent down. Hyland was struggling to adapt to Cope’s awkward Southpaw stance in the first half of the fight, but in the fifth he tried to figure out how to avoid Cope’s right hand. In the first minute of the sixth, Hyland landed a big right hand which led into a six-punch combination. Cope’s sharper shots kept him in the running for this round, whereas Hyland had upped his work rate. Cope slowed down in the beginning of the seventh and Hyland began to take back dominance of the fight. In the eighth Hyland seemed more at ease and comfortable with Cope’s technique and he continued to dominate in the round. With a very close run fight throughout, Paul Hyland Jr was victorious when it was scored 78-76 points in his favour. With mutual respect from both fighters, they seemed keen to meet again later in the year for a rematch.

Isaac Chamberlain (7-0,2KO) faced Imantas Davidaitis (5-20,4KOs) for six rounds of a Cruiserweight competition. Neither of the fighters rushed in to the first round. Davidaitas towered awkwardly over Chamberlain who needed to entice “The Giant” into a brawl to get close up and land those cleaner shots. In the second round Davidaitis looked to fall into trouble after a hard punch from Chamberlain that snapped his head back and was followed by a succession of clean body shots. He obviously hadn’t quite recovered after the last round as a swift body shot combination from Chamberlain had the Giant fall to his knees. He just about got to his feet within the ten second count before Chamberlain finished him off with a flurry of shots with very little response from Davidaitis. The referee stepped in to stop in the second minute of the third and Isaac Chamberlain kept his unbeaten record with his victory.

“The Avalanche” Alan Higgins(12-1,6KOs) stepped into the ring to take on his challenger “The Spider” Craig Richards(8-0,3KOs) for the Southern area Super-Middleweight Championship in a ten round fight. Richards showed he had an advantage with his longer reach in the first, however Higgins was successful with combinations when he got close to Richards in the second. In the third Richards flicked out sharp right jabs but Higgins responded by pushing Richards back to the ropes to land those powerful body shots. Higgins upped his work rate in the fourth but in the fifth “The Spider” started to mock Higgins and stood square footed to show his indifference. Richards upped the pace in the sixth with a hard right landing beautifully, but Higgins just kept pressing forward with those numerous body combinations. The seventh looked quite evenly scored however Richards may have just nicked it with his counter attacks on Higgins’ shots. Richards continued to walk Higgins down in the eighth but both fighters seemed comfortable with the pace and the continuous back and forth made for another close round. Higgins dominated the ninth with harder and faster combinations, but Richards wasn’t giving up. With such an evenly fought bout, it all came down to the last round. Both fighters continued with the same pace and tactics that they had shown throughout, making it such a difficult fight to judge. In the end victory went to Craig Richards with the points being 97-95 and he took home the Southern Area title.

Reece Bellotti(9-0,8KOs) headlined the night, meeting his opponent Dai Davies(14-25,2KOs) in the ring for a ten-round eliminator for the British Featherweight Championship.

In the first round, Bellotti showed his youth and freshness in his speed and athleticism, but Davies experience saw him keep his cool and take his time. In the second the “Bomber” Bellotti continued to walk his senior opponent down relentlessly and in the second minute he unleashed a burst of accurate shots. Was Davies going to be able to keep up with this pace? Bellotti continued to push Davies around the ring and in end of the last minute, knocked down Davies with a heavy shot, which had the referee call it in. After Davies had recovered in his corner, both fighters met for an embrace of respect.

The “Bomber” continues his career as an undefeated fighter and we can expect a promising future for him. Bellotti looks to gain more experience from future fights, like he did with Dai Davies on Friday and hopes for more titles in the years to come.