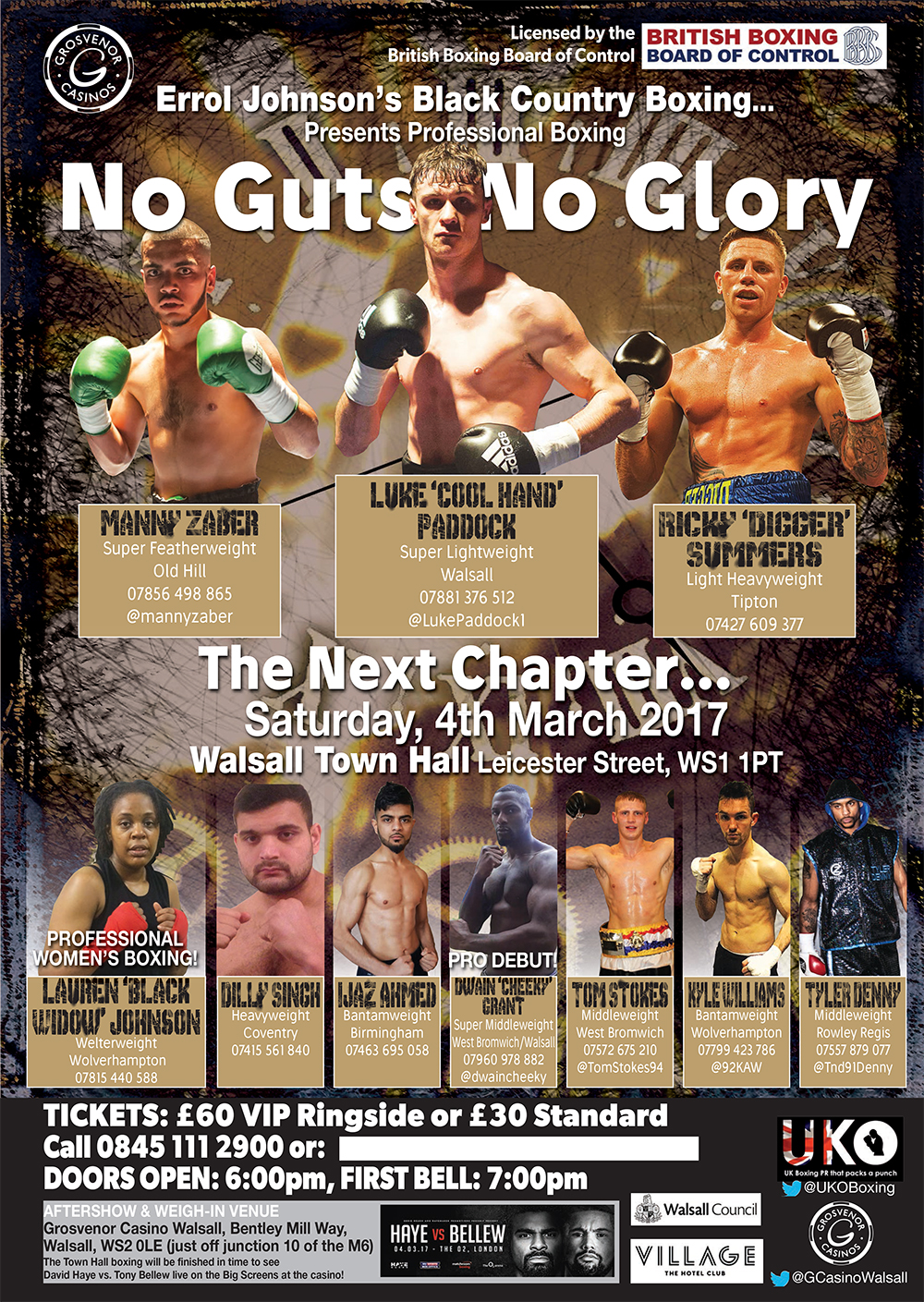 The card for BCB’s ‘No Guts, No Glory’ show, sponsored by Grosvenor Casino Walsall, at Walsall Town Hall on Saturday has been finalised.

Walsall’s Golden Boy, Luke Paddock (15-2), headlines in an six-round contest. Paddock is back on the title trail in 2017 and has his eyes on Midlands, and English, honours. Standing in his way this weekend is Poland’s Lukasz Janik. The 28 year-old has been in with the likes of Robbie Davis Jr and Sam O’Maison and should give Paddock the rounds he needs to blow off the cobwebs in what will be his first fight of 2017.

Wolverhampton bantamweight, Kyle Williams, steps in with Yorkshire‘s Craig Derbyshire looking to build on his perfect start to life in the paid ranks.

Light heavyweight Summers was slated to take on Frank Buglioni this weekend but an injury to the Wise Guy means that his British Title clash has been postponed. Having not fought since November, ‘Digger’ will step in with Lithuania’s 98-fight veteran, Remigijus Ziausys, as he warms up for his Lord Lonsdale shot later this year.

Old Hill super featherweight, Manny Zaber (8-1), will be looking to bounce back from a first professional defeat last time out when he faces Kent’s Ricky Leach.

The weigh-in takes place at Grosvenor Casino Walsall at 1.00pm on Friday. All over 18’s welcome.

Tickets for No Guts No Glory on Saturday, 4th March are priced at £30 for standard unreserved seating or £60 VIP Ringside and are available by calling 0845 111 2900. Doors open at 6.00pm, first bell 7.00pm. The aftershow also takes place at Grosvenor Casino Walsall (Bentley Mill Way, Walsall, WS2 0LE – just off junction 10 of the M6). Grosvenor Casino Walsall have linked up with local taxi firm, Yellow Taxi’s, to supply a number of free taxi’s to take guests from the Town Hall to the casino post-fight where the show will be finished in time to catch the main event from the O2 as David Haye and Tony Bellew clash live on Sky Sports Box Office.