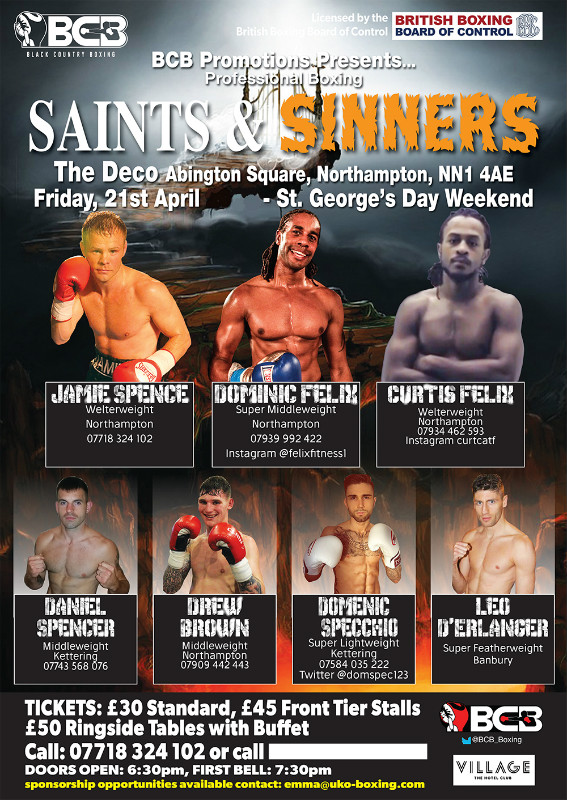 Almost a year since their co-promotion with Hatton Boxing, BCB Promotions return to Northampton next month.

A host of Northampton-based boxers will be in action at The Deco Theatre on Friday, 21st April.

The Felix Brothers – Dominic and Curtis – are both in action.

Elder brother Dominic Felix turns over after a stint in the Queensbury Boxing League whilst Curtis Felix will be looking to make it a hat-trick of victories since turning professional last year.

Northampton welterweight, Jamie Spence (13-4), also features. The 32 year-old beat Daniel Bazo at The Deco in his last outing and will be looking for a similar result this time around.

Fellow Northampton fighter, Drew Brown (4-0), is also in action as looks to extend his unbeaten start to life in the paid ranks.

Kettering middleweight, Daniel Spencer (1-0) will be hoping to avenge his debut loss to Vinny Atkins when he appears on the show alongside Banbury super featherweight, Leo D’Erlanger. ‘The Lion’ (6-1-3) trains at the renowned Ingle Gym in Sheffield and will be looking to kick-start his career and challenge for national honours.

“We’re looking forward to returning to Northampton,” explained Promoter Errol Johnson. “BCB Promotions are expanding our operation and looking at different areas to work. We feel that, given the right exposure, this can become a real hot-bed for professional boxing.”