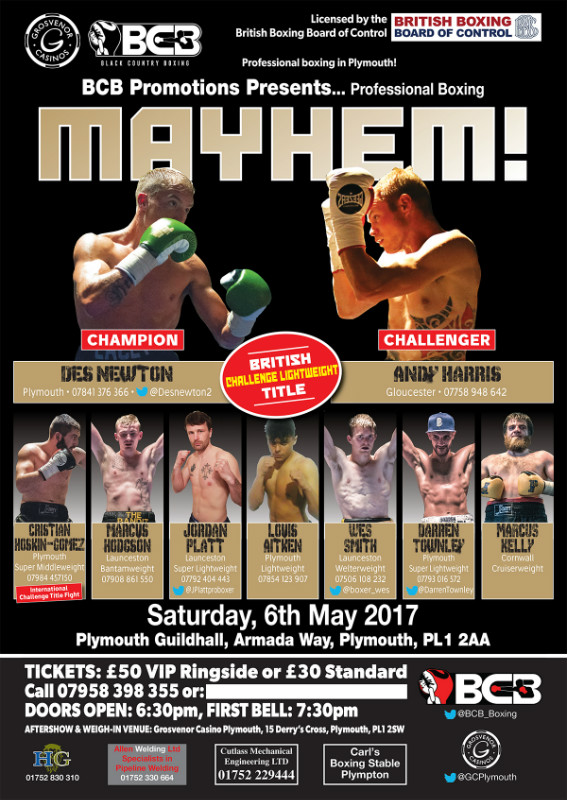 Globetrotter Aitken Set To Keep Feet On The Ground

Globetrotter Louis Aitken believes the time he spent living in the Far East and competing in South America will give him an advantage over as he switches disciplines from kickboxing to boxing.

The 21-year-old represented England kickboxing in Brazil and was given sponsorship which allowed him to spend eight months in Thailand training and fighting in his previous sport.

Aitken has now decided to put kickboxing on hold after discovering a passion for pugilism and is determined to keep his feet firmly on the ground when he turns over on BCB Promotions’ ‘Mayhem’ show, at the Plymouth Guildhall on Saturday, 6th May, sponsored by Grosvenor Casino Plymouth.

“I represented England at the amateur Championships in Brazil and it was brilliant.” Aitken told bcbpromotions.com. “After the championships the owner of the club offered to sponsor me and said they would send me out to Thailand. You train and compete out there. I was in Thailand for about eight months training and fighting. It was a crazy experience!

“Quite a lot of British Thai boxers do it. I was lucky to be all expenses paid, but it was probably one of the most challenging things I have done. I had no money out there and training was pretty much all I had. It was a big toughening up experience and I think it will be something that I have above other boxers at my level. It teaches a lot of heart and you get a lot of grit from it and it will help me with the pressure in future fights.

“I only got into boxing because I wanted to bring some new coaching on board that would supplement the kickboxing because a few things changed in my training camp. But then I discovered that I was good at it and the coaches I had put me in sparring against white collar guys and guys that were about to turn over pro and I impressed. So opportunities started to present themselves and I decided to follow that route and try something different.

“Everybody asks me am I tempted to kick someone, and the answer to that is no not at all. It has been quite smooth to adapt and it has been really fun. It is a completely different challenge and a different rule set and a different way of fighting. If you have good coaching and good people behind you then it makes the transition much easier. Hopefully I can go on now and win some fights.”

The lightweight has been forced to wait to make his debut after an issue with his medical but now he has been given the green light to compete and he is hoping his debut in his hometown next month will be the start of a journey that leads to, at the very least, the Southern Area Title.

“I have been training in boxing for about two years,” he added. “I had a discrepancy on my medical a year ago, just before I was set to make my debut. I was pulled out just before the fight and we had sold over 100 tickets so it was frustrating. I had a treatment done to my eyes when I was about 17 and basically that came up on my medical and the British Boxing Board of Control wanted to know all about it. It took a long time for that to get sorted so it has kept me from getting in the ring. I am chomping at the bit now to fight and it did get me down at some points not being able to fight earlier because it is such a long lengthy process.

“I just want to go out and enjoy myself at the Guildhall and come away with a win. I want my supporters to enjoy themselves as well and I want to create a real atmosphere and put on a strong performance. The plan for me is to build the tests up as we go because this is a completely new challenge. We will take it one step at a time and the aim is to work towards a Southern Area title. It could take eight fights or it could take 12, we don’t know, so it could be a couple of years down the line. But the Southern Area Title is the main target and then I can progress through the rankings after that.”

The weigh-in and Aftershow Party (over 18’s only) take place at Grosvenor Casino Plymouth, Derry’s Cross, Plymouth, PL1 2SW (just a two-minute walk from the Guildhall).