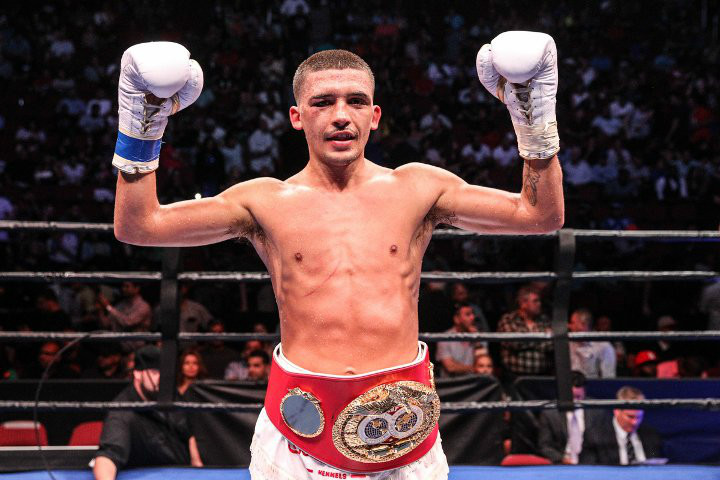 The potentially cracking prospect of seeing Carl Frampton and Lee Selby square off could be nearing reality, after a ruling by the WBA squashed any immediate plans Frampton had to fight Leo Santa Cruz again this summer.

Frampton (23-1, 13 KOs) had beaten Mexican Santa Cruz (33-1-1, 18 KO) to claim the WBA belt in New York last year but lost the rematch in Las Vegas, January gone. It seemed more than likely that the pair would fight a rubber match after scoring one-a-piece, but if a trilogy does happen, it will now have to wait.

The World Boxing Association have ordered Santa Cruz to defend his featherweight title against Abner Mares in what will be a rematch of their 2015 ‘fight of the year’ candidate, when Cruz narrowly outpointed Mares to claim the belt he eventually lost to Belfast’s Frampton.

Frampton, 30, said he was set to announce his next opponent in the next few weeks and has indicated that his next fight will take place in either late July or early August, possibly at Windsor Park, the home of the Northern Ireland football team.

Frampton and current IBF world featherweight champion Selby have been on course to clash ever since Frampton made the step up to featherweight to become a two weight world champion. The Northern Irishman has already welcomed the fight, as has Selby.

“Selby is great fighter, tall, massive for the weight, nice guy, someone I respect a lot.” Frampton has stated about his UK rival. “I think that fight has more appeal to me than the rest because he’s a Welshman. He would come to Belfast to fight, too.”

Selby, is currently waiting on the IBF to find a resolution to his mandatory challenger situation and waiting to see if a resolution can be reached, that clears the way for him to defend against Frampton this summer. He was scheduled to make a mandatory defence against Johnny Barros on the last Frampton-Cruz fight in Vegas, but the challenger failed a pre-fight medical exam and the fight was cancelled. Selby has since boxed in a non-title fight earlier this month against Spain’s Antoni Gago.

“I’ve been over to Belfast before. I defended my British and Commonwealth titles there and I would be more than happy to do it again.” said a confident Selby on a potential Frampton fight, and added when asked how the fight would go? “I would have to go with myself winning. I don’t know by what method, but I’ll find a way to win.”

The Frampton-Selby matchup was recently given more fuel and hope, when Selby’s manager Chris Sanigar said it “definitely happen” this year.

The Bristol-based coach and manager Sanigar told ‘The Irish News’ recently, that, while Selby would prefer the fight in Cardiff, he will travel to Belfast “If the package was right”. and he predicts that a Frampton-Selby rumble would be British Fight of the Year for 2017.

“I think Lee Selby versus Carl Frampton will definitely happen in 2017,” he added.

“I believe Lee Selby has the tools to win and I think, when we have the fight, there’ll be respect from both boxers and it’ll be a pleasant change not to have any bad-mouthing.

“It will be a fight, a proper fight between two tough, respectful men.

“There won’t be any throwing tables up or swearing. It will be respectful and I would think it will be the Fight of 2017 in British boxing between two top sportsman.

“After that he’ll be ready to box Carl Frampton, Leo Santa Cruz or Abner Mares,” he added.

“Those are the three that we’ve been promised. Carl Frampton is our preference and Al Haymon (US promoter) knows that, so Team Frampton and Team Selby have to get together.

“We work very closely with Barry McGuigan and the boys and we have a show in Cardiff on March 11 (Cyclone fighter Conrad Cummings features as chief support) so we’re talking every day and we’ll get March 4 out of the way and then hopefully we can start talking about Frampton versus Selby.

“There is a sticking point about Belfast or Cardiff but I’m sure we can get over it. We would prefer to box in Cardiff and the McGuigans want Windsor Park but we have to work that out and see how the finances can compensate.

“If the package was right Lee Selby would box in Timbuktu.”

Selby beat Martin Lindsay on the undercard of Frampton’s first fight with Kiko Martinez at the Odyssey Arena in 2013. Sanigar has also done business in Belfast previously and has no problem making the fight there.

“We’ve got the greatest respect for the McGuigans and also for the Belfast boxing public,” he said.

“I put on a couple of shows in Belfast back in the 1990s at The Ulster Hall with Glen and Owen McMahon. We had Eamon McAuley on and a few of the boys and we had a good time in Belfast.”

Lets hope this fight can happen, what a potential classic it could be.

“They were given a 30 [day] negotiating period, and should they not reach an agreement, the WBA will summon a purse bid.

The Mexicans met before in 2015 in a bout considered one of the best fights of the year, which ended in a majority decision to Santa Cruz, who became the WBA featherweight super champion.