Mum’s emotional tribute to her son Ed Bilbey: “Boxing defined him and was his life, his passion.” 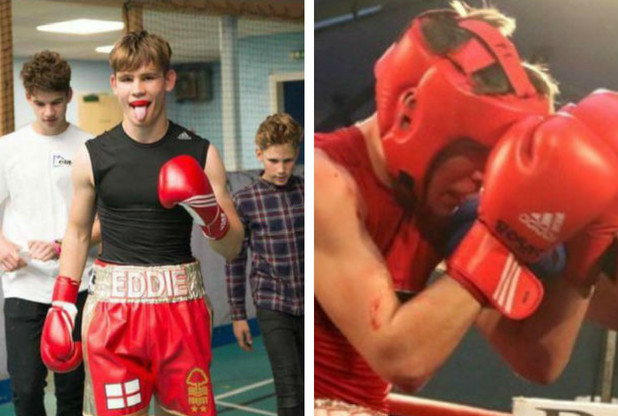 Last month we received the tragic news that young amateur boxer Ed Bilbey died following a bout. All at British Boxers were stunned by the news and send our deepest sympathy to the family.

The mum of a tragic 17-year-old boxer who died after collapsing in the ring has paid tribute to her “beautiful” and “handsome” son.

Ed Bilbey, of Ripley, died in hospital shortly after competing in an amateur match at the Post Mill Centre in South Normanton on March 24.

He was given CPR by an on-site doctor before paramedics arrived, but he was pronounced dead on arrival at Kingsmill Hospital in Sutton-in-Ashfield at just after 10.15pm.

She said: “My Eddie boy, my champ. He was more than just a boxer, he was a beautiful, clever, handsome, caring, honest, respectful and truly pure soul with a heart of gold and a kind word and time for everyone.

“He was my confidante, my rock, my very best friend and my shopping partner. He was more than just a brother to Henry, George and Charlie, he was like a dad to them. Always looking out for them, helping with homework (because he was the cleverest) spending all his money on them, especially at Christmas time, making sure they had plenty to open on Christmas Day.

“Henry Bilbey was his best mate and partner in crime at college. I think his happiest days were spent at UCB with Henry and all his mates on the course, mainly as they shared the same mind-set, goals and determination to make something of themselves. He could relate to them as they too gave up the usual life of a 17-year-old to concentrate on fulfilling their dreams.”

She said Ed would be out running, pounding the streets with the headphones in any time of the day, with one dream in mind, “to be somebody in boxing, the best that he could possibly be – a world champion one day, an amateur boxer for England now if he worked hard”.

She said boxing “defined him” and was “his life, his passion”.

She added: “No one could ever fault his work ethics and that relentless determination with one goal in his heart. His phone screen saver was a picture of that belt, just to remind him why he was getting up in a morning and sacrificing all that he did.

“He loved sport, any sport, but his other passion was Nottingham Forest where he held a season ticket for many years with his very best friend Jamie Wood. He’d just started to go out with his lovely friends, who he’d known since school and was looking forward to his first lads’ holiday with them.

Read more of this story here, courtesy of the Derby Telegraph

England Boxing, the national governing body of the sport in England, has set up a Crowdfunding page to raise cash for the launch of the Edward Bilbey Foundation.

A spokesman said all funds raised will be given to the boxer’s family who will set up the trust to “honour his memory for years to come”.

England Boxing’s head of operations, David Thorley, said: “People throughout grassroots boxing have been shocked and saddened by this terrible event and, as the governing body for the sport in England, we felt it was important to recognise the family’s loss and do something to try to help them through this extremely difficult period.

“We know that lots of people across the sport have been affected by this terrible event and decided to set up the foundation as a means for people throughout boxing to express their support for Edward’s family and demonstrate that they are thinking of them at this time.”

The body, which launched an investigation into the incident alongside Derbyshire Police, advised anyone affected by Mr Bilbey’s death to seek professional or specialist advice.

Meanwhile, a separate Justgiving page has smashed the £3,000 mark – dwarfing its initial £1,000 target in less than a week.

Chesterfield Coroners’ Court said a post-mortem examination took place on Wednesday, but a cause of death is not likely to be determined until next month.

Scores of people took to social media to pay tribute to the talented sportsman. Nottingham Forest Football Club sent its “sincere condolences to the family and friends of Eddie”, who was a fan of the club.