Be Looking Good, Jazza. All the way back to Coney 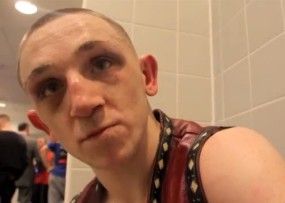 On May 13th, the instantly recognisable Solsbury Hill will smother a congested Leeds Arena and out will come Liverpool’s James Dickens sporting a genuine smile and a Warriors waistcoat. The chocolate brown leather garment, an ode to one of Dickens’ favourite childhood movies, has accompanied the Liverpool man on the vast majority of his 24 ringwalks and so far it has preceded victories on all bar two occasions, the exceptions being setbacks against Sheffield’s Kid Galahad and Cuban wizard, Guillermo Rigondeaux.

Always brave, and especially so in defeat, Dickens would not find himself out of place venturing with Cleon and his designated foot soldiers to Van Cortlandt Park in 1979 to hear the wisdom of Cyrus or overseeing the hellacious subway journey back to Coney Island. That cinematic voyage of self-discovery made cult icons of fictional Warriors. Dickens is a real-life one.

If we are to compare Dickens’ career to the screenplay that most resonates with him (and we are), then let’s take it back to the very beginning. The well-documented hardship that choked northern England, most notably Merseyside, in the 1980s, could still be felt a decade later when Dickens was nothing more than a small boy bursting with energy and ideas. The boxing ring, as it had proved for legions before him, became his salvation, “a whole lotta magic” boasting the same hypnotic glow that members of The Warriors saw in Cyrus.

The Father of The Riffs, New York City’s premier gang, Cyrus was an innovator. He declared a truce one showery summer’s night and summoned nine members from each street crew to The Bronx so he could share his grand vision of bringing together every creature of the night and overturning the police rule that prevailed. Not everyone agreed and Cyrus fell victim to some accurate shooting by The Rogues, but with the blame placed at The Warriors’ door, their return to Coney Island on the darkest of New York nights seemed a doomed crusade.

Dickens, like Cyrus, dreamed big, and thankfully he got to live some of the scenarios that he envisaged while resting at night following sessions at tough inner-city Liverpool gyms like Toxteth’s Golden Gloves or Salisbury ABC — the latter lies in the shadow of the Royal Liverpool Hospital where prostitutes and drug addicts are frequently found in the not-so-welcoming reception area.

‘The loss to Galahad was a shattering blow to Dickens and one that led to Glyn Leach, Boxing Monthly’s late, iconic editor sending me an email saying he feared for Dickens’ wellbeing due to his entire existence being predicated upon the craft he adores.’

At 16, freckle of face and ready to rumble, Dickens could have pursued Olympic honours but was insistent his fate lay in the professional ring. He was a kid who knew too much and despite pleas to continue competing in the vest, Dickens stuck to his word and turned professional with Paul Stevenson after winning an ABA title for ‘The Solly’ in 2010.

Dickens received significant fanfare almost immediately and his reputation amongst those in the sport ensured his was a valuable scalp on his rise through the domestic rankings. Like Swan and company dodging the attacks of The Turnbull ACs and The Orphans, Dickens defended himself against spirited efforts from James Ancliff and Jon Fernandes. His name was often mentioned in similar fashion to those of then-fellow Super bantams Scott Quigg and Carl Frampton, but those opinions were mostly tempered when he was halted by Galahad whilst ahead on the scorecards. It was a shattering blow to Dickens and one that led to Glyn Leach, Boxing Monthly’s late, iconic editor sending me an email saying he feared for Dickens’ wellbeing due to his entire existence being predicated upon the craft he adores.

A low point, that part in the plot where our hero endures a torrid moment that ultimately shapes his comeback, and Dickens rebounded with appropriately heroic brilliance. Unlike Fox, who was tossed into the path of an oncoming train, or Ajax, who’s thirst for a sexual encounter led him into the waiting handcuffs of an undercover detective, Dickens, like Swan, adhered to the strategy and slogged forward with rewards still in sight. The British title at arrived with a points verdict over Josh Wale and Jazza retained the strap with another well-earned win over Mrtin Ward, the older brother of his upcoming opponent Thomas Ward, and then, one tune-up scrap later, came Rigondeaux and the chance for Jazza to be bigger than any plans Cyrus had for the city.

Thomas Stalker once told me a story about asking a group of boxers if they would quit the sport if they were offered a £5m lump sum. Every fighter present answered in the affirmative apart from one. It was Dickens who maintained that he was keen to see what he could become and, against the decorated Cuban, he had that opportunity. Unfortunately, his quest for greatness was cut short as he sustained a broken jaw early in the fight, prompting Stevenson to withdraw his charge despite vocal appeals from Dickens who was adamant he could continue.

With that injury behind him and with his body being fully healed, Dickens is nowhere near finished what has already been a storied career. If Leach were still with us, he may have found his fears somewhat assuaged by the fact Dickens is now a fantastic father of three and no longer focused solely on boxing. One could assume, then, that Dickens’ work is complete and whatever the sport — one he has dedicated himself to for a large portion of his life — throws at him now can be considered a bonus; but I don’t buy that.

Dickens, once upon a time, wanted to be the best for himself; it was a selfish obsession that I’ve never seen in another fighter before or since. With a family urging him on, instilling even greater purpose, this warped dedication is likely to grow more focused as he aims for the leading names of the sport once more. When Swan guides his troops back to Coney Island, a fixed stare on the Atlantic Ocean reminds him of home and of safety. It’s a warm tranquility that I believe Dickens feels every single time he steps into the ring.