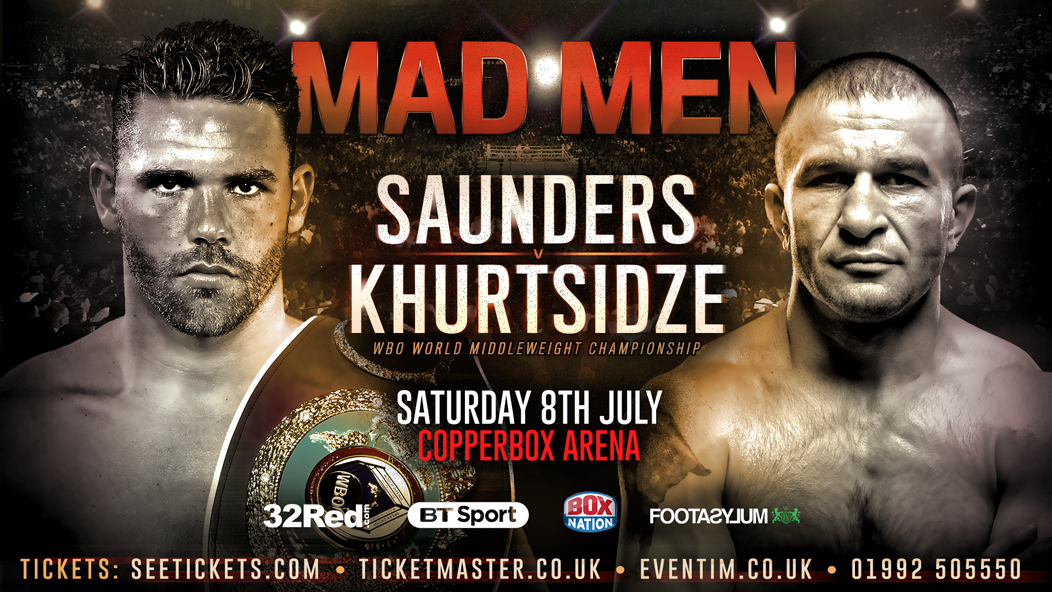 Hatfield’s Saunders (24-0, 12 KOs) defeated Irish hero Andy Lee to take the WBO strap in a close and absorbing fight back in December 2015 that saw the undefeated star floor the former Champion twice in the third round and go on to claim a majority decision from the judges.

A series of injuries led to a frustrating 2016 for Saunders, but he eventually defended his belt last December against Artur Akavov in Glasgow. Saunders was not at his best, but outpointed the game Russian.

Georgia’s Khurtsidze (33-2-2, 22 KOs) carved his route to the title with a knockout win over formerly-unbeaten Midlander Tommy Langford in April, ending the fight with a Mike Tyson-esque brutal left hook. He is an avoided man in the division and will fancy his chances of earning another victory on these shores.

A classic battle of boxer versus puncher, skill versus power awaits. Both fighters have eccentric personalities inside and outside of the ring with the Champion calling his shorter opponent a “puffed up Danny De Vito,” while Khurtsidze’s camp have promised to ‘beat down’ Billy Joe.

“No disrespect to him but I will show you what he is when I fight him,” said Saunders. “All he is to me is a puffed-up Danny De Vito coming forward throwing wild punches. It takes more than just power if you want to get anywhere near me.

“He will never beat me and I will make him look stupid on July 8th. He does possess knockout power but I’m going to make sure I’m in the shape of my life and give him the toughest night he has ever had.”

“I’m coming to the UK for another knockout,” said Khurtsidze. “I took Tommy Langford’s unbeaten record and I’m coming for Billy Joe’s; and his belt! I have waited patiently for my World Title show and I won’t waste it. Billy Joe didn’t want to fight me last year and he would be wise to avoid me again; I love to fight!”

Saunders’ promoter Frank Warren said: “Khurtsidze showed against Tommy Langford that he presents a clear and present threat to anyone in the Middleweight division. He charges forward like a bull and holds lethal power in both hands.

“I believe that a clever and slippery customer like Bill is far too stealthy to get himself cornered against Khurtsidze. He has one of the best chins in the Middleweight business and it will take something spectacular to beat him. This will be an intriguing fight.”