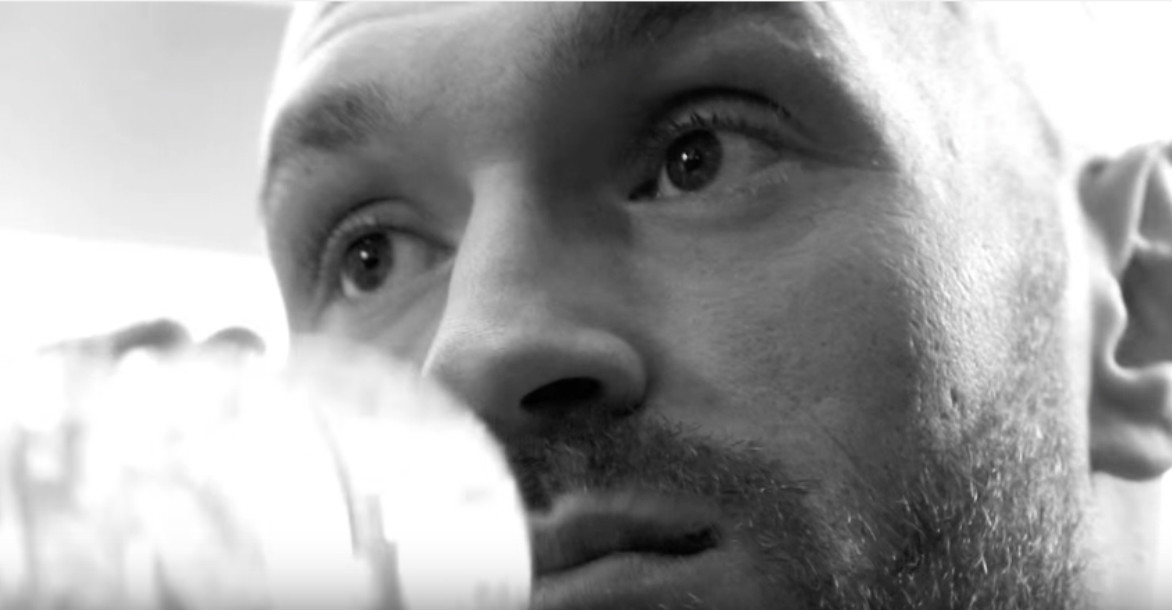 TYSON FURY is aiming to return in July then face Anthony Joshua in a mega-showdown in April next year at Wembley Stadium, where the latter recently got off the deck to stop Wladimir Klitschko and add the WBA Super belt to his IBF title. He swears that April 18 has already been pencilled by Joshua’s promoter Eddie Hearn, for what would be British boxing’s biggest ever commercial success, until I inform him that it is a Wednesday. “Ah, Eddie is a tit,” the former world heavyweight champion faux laments.

The date may be a ruse but, whisper it quietly, the ambition may well be real. Fury, who is aiming to shed weight and return to fighting shape with friend Billy Joe Saunders out in Marbella – after taking the ‘no carbs before Marbs’ rule and apparently eating it whole – speaks to me on the telephone as the WBO middleweight king, who Tyson initially claims is his new trainer, launches catcalls from the periphery, which includes enquiring about my wedding which, I inform him, never existed beyond his vivid and disturbing imagination – Saunders probably assumes I was jilted.

The super-heavyweight had been promising me an interview for at least a year, while, for some weird reason, I was keen to see a Fury story that wasn’t based on a social media post; I’m traditional like that. Fury claims to weigh around 350lbs after dropping 20lbs thus far in the Spanish sunshine, where he is holed up, working out of the renowned MTK Gym. He has long fancied the Joshua fight, but the Londoner’s uneven, albeit ultimately triumphant, display against Klitschko has reaffirmed the belief that he can rule again.

“I don’t think this layoff will affect me,” Fury, inactive since his own superb, though less eventful victory over Wladimir in November 2015, states. “Wladimir is 41, was out for 17 months and it didn’t affect him, did it? He almost beat a big bodybuilder.

“I thought Joshua was getting knocked out in the fifth round, I was almost crying, I thought he was gonna cost me 20 or 30 million quid,” added Fury, who watched the record-breaking bout from Marbella. “I would have dropped a cannon of water on him to wake him up. Wladimir was trying to box cautiously, as he usually is, and he ran out of steam. He’s 41, it’s a young man’s game, if Klitscho wasn’t 41 he’d definitely beat him. A win’s a win, but 100 per cent Wladimir would have beat him. My win over him was a lot better, a better boxing display. He never hit me, but he hit AJ with a million punches and nearly knocked him out. He definitely did expose him. I hope [promoter] Eddie Hearn protects Joshua, because the first decent man he fights who’s not 41 beats him. Deontay Wilder, Joseph Parker, any one of these bums would beat him.”

Upbeat and mischievous, Fury is speaking just three days before a hearing with UKAD that could have a pivotal affect upon his future. While the regulator have lifted the provisional anti-doping suspension they handed down to him last June, Tyson will not get his British Boxing Board of Control license back until the case against him has been settled. Fury does not see either body as obstacles in his path.

“I’ll make them both offers they can’t refuse,” he jokes (probably) before said proposition rapidly evolves into an indecent proposal I’m opting not to repeat. Saunders, meanwhile, has switched to FaceTiming an unidentified lady whose welfare I am immediately concerned for. “I’m out here for the foreseeable future, running, doing circuits, padwork, sparring. I’ll be back on the July 8 Copper Box show headlined by Billy Joe Saunders against Danny DeVito [Avtandil Khurtsidze, presumably]. I’ll have a few comeback fights, two or three, while I’m waiting for Joshua. There’s no money in anybody else, I want ‘Mr Muscles’. “I can be the best Tyson Fury again, it didn’t slip away, I just couldn’t be bothered no more, it was s*** and I didn’t value it, but now there’s £30m involved. I was a shadow of my former glory but now I’m on my way back. With me and Joshua, one looks the part, one is the part.”

“My win over [Klitschko] was a lot better, a better boxing display. He never hit me, but he hit AJ with a million punches and nearly knocked him out. He definitely did expose him. I hope [promoter] Eddie Hearn protects Joshua, because the first decent man he fights who’s not 41 beats him. Deontay Wilder, Joseph Parker, any one of these bums would beat him.” —Tyson Fury

Our connection – telephonic rather than emotional ­– is abruptly severed but it would not be the last word from Fury this night. I am assailed minutes later by an audio message as he and Saunders, posing as equally unlikely 50 Cents, gave it their best Many Men, which delivers in gusto what it lacks in just about everything else. It’s a long road to redemption and, despite his confidence, I wouldn’t bet on it beginning in July, but there are, finally, thankfully, signs that Tyson Fury is coming back to the man who shocked the world. Like him or loathe him, that’s good news for a revitalised heavyweight division.