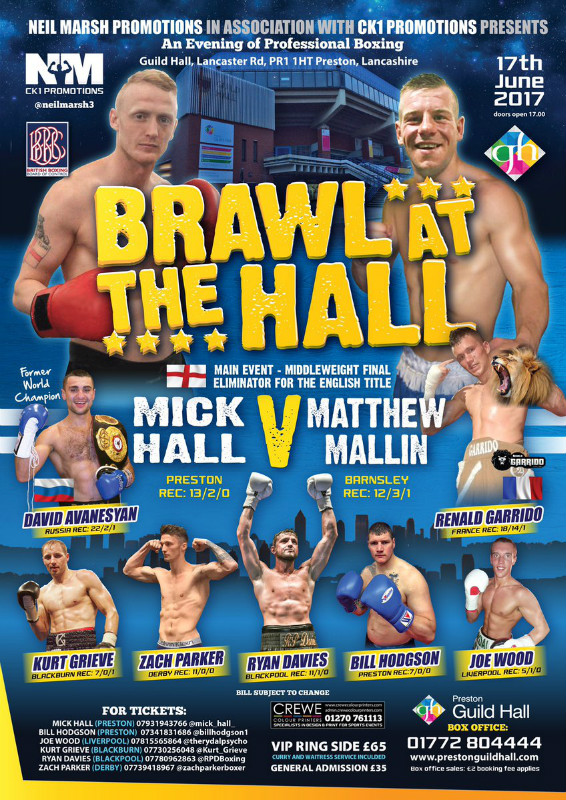 With seven victories from seven behind him already, Blackpool’s rising heavyweight star, ‘Big’ Bill Hodgson, is looking forward to the next stage of his career when he has his eighth contest in Preston on 17 June.

The likeable 34 year old has risen through the rankings since his debut a little over 18 months ago and believes he is no more than a handful of victories away from tackling the minor titles he hopes will be the springboard for shots at the domestic crown in 2018.

With a style that is developing more into a hard hitting box fighter rather than a puncher who relies solely on power alone, ‘Big’ Bill explains that the next stage of his career is crucial if he is to contest the belts he craves the most.

He said: “I’m conscious, coming into my eighth fight, that I’m now going past the sort of fighters you need to meet in the four-rounders in order to learn the game and become more suited to the professional side of the sport and am now looking at getting in with men – over six and eight rounds – who are a little bit better and can perhaps cause me a few problems. Make me think a little bit more.

“With this in mind I think I’ve got a lot more used to the pro side. I’m a lot more comfortable as a pro now. Definitely, and I think that’s evident in my life in general; I’m more focussed with my training now – I can spar 10 rounds easy and have been flying doing that in training over the past weeks – and, having lost a little bit of weight because of that, I’m also a lot faster. But hitting just as hard.

“I’m really looking forward to Preston and being busy the rest of the year. I’d love a shot at the British title and believe I’ll be good enough to do that next year.”

In his last contest Hodgson outpointed Tom Dallas over four rounds and says that that win, over a well-regarded fighter who has been in with the likes of David Price and Matt Skelton, was evidence of his growing maturity.

He said: “The Dallas fight was my first against a British fighter, my first against someone who was a bit more well-known and so there was a little bit of added pressure there – on me to perform. Again I think I handled it well though. My fight management is a lot better, I can pace a fight a lot better. That’s something we’ve been working on in training and people will be able to see that on 17 June when I’ll be having my first six-rounder. It’s an exciting time for me. I aim to keep busy, keep winning and win titles.”