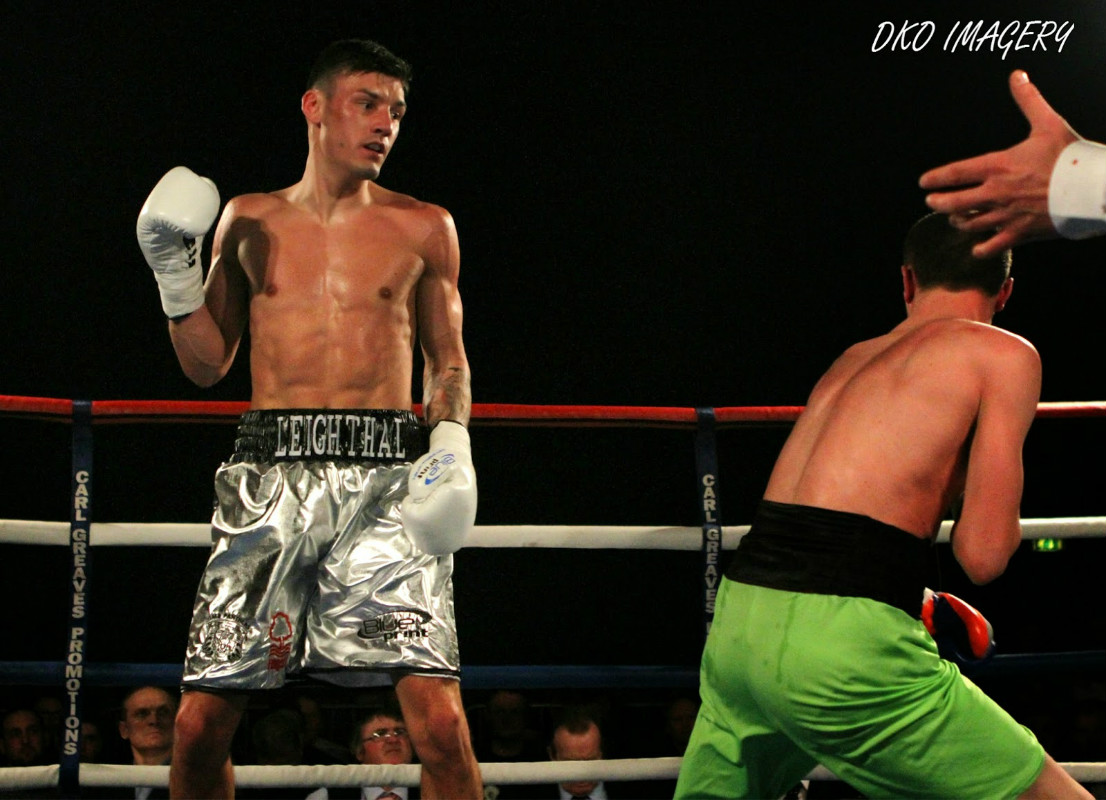 Leigh Wood back in action in Nottingham - pic: DKO Images.

Show Report from Nottingham: Leigh Wood back following a year and a half on the sidelines

Boxing returned to the banks on June 24th following its first show in February. A packed audience crammed into a hot Bingham Leisure Centre on this summers night to witness 6 bouts of boxing. This crowd was far bigger than the show in February had and just shows the progression of Boxing in Nottingham.

In his first outing since suffering his first loss as a professional to trial horse Alistair Warren, former kickboxer Chad Sugden got back to winning ways with a hard fought win over Latvian Raimonds Sniedze. Sugden boxed nicely at range, switching to make angles to land his shots. Sniedze was game through out but ultimately outboxed by the classy Sugden to send the large contingent of Sugden supporters’ home happy.

Lincoln cruiseweight Dan Cooper had a toe to toe battle with experienced Lithuanian Dmitri Kalinovski, Cooper boxed well in the first 2 rounds picking his shots nicely and pushing the game Kalinovski back. In round 3 Kalnovski pounced and landed some heavy shots. In round 4 he landed some combinations clean on Cooper who showed a great chin and resilience to stay on his feet to claim a fairly scored draw. It later emerged that Cooper had suffered a broken hand in round 1 which is a recurring injury and this makes the performance along with result more impressive in hindsight.

Omari ‘the preying mantice Grant is a well-known grime artist. Here he made his pro debut against seasoned journeyman Ibrar Riyaz. Grant initially looked nervous before settling into his rhythm boxing behind a neat and tidy jab winning unanimously on points.

Frank warren signed Ekow the Engine Essuman boxed his most difficult opponent to date on paper and put in his most impressive performance. He fought Arvydas Trizno who had mixed in very good company and fought disciplined behind his jab to work the openings. Essuman comfortably won every round of the fight to run out 40-36 winner and will be looking to increase the level of opposition in his next few bouts.

The show closer was a returning Leigh Wood following a year and a half on the sidelines with injury. He boxed old foe Simas Volosinas who he fought back in 2013 to emerge victorious on points over 6. Leighthal looked as if he hadn’t missed a step with good angles and punch combinations. He put Volosinas down with a body shot late in the fight and it felt as if Wood could have stopped Volosinas if he pleased had he stepped up the gears. Leigh will be looking to contest titles before the year is closed.

With Scott Calow in association with Black Country promotions second foray into Nottingham proving to be a resounding success, further nights like this will be beckoning for the up and coming prospects along with the more seasoned campaigners. By the time the next one rolls around Nathan Kirk will be back, Wood and Essuman should have competed at higher levels. If the number of spectators keeps fluctuating as it has in the last year the leisure centre will struggle to hold this capacity.