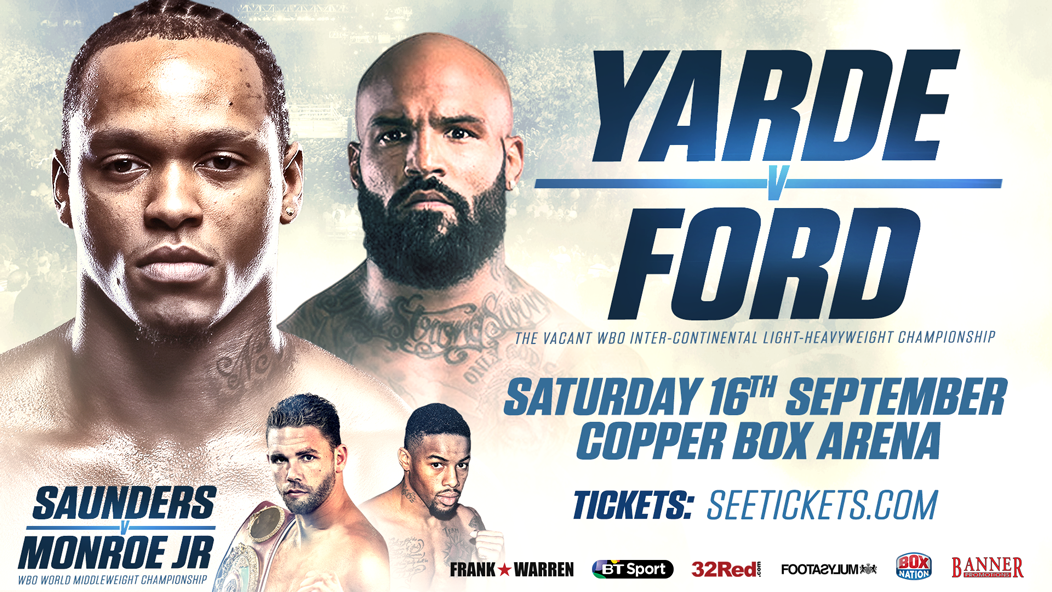 The match-up doubles up as an Official Final Eliminator for the Commonwealth Title as powerhouse Yarde aims to make it three belts in three fights at the East End venue.

Undefeated Yarde (12-0, 11 KO’s) claimed the Southern Arena title by defeating Chris Hobbs in May and added the WBO European strap in July with a first round demolition of Hungarian Richard Baranyi, along with a number eight spot in the organisation’s World rankings.

Ryan ‘The Real Deal’ Ford is unbeaten in 12 fights, with seven of his wins coming inside the distance. The Edmonton resident is determined to inflict a first career defeat on rising star Yarde.

“I want to test myself and keep moving on to new levels,” said Yarde. “It doesn’t make any sense to take a step back when I can keep moving towards my ultimate goal – a crack at winning a World Title.

“Frank Buglioni knocked out Hosea Burton – why would I want to fight him? I already have a higher World ranking than both of them and I’m a European Champion. When I come through this fight I’ll have a shot at yet another belt. Continued below…

“I’d have to wait until next Summer to face the British Champion and I’ll be way beyond that level by then. Both Burton and Buglioni have been knocked out so they are hardly a stick to be measured with.

“Frank was knocked out by guy with 10 losses and two draws, got shut out by Chudinov before he came back and knocked out Hosea Burton which kind of proves the point.”

“I still haven’t shown anywhere near my full potential, I’m looking forward to stepping it up now. I feel good, I feel healthy and I feel fit. I can’t wait to get back under the lights on September 16th.”

“Ford is Undefeated and ranked 20 places above current Commonwealth Champion Callum Johnson according to BoxRec and Burton hasn’t had a win at Light-Heavyweight since being knocked out by Buglioni. This is a step up for me from my last opponent and remember this is just my 13th fight. Who were they fighting by their 13th fight? Siarhei Khomitski and Nathan King, that’s who.”

Promoter Frank Warren said: “Anthony has a chance to add another belt to his growing collection on September 16th. The fight will also double-up as an eliminator for the Commonwealth title which adds a further option to the menu, there is a lot on the line here.”

“I made Buglioni a huge offer, more money than he’s ever earned to fight Anthony, but they didn’t want to know. The best should want to fight the best but I’m not going to waste Anthony’s time going down that route.

“Anthony guarantees entertainment in every fight. His hand-speed is brilliant and the way he picks his shots, he picks them so well. When you think he’s only had 24 fights in his whole career. Half amateur, half professional. That’s a statement for a young guy to be where he’s at.

“He will have to on top of his game as Ford is coming to win and I am expecting a competitive, explosive fight between two exciting punchers”