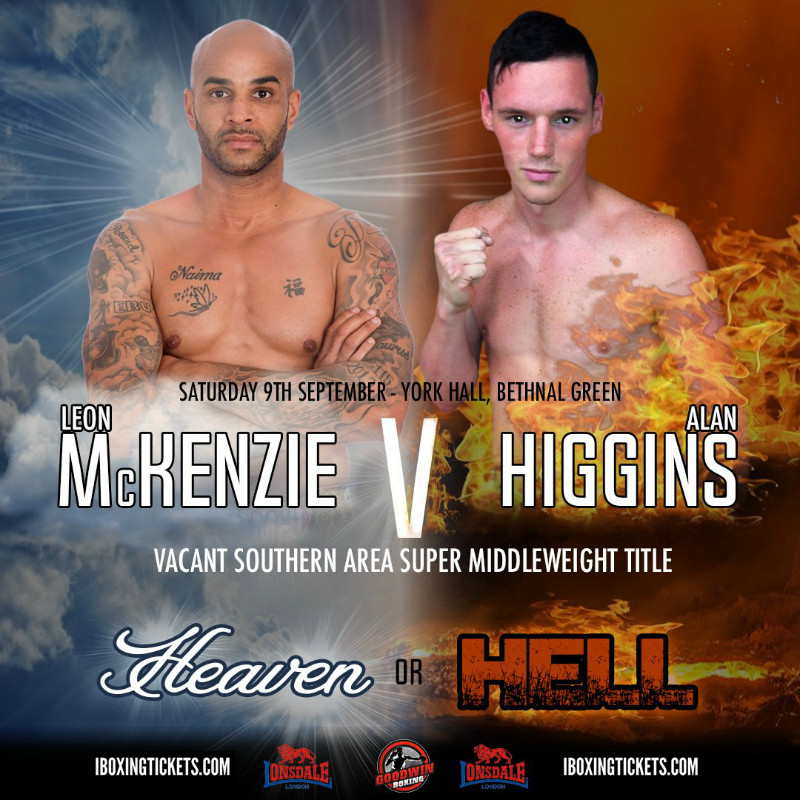 September sees our domestic schedule getting busy again, and one early instalment is starting to look like a very interesting show indeed. Goodwin Sports have pieced together a 17-fight card (at the time of writing) that takes place at York Hall in London on the 9th of September, featuring a number of high profile local fights that will surely combine to fill the venue to its rafters.

Headlining is an intriguing match between Leon McKenzie and Alan Higgins, with the vacant Southern Area super-middleweight title at stake. Both are coming off debatable losses, Higgins to Craig Richards in a fight in which many felt he did enough to win, and McKenzie to English champion Jahmaine Smyle in a closely contested split decision for the English belt. This, a well balanced match between two Londoners, is a logical fight that will leave the loser with some questions to answer. McKenzie, an athletic and physical southpaw, might make things awkward for Higgins early on. But at 39 years old, the balance will surely swing out of his favour the longer the fight progresses, and Higgins, at 29, will likely take control by halfway.

Both men have won half of their total wins by knockout, so there is a chance this bout could end early. However, the sensible money is on the fight going the distance, with Higgins coming through some rough patches to take a close victory on points and thus recapture the belt he lost in questionable fashion last time out.

Galway’s John O’Donnell has had an up-down career. He won the English welterweight title in 2007, lost his next fight, won the Commonwealth title two years later, never defended it, then lost a British title fight against Craig Watson in 2011. Since then, minus a small layoff, he finally appears to have found some consistency, winning the Southern Area and English welterweight titles in his last two contests. He defends the English belt in a main support slot against Tamuka Mucha, a capable and busy fighter who is coming off a shock defeat to the unheralded Serge Ambomo.

The defeat to Ambomo aside, Mucha’s last fight was against Paddy Gallagher, a high-action Irishman who can hit hard when he wants to. Despite winning against Gallagher, O’Donnell is a step up for the Reading man, who will have his work cut out for him against a more experienced operative at a consistently higher level. But O’Donnell should not take his opponent lightly, as he will be made to dig deep at times on his way to an exciting and competitive points win.

Portsmouth light heavyweight Joel McIntyre makes the first defence of his English title, set for 10. The domestic 175lbs division has a bright future, and a victory would see the champion taking part in it. His only loss (to Miles Shinkwin on points for the Southern Area title) was avenged two years later, when he claimed the English title in his hometown. Since then he has enjoyed some hard earned exposure, sparred with Chris Eubank Jnr, and appeared on the recent Eubank-Abraham undercard at Wembley Arena last month. A win will take further advantage of this momentum, and see his name included alongside Anthony Yarde, Frank Buglioni and Nathan Cleverly. 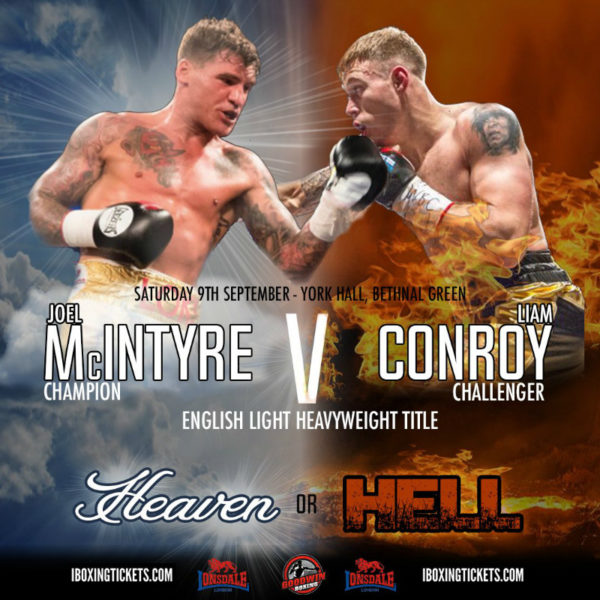 In his way is stands Northern Area champion Liam Conroy. Since an ill-advised stint at middleweight, the Cumbrian has found some form at light-heavy, winning six fights and drawing a seventh, receiving the aforementioned Area title and the WBC Youth Silver title for his efforts, the latter of which he won via a 4th round knockout of experienced gatekeeper Ferenc Albert. Speaking of knockouts, although he has only five of them in thirteen victories, three of them have come in his last five fights, which suggests the 25 year old is developing natural punch power as he matures. With busy styles and strong jabs possessed by both, their styles are likely to mix well, and could produce the fight of the night in a pick’em affair.

Jack Morris takes on Ossie Jervier at light heavyweight over 10 rounds. Morris, the Southern Area champion, is tipped to win but will have his hands full with Jervier, who’s war with Karl Wheeler last year proves he is no pushover despite his patchy record. Kay Prospere is back in action following his points defeat to Rakeem Noble last time out (another thrilling contest). The experienced Chris Adaway will be the evening’s opposition, and expect him to take Prospere the full 10.

Michael Devine, popular on the local circuit, keeps busy with a six rounder against Fonz Alexander. This should be a routine win for Devine, which will hopefully lead him to sterner tests in the future. Hasan Karkardi comes back from his first defeat to face Ryan Crawford in a 10 rounder. On paper, Karkardi looks the favourite, but Crawford’s fledgling record has seen him with some tough opponents early on, and he will be looking to upset the odds. A win for either man would be a good one.

Dwayne Jones Grant and Anesu Twala continue their educations in four rounders, and plenty of others are facing to-be-named opponents: Grant Dennis, Sam Gilley, Emran Hussein, Daniel Khan and Harjeet Singh all feature, while Jack Newham, Dennis Wahome and Youssef Khoumari make their professional debuts. All are set for four rounds to complete another excellent night of boxing in the capital.

More information on this show and tickets here…