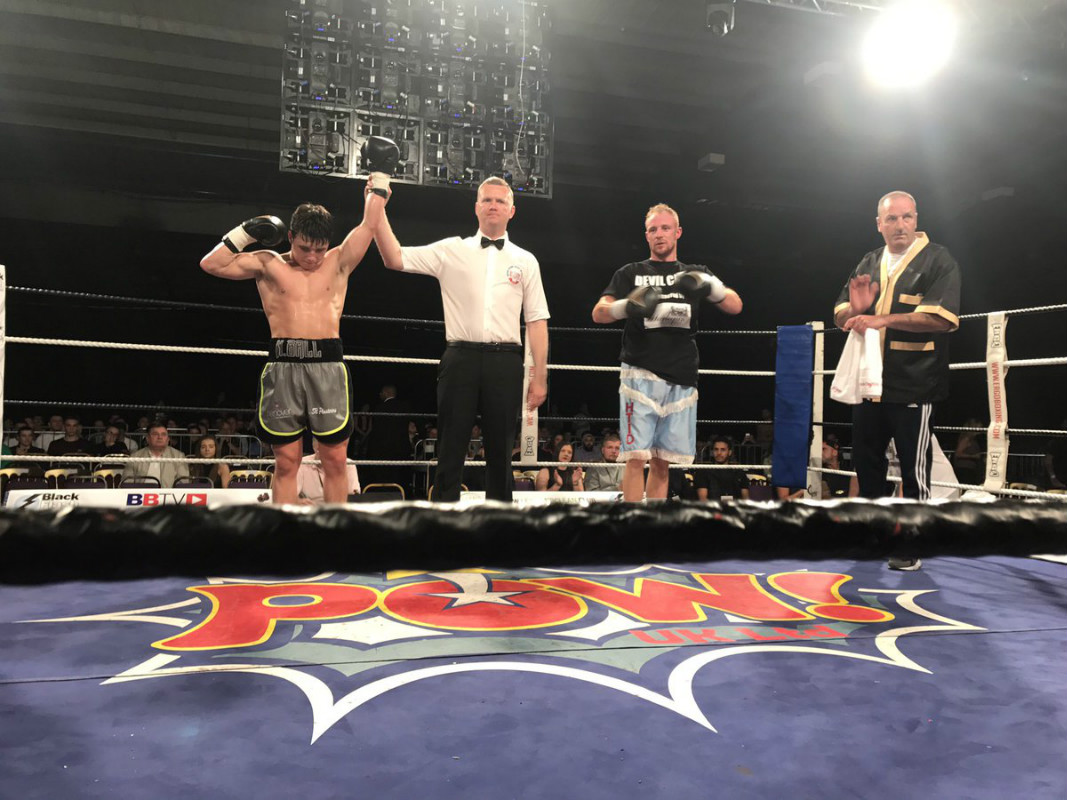 Recently many fans have complained over the quality of opponents for the house fighters on certain promoters cards.

I can honestly say that I don’t think any boxing fan in their right mind can ever complain about the quality of opponent on Black Flash Promotions bills at Manchester or Liverpool. In fact I feel the promotion on 29th July 2017 was one of the finest through and through I have been at in years. This promotion had everything, excellent boxing, sensational endings, upsets and excellent refereeing.

Once again the fans’ behaviour and sportsmanship was brilliant and a credit to the areas from which these wonderful fans came from. I am a firm believer that the sportsmanship of the fans present has much to do with the way the boxers, especially the visiting boxers, perform.

First up was the four round super feather bout between Liverpool’s Nick Ball against Jamie Quinn with the sweet moving Ball gaining a 40 – 36 verdict over an opponent who conteted every point.

Also over 4 rounds against Middleton’s Curtis Gargano was Newcastle dubutant 40 – Dean Laing who gained a 40 – 36 verdict. I was very impressed with Laing’s clever boxing and combinations off his excellent left jab, his left hooks to the were punches used to good effect. As usual Curtis put on a crowd pleasing bout.

In a four round women’s bout Manchester’s Stacey Copeland outpointed Poland’s Ester Koneacna over four rounds. Stacey boxed well behind her jab but the Polish girl made her fight for every point in a really excellent contest.

Next up Liverpool’s Steven Lewis stopped Zaurs Sadivos at 154 seconds of the third of a six rounder welter set to. Lewis was quick out of the traps and was all business, Sadivos punched back when he could and his gameness and heart could not be questioned. However it was Steven Lewis’ night and he looked the part.

In one of the upsets of the night a great favourite of mine, Chris Jenkinson stopped Arthif Daniel in 120 seconds of round four. Chris, who during his career has gone in against all the heavy iron and I said to my friend sitting by me, Alan, ‘Chris is up for it tonight’. And what a bout it was with both boxers boxing well behind the jab, firing combinations off the jab and every inch of canvas was fought for. However it was Chris who forced the breakthrough with his left hooks and after Artif Daniel had taken two counts the referee called a timely stoppage.

In the other night’s upset Spain’s Rafael Chiruta caused the referee to stop his contest against Reece Cartwright with seconds remaining of the first round after Reece had taken two counts and it was a timely stoppage. Cartwright came out purposely boxing well behind his jab. However Rafael spotted a weakness and started throwing hooks off his left jab. Reece tried to keep to his boxing but the Spaniard was going for broke and dropped him for a count of 8.

There was no stopping Rafael now as he smelled victory and after another onslaught and Cartwright taking a count, the referee had seen enough.

Liverpool’s Marcel Braithwaite gave a virtuoso performance in his super bantam clash with Hull’s Luke Fash. His footwork and defensive work was excellent, his variety of punches and combinations punches were superb.

In Fash he was facing a resolute opponent whose gameness could not be faulted and fired back when able. Marcel took the verdict over 4 rounds by 40 – 36. Braithwaite is an excellent talent who in my opinion has a wonderful future in the game.

Ancoats’ light middle Denton Vassell made a welcome return to the ring and gained a 39 – 38 verdict over Edvinas Puplauskai in a very entertaining nip and tuck affair. Denton shed his ring rust and worked very hard for his win, it’s nice to see him back in action.

Congo’s favourite heavyweight Martin Bakole Ilunga needed just 1 min 56 seconds of round no to finish the night’s proceedings for Londoner Dominic Akinlade. Bakole was all business, fair play to Akinlade he tried to keep with him and stem the tide but it was to no avail as Martin’s heavy punches off his jab got through and Dominic hit the canvas twice, he had no chance of beating the count. Martin Bakole could well be a man to be reckoned with.

In a bout scheduled for 6 rounds Lyndon Arthur once again scored an impressive stoppage win by K O’ing Istvan Orsos in the second. The light heavy division is full of excellent young prospects, some are being touted as the next big thing. However, I believe Lyndon Arthur is the man who will make waves.

Once again he came out taking a look at what Istvan had to offer, boxed behind his jab and used a variety of punches to find a weakness.

In the second he knew the score and went to work with his vicious punches to head and body, a beautiful left hook sent Orsos down. On rising he tried to fight back, the proceedings were over for the night.

In the main event scheduled for ten rounds that champion in waiting, Zelfa ‘Brown Flash’ Barrett needed only one round to curtail his bout with Jordan Ellison. Taking nothing away from Jordan who was working quite well and it looked as if the boy fancied the job, however Zelfa was in top form moving from side to side prying with his jab, boxing and looking for openings then like quicksilver he struck a left jab followed by a left hook to the body and a beautiful right cross.

Ellison gamely rose, Zelfa was in full flight now and so cool and clinical, a left hook to the head and Jordan was down again. The referee rightly stopped the contest, though the medics were called in, Jordan recovered to make his own way from the ring after congratulating Zelfa.

On the clinical way Zelfa ‘Brown Flash’ Barrett goes about his business a world title would be within his reach.

Once again that wonderful warrior William Warburton made a young prospect, Jake Kelly, work hard for his victory losing by the score of 39 – 38. I was very impressed with Kelly’s work rate and body punching, however Warburton is one tough hombre and nullified the attacks and the counter with good effect. Young Jake will have learned more in those 4 rounds than in a dozen one round K.O.’s. William Warburton is a credit to boxing and an education for these young aspiring pro’s.

In the last contest of the night we were treated to a fight that was not far off a Zale vs Graziano bout – it featured Spain’s Diego Costa and the North East’s Greg O’Neill, won by Diego when O’Neil had given his all and just could not carry on. If both boys started with a left jab it was the only ones they threw for three rounds. As these boys threw every punch to separate each other from their senses. How many knock downs took place between these boys, I lost count as the crowd was in a frenzy. Costa forced the first one with a left hook only for Greg to rise and return the compliment at the end of the first round.

In the second round both boys hit the floor again. Ring craft and science at this moment of time was not in the dictionary and this was pure and simple survival. Diego hit the floor 3 times in the second but he too had inflicted damage.

The third was fought amid tremendous noise as both boys went for broke and in the end it was Diego Costa who triumphed in a bout that will never be forgotten by those who witnessed such a spectacle. These boys never had quit in their vocabulary or dictionary.

Thanks to all the boxers, officials and all associated with Black Flash Promotions for putting such an epic night on. My Irish friend, ex Gaelic football and hurling star Alan O’Neil who is also an award winning playwright, and accompanied me on the night to Manchester, said that he had never witnessed such an event and such a sporting crowd.