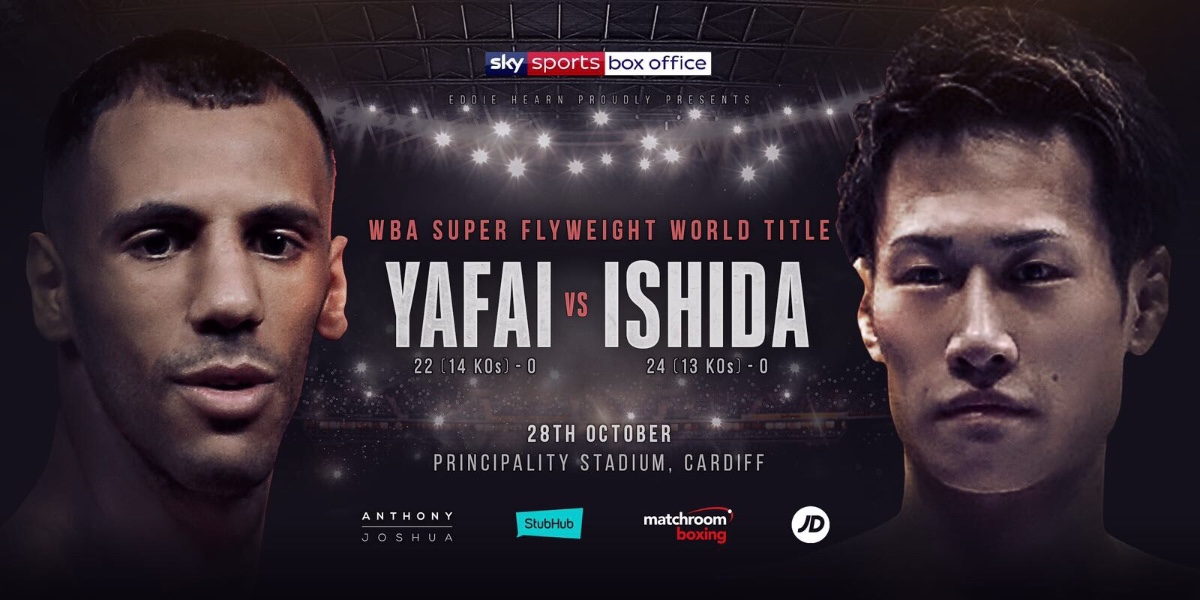 Yafai puts his strap on the line for the second time having successfully seen off tough Japanese challenger Suguru Muranaka in Birmingham in May and it’s another test from the land of the rising sun that Yafai faces in Wales.

Ishida brings a 24-0 record into his first World title fight, and the 26 year old will ask new questions of the champion standing four inches taller than Yafai at 5ft 8in.

The former GB star has no doubts that he will keep the title he won against Luis Concepcion in December in style, and is ready to dazzle on the big stage.

“It should be a great fight,” said Yafai. “We’re both undefeated and it looks an interesting one but it’s a fight I’m 100 per cent fully expecting to win and win in style.

“We started camp about four weeks ago but I’ve been ticking over before that. We’ve been building up slowly but now we’re stepping up the intensity.

“I’ve found some good videos of him and I’ve watched a couple of his fights already but over the next eight weeks, I’ll be studying them in more detail with my team.

“He looks pretty tall. I think that’s his biggest attribute going for him. He’s busy with his jab and he seems comfortable on the back foot. We’ll see on October 28 if he does anything else but if he plans on using just his height and jab it won’t be enough to beat someone like me.

“The win over Muranaka was good at times. There were things in the fight I didn’t do too well, which we’ve been working on. But that aside, we got the rounds in at a very high pace. The guy was tough, he took everything and fired back himself.”

The Super-Flyweight division takes centre-stage on Saturday night in California when Srisaket Sor Rungvisai meets Roman Gonzalez in a rematch for the WBA title and Naoya Inoue defends the WBO crown against Antonio Neves plus a WBC eliminator between Carlos Cuadras and Juan Estrada – and Yafai will be glued to Sky Sports in the early hours of Sunday morning to watch the men – and titles – he wants to grab with both hands next year.

“I’m looking to box off my mandatory and then get in that mix,” said Yafai. “If we can bring one of those guys over to the U.K it would be great. I’m sure they see how boxing is booming over here. It’s a thriving division.

“I’ve got Gonzalez winning on points. I thought he nicked the first fight by a round or two, but I think it’ll be quite convincing this time.

“Inoue will win inside six rounds against Nieves. I don’t think that’s much of a test for him in all honesty. The Estrada vs. Cuadras fight is very interesting, I think Estrada might just edge that.”

“This is a great fight and the toughest of Kal’s career to date,” said promoter Eddie Hearn. “Ishida is highly rated and looking to follow his countryman Inoue to the World title. It’s an incredible time for the division and these little men are becoming real stars of the sport – a win in Cardiff for Kal and its unification time in 2018.”

Yafai’s clash with Ishida is the first fight to be added to the undercard of Heavyweight king Anthony Joshua MBE’s World title defence against IBF mandatory challenger Kubrat Pulev.

An announcement on ticket prices and on-sale dates will be made soon.