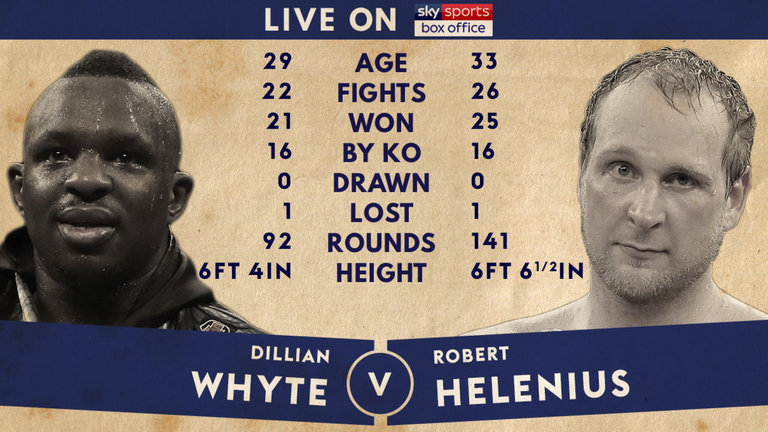 WHYTE CLASHES WITH HELENIUS IN CARDIFF

Whyte made his US debut in August with a 16th KO from 21 wins over Malcolm Tann in his first action since his epic win over Dereck Chisora in their fight of the year contender in Manchester in December.

Whyte has been hunting a big name bout to move into prime position to land a World title fight and has landed that test in the shape of ‘The Nordic Nightmare’, and the two-time European champion Helenius is gunning for a win to land his first World title shot.

Brixton’s Whyte is hunting his own World title showdown with WBC king Wilder, and both he and promoter Eddie Hearn believe a standout win over the giant Finnish-Swede will bring that fight a step closer.

“It’s been a very frustrating few months trying to get someone to fight me,” said Whyte. “I thank Robert for stepping up and in two weeks’ time we will fight for the WBC Silver title in Cardiff. I love to fight and I’m looking forward to being back in the ring, getting the victory and moving on to challenge for the World Heavyweight title.”

“This is a huge fight and I’m excited about fighting the winner of last December’s thriller between Whyte and Chisora,” said Helenius. “Chisora and I were scheduled to fight in May but he ran. To my understanding Dillian is not a runner and he will stand and fight. This is a big fight for the Heavyweight division and may the best man win.”

“This is a fight we have been working on for some time and I’m pleased to add it to the huge October 28 show in Cardiff,” said promoter Eddie Hearn. “I think we have made it very clear, we want to make Dillian vs. Deontay Wilder and this WBC Silver title will put us in prime position. Helenius is a giant of a man with plenty of experience and this is a tough test for Dillian, it’s going to be explosive.”

Whyte’s clash with Helenius is part of a huge night of action in Wales, topped by Anthony Joshua MBE’s World Heavyweight title defence against Carlos Takam.

A star-studded cast line-up in support of Joshua’s clash with the Bulgarian, as Kal Yafai defends his WBA Wold Super-Flyweight title against Japanese mandatory challenger Sho Ishida and Irish sensation Katie Taylor challenges for her first World title as she takes on two-weight World champion Anahi Esther Sanchez for the WBA Lightweight crown.