Around and about with Tommy Dix: Ringside for a Great Birkenhead Venture Amateur Show 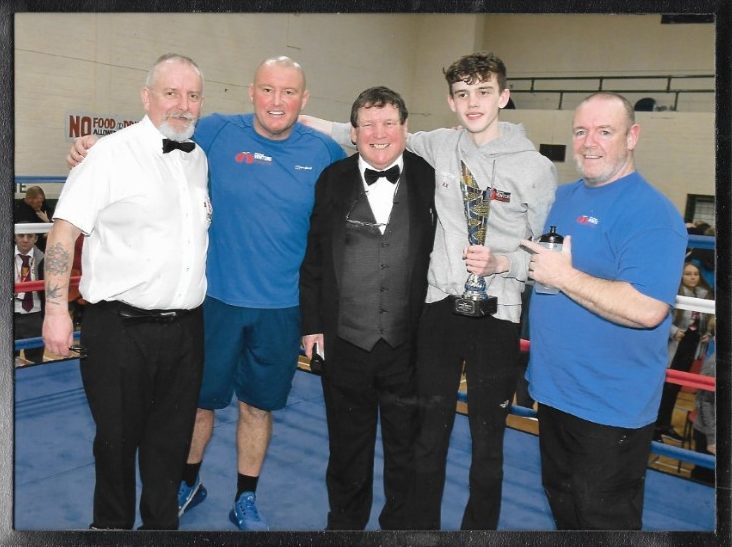 Birkenhead Venture ABC  held their annual show at the Bibby Centre. This show had everything, this was not an amateur boxing show it was an epic.

I am in my eightieth year and this was the greatest show I have ever witnessed no words from my humble pen can ever do justice to this show. The sportsmanship of the capacity house was a credit to the sport and the locality from where these fans came from.

Wild cards, Ethan Tyson won a tight verdict over Venture’s Matthew Barclam in another humdinger of  bout. After two such wonderful bouts Leon Burns win over Seftons Harley Robinson was more than equal and produced a wonderful bout of skill.

Ventures Kieran Mooney won a tight verdict over Bradley Broadbent in a bout that had everything skill precise punching sound defensive quality. It was a real nip and tuck affair and had the sporting ground on their feet. Both boys scored with eye catching combinations off the jab with Kieran just having the edge. Kieran received best boxer of the show award with this performance but Bradley Broadbent is a boy who can go a long way and has a good future. Ventures Tom Musker won over Derrys James Westbury in another hard fought bout with Musker’s boxing skills coming to the fore but James Valiantly stuck to his task.

Solly’s Adam Smith defeated Ventures Callum Day in another cracker Jack of a contest both  boys worked well off the jab and showed very sound basic skills. Once more it was a very tight verdict.

Ventures Justin Beacan edged out Tower Hills Louis Pennington in a hard hitting contest with both boys boxing as if their lives depended on the outcome. Justin worked well behind his jab and throwing nice combinations however louis was up to it and was only to willing to join in at close quarters. This contest see sawed from one to the other with both boys leaving it all in the ring.

In the closing bout of the show Ventures Sonny Allinson scored a split verdict over ‘Terry Spencer’s Leon Williams in one give and take contest, at times both boys went for broke and it became a war of attrition. Just when one seemed to be gaining control the other would come storming back how on earth none of those took a count I’ll never know. Both boys threw hard combinations of their jabs showed good skills however the pace of the bout was fantastic the whole capacity ground were on their feet as both boys punching it out at the final bell with Sonny gaining the verdict. In all my years in the game I have never seen so many tight verdicts Sean Trooden deserves credit for such wonderful match making and it was my pleasure to present the prizes at such an epic.