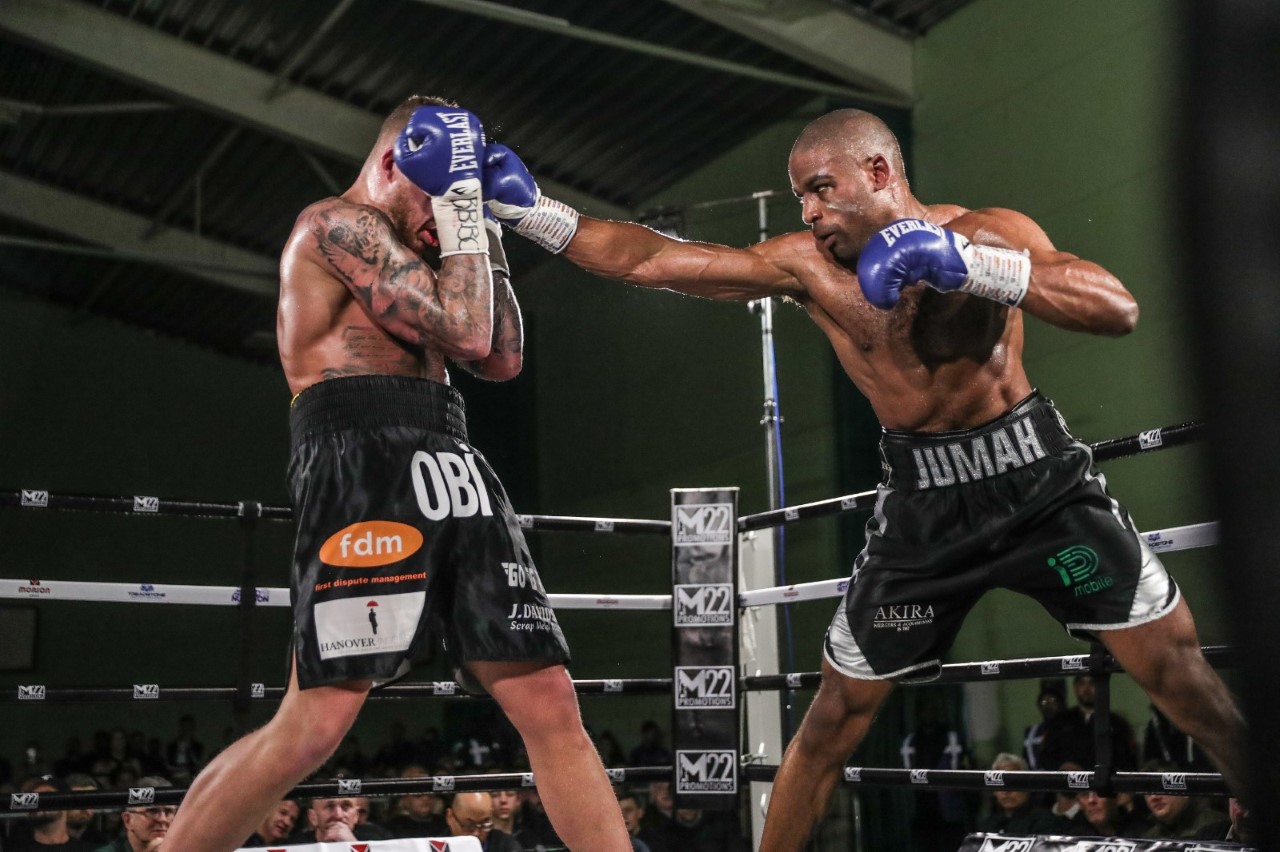 The British boxing calendar commenced in the most dramatic fashion on Sunday, as Deion Jumah outpointed Sam Hyde over 12 compelling rounds at the Woodhouse Park Lifestyle Centre in Wythenshawe.

Making the first defence of his English cruiserweight title, Jumah was forced to dig deep on numerous occasions during the dramatic bout, which also served as a final eliminator for the British title.

After a relatively cagey opening couple of rounds the contest came to live in the fourth as Hyde found a home for his vicious right hands, before Jumah rallied back with solid punches to the body.

The champion’s fortune increased as he altered his angles, with his sharp left proving an efficient weapon in halting the progress of the gutsy challenger, who marched forward seeking success with his right hand.

The middle rounds saw both taking turns to back each other up and tee off powerful combinations, roared on by a capacity crowd that was gripped by two fighters leaving it all on the line.

As it seemed momentum was swaying in Jumah’s direction, Hyde once again forced him to endure a period of turbulence at the end of the eleventh, driving him against the ropes amidst a flurry of significant shots.

Speaking to British Boxers TV after the fight, Jumah emphasised the importance of his endurance and what he described as “the hardest camp he has ever been through”.

He stated: “I felt good, we put the work in during this camp, it was the hardest camp I’ve ever been through and we were ready for a hard fight tonight and it was a hard fight.

“I was confident with the camp I have been through and with the great sparring that I was going to come on in the  later rounds and that’s exactly what happened.”

When asked whether he was hurt during the bout, the 30-year-old added: “I was never hurt, but Sam is really strong, when he hits you, your whole body moves. He surprised me a few times, I think he is a better boxer than people give him credit for.”

Jumah’s coach Gary Logan also heaped praise on Hyde: “He was technically a lot more deceptive than what we thought he would be, he doesn’t just walk forward in straight lines, he was fainting, and he didn’t have a regular rhythm that we could get used to.”

Eyeing up a potential opportunity at the Lonsdale belt, Jumah continued: “I’ve said it before that this is the harder fight and Sam is technically better than Richard, we are definitely ready for Richard, I have his number for sure.”

The M22 Promotions card also saw 21-year-old Mark Jeffers capture his inaugural career title in his eleventh victory, dispatching of Ben Thomas with a thunderous body shot in the fourth round.

The Jennings Gym prodigy didn’t let a cut above the eye wilt his efforts, as he stormed forward with intent and piled on the pressure to the delight of his vocal fanbase.

In what was the third meeting between the pair, Morrison showcased his sharp and cynical jab as he dictated the pace of the engaging bout.

Having made his professional debut less than a year ago, the slick Gerome Warburton remained undefeated with his fifth consecutive win, unanimously outpointing Salford’s Ryan Hibbert.