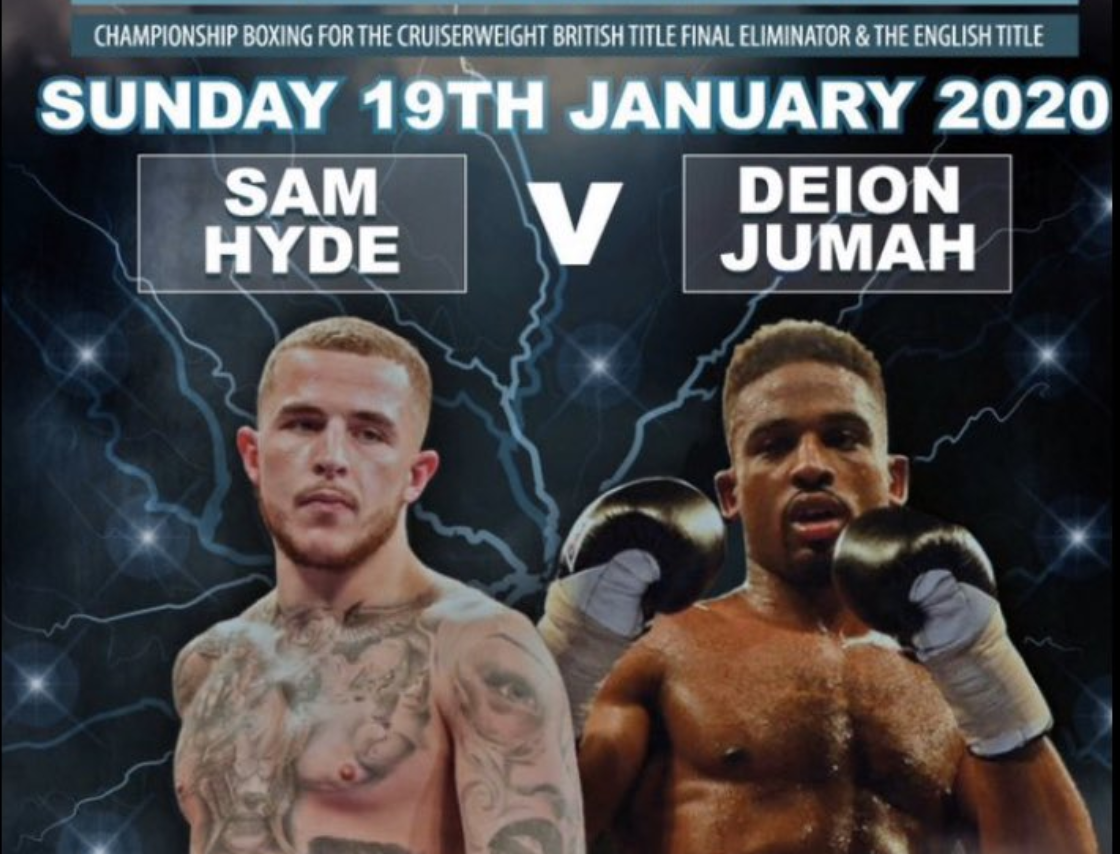 The stakes are high on Sunday as Sam Hyde and Deion Jumah battle for not only the English cruiserweight title, but also for the chance to take on newly crowned British champion Richard Riakporhe.

The show is hosted by M22 Promotions and Joe Gallagher, who also serves as Hyde’s trainer. Speaking to British Boxers TV, he emphasised that the opportunity to avenge his sole defeat against Riakporhe is intensifying the motivation of Hyde ahead of Sunday’s clash.

Commenting on his fighter’s mindset, Gallagher stated: “It’s a huge motivation that first of all he’s fighting for the English title, he’s fighting Deion Jumah, who is a serious talent, which adds that fear factor, but then to win becoming the mandatory would be the icing on the cake.

“What we don’t want then, is for Richard Riakporhe to be giving up the British title and moving on, because that would then look like Riakporhe is beginning to run. There’s unfinished business with Sam Hyde there, last year he tried to avoid him for whatever reason, so if Sam Hyde wins, I hope Riakporhe does the right thing and settles the unfinished business.”

The victor earning a tilt at the Lonsdale belt only enhances the anticipation for the spectacular cruiserweight main event at the sold out Woodhouse Park Lifestyle Centre in Wythenshawe on Sunday.

The Manchester trainer emphasised: “What we have here are two talented and ambitious kids, that want the big guns, Deion Jumah has a point to prove, as does Sam Hyde and that is what is going to make this such an exciting and explosive fight.”

Looking ahead to Sunday’s main event, he continued: “Jumah has been making a lot of noise, calling out Okolie, calling out Riakporhe and he wants to make a statement.

“Deion Jumah is the favourite, Sam Hyde is the live underdog. I won the purse bids to give Sam home advantage, if that will count for anything, but it’s better fighting here in Wythenshawe this weekend, where Sam’s last bout was, than going down to London.

“Full credit to them, neither are ducking anyone and this is worthy of being British title fight, it’s that good. It reminds me of when Anthony Crolla boxed Kieran Farrell or Andy Morris, there were only ever English titles on the line, but they were worthy of better belts.

“It’s a really exciting fight, in an explosive division and I’m sure the fans will get their money’s worth on Sunday.”

Having notched up four consecutive victories in 2019, Manchester middleweight Marcus Morrison also fights on the card and after a significant victory in Italy over Emanuele Blandamura, Gallagher was adamant he would “stay active and keep the momentum going at the start of this year”.

“We have got to get Sunday out the way, then we’ll sit down and look at what’s on the table and it’ll be up to him and Pat Barrett to decide which is the option they want to pursue.”

Mapping out the rest of the exciting bill in Manchester on Sunday, the first trainer to twice be named Boxing News trainer of the year detailed: “We have a great Central Area super-middleweight title between Michael Jennings trained fighter Mark Jeffers and Ben Thomas, who is undefeated in his last five and is coming to fight.

“It’s fantastic to have two title fights on the card and what a huge opportunity for Mark Jeffers, who is developing well. I have had them both in the gym before and I’m incredibly intrigued by this one, it’s a really good fight and one I’m looking forward to watching.”

He concluded: “There’s something for everyone on the card, with undefeated prospect Gerome Warburton fighting, it’s a great chance for him to showcase what he can do.

Although his career as a promoter is in its infancy, Gallagher was keen to express enthusiasm about his future in the role, while also lauding the work of Steve Wood and Pat Barrett who have been pivotal in keeping the Manchester boxing scene thriving.