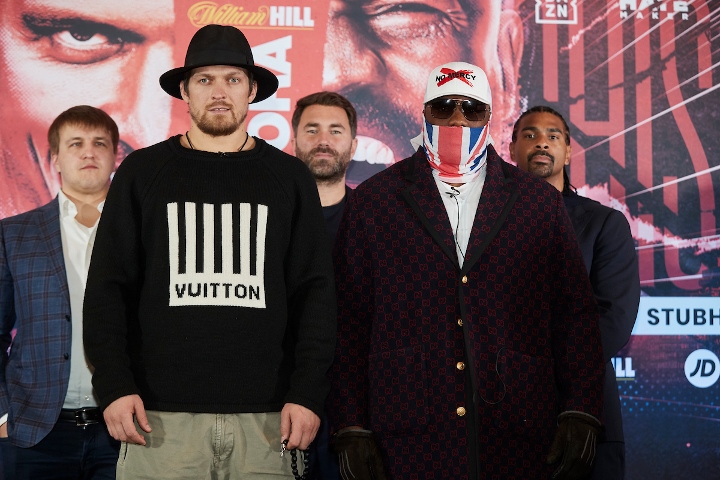 Battle lines have been drawn as Dereck Chisora prepares to put his momentum on the line against former cruiserweight king, Oleksandr Usyk.

With the fight almost upon us and excitement at fever pitch, BBTV got the insight and predictions of the pros.

What a great fight this is weekend, Dereck Chisora vs Oleksandr Usyk. Great matchup and a great clash of styles. ‘Del Boy is really looking good of late and I’m expecting a really good entertaining fight on Saturday. But, for me, skills pay the bills and I do think Usyk will win the fight. Probably on points.

I expect him to be a clear winner, certainly won’t be comfortable but I’m expecting a really good fight.

You can’t write Chisora off and if I was to pick, I would probably pick Chisora – because of his size and he is so durable and relentless, so who knows whether Usyk can put up with that sort of pressure from a big man like Chisora, so for that reason I’m going with Chisora.

I do see Usyk winning on points, he is moving up in weight but he did box as a heavyweight as an amateur as well and has beaten the likes of Joe Joyce and probably many others, so he is used to fighting big men, albeit over shorter rounds, but I’m going to go with Usyk on points.

I think it’s going to be a good fight for as long as it lasts. I’d love to see Chisora win but I just can’t see it, it’s a big ask. I think Usyk will win it on points, maybe could get a late stoppage. Chisora will give him problems, he would give anyone problems, he’s a big strong man but I just think Usyk is gonna be very hard to hit is going to be a lot faster than Chisora and will tire him out, he may get him late on.

It’s going to be a good fight and it’s going to be tough for both of them, but I feel like Usyk will win it on points. Every heavyweight has a chance don’t they, one of them big shots and they could be on their arse – so we will see.

I want Chisora to beat him. It can either go two ways, Chisora mauls him or Usyk boxes the shit out of him. But, I’m rooting for my man, Chisora. Usyk could be too slick, but my heart is going with Chisora. Win or lose – I am backing him.

He just has to close him down and maul him, he can’t let him get his boxing skills and his jab off.

I feel that Usyk will use his movement and he’ll box round Dereck – he’d be a fool to stand and fight with him and I think that he will play with him that much that I’m predicting a late retirement from Chisora.