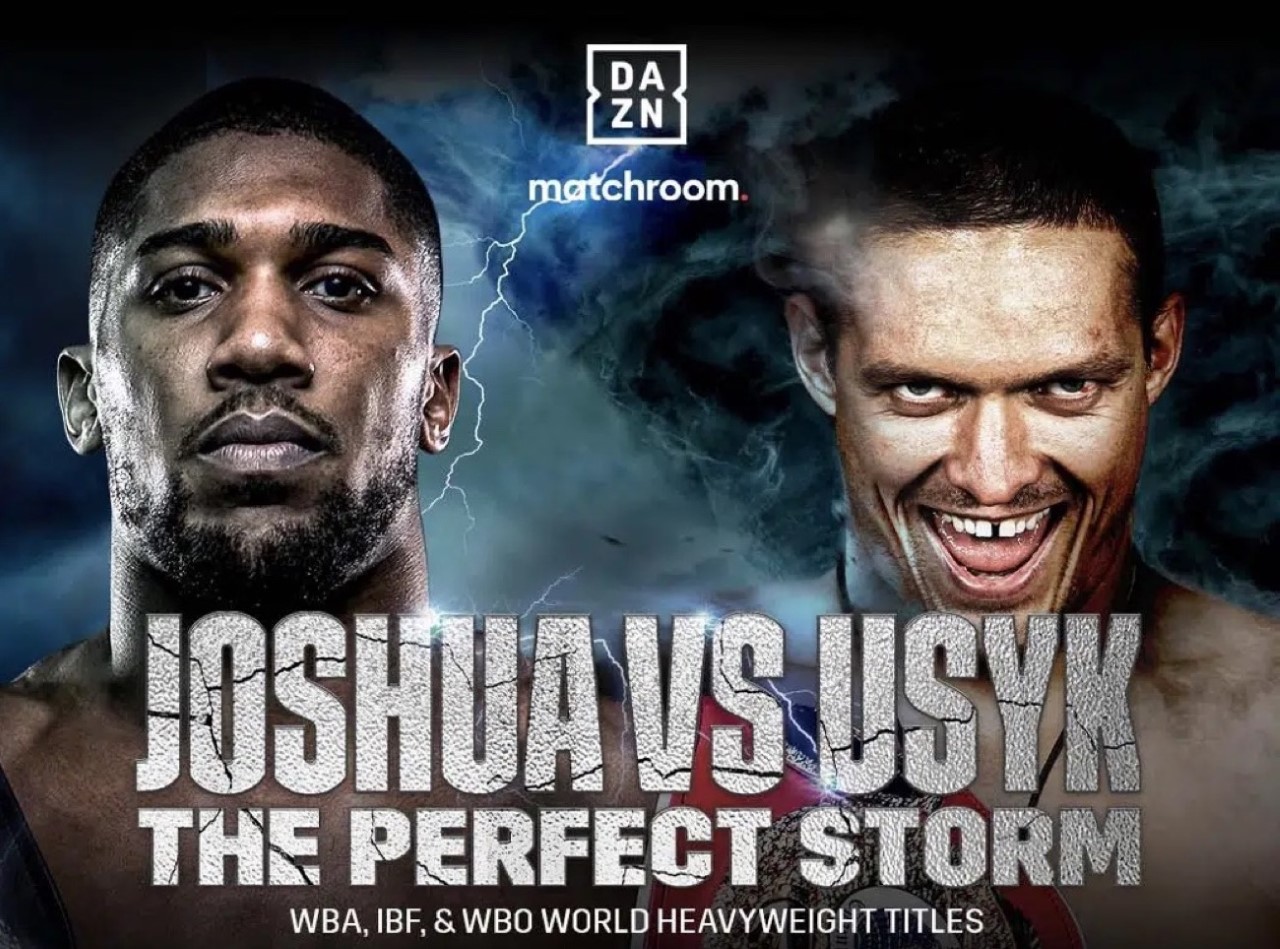 Anthony Joshua Vs Oleksandr Usyk fight week is upon us. One of the most intriguing heavyweight match ups in recent times, the former Undisputed Cruiserweight World Champion Oleksandr Usyk will face off against the current Unified Heavyweight World Champion, Anthony Joshua, as WBO mandatory challenger. Fight fans across the UK are split as to how this fight will go down, live on Sky Sports Box Office from Tottenham Hotspur Stadium.

Credit has to be given here, this is a fantastic fight. Extremely fascinating and intriguing, Oleksandr Usyk forced his way to the mandatory position through his move up in weight-class from Cruiserweight to Heavyweight with the WBO, and Anthony Joshua has kept his promise of keeping hold of all of his world championship belts by following all mandatory challenges. No issues, no speed bumps, no politics. Just how boxing should be.

The fight we were hoping for was Anthony Joshua Vs Tyson Fury for the Undisputed Heavyweight Championship of the World, but it wasn’t meant to be (not just yet, anyway). So ensuring that you meet your mandatory obligations in a fight against someone’s prowess and stature of Oleksandr Usyk is refreshing and Anthony Joshua deserves credit; this is an incredibly tough fight for both men on Saturday night.

How does the fight play out? The general consensus amongst fight fans is that Anthony Joshua will be too big for Oleksandr Usyk with an inferior range. A disciplined performance similar to the Andy Ruiz Jr. rematch and Kubrat Pulev showdown is being touted, with a 12 round shutout for Anthony Joshua in the pipeline.

However, Oleksandr Usyk is an outstanding boxer; agile, slick and dangerous with a heavy southpaw left hook, there is no way Anthony Joshua can rely on just range and distance on Saturday night. If there are pockets of space to be found, Oleksandr Usyk will find them. His achievements as an amateur saw him rise to the very top of amateur boxing winning the Gold Medal at the London 2012 Olympics at Heavyweight (where Anthony Joshua also won Gold at Super Heavyweight). His achievements as a professional have also been outstanding, becoming undisputed Cruiserweight World Champion after just 15 Professional fights where he amassed a résumé including victories against Krzysztof Glowacki, Michael Hunter, Marco Huck, Mairis Briedis, Murat Gassiev and a defence against Tony Bellew; all of which were in their home countries. His achievements include;

That résumé of achievements is outstanding, and especially after 15 fights. Oleksandr Usyk’s move to Heavyweight started with a routine victory over Chazz Witherspoon in America, but Derek Chisora offered up a much tougher and stronger challenge; this fight has given a lot of fight fans the view that Oleksandr Usyk maystruggle with Anthony Joshua’s sheer size and strength.

With an equally strong résumé and also never shirking a challenge, Anthony Joshua brings explosive, pile-driving punches along with a cautious boxing brain (recently displayed in his last two fights with Andy Ruiz Jr. II and Kubrat Pulev). Looking at his most slender since the Joseph Parker and Andy Ruiz Jr. II fights, there is no doubt that Anthony Joshua will have prepared diligently for the tough test on Saturday night.

The Undercard
Lawrence Okolie (16-0) makes the first defence of his WBO Cruiserweight World Title against Montenegrin, Dilan Prašović (15-0). Okolie won the world title in March of this year where he defeated battle hardened Krzysztof Glowacki for the vacant title via a 6th round a 6th round knock out. After 16 professional fights, Lawrence Okolies rise to World Title dreams has been impressive, regardless of what people view his fighting style as. Commonwealth, British and European Titles have been obtained along the way, with the WBO World Title claimed only the beginning for Lawrence Okolie with ambitions of unifying in the not so distant future.

Dilan Prašović arrives in the UK with an unbeaten Cruiserweight record and with ambitions of his own to become a world champion. Ranked 27th in the world, there is the view that this fight should be a routine victory for Okolie before pushing for unifications.

Callum Smith (27-1) makes his anticipated return to the ring after his first professional defeat to Canelo Álvarez in December 2020, where he has made the move up to Light Heavyweight; something which has always been touted as such a big Super Middleweight. He will be facing Lenin Castillo (21-3-1) of the Dominican Republic in his first professional fight at Light Heavyweight. Castillo has only 3 defeats as a professional and has gone the distance with the likes of Dmitry Bivol and Marcus Browne, and he will provide a tough test for Mundo on Saturday night.

Maxim Prodam (19-0-1) will face off against Florian Marku (8-0-1) in a Southeastern European Welterweight match up for the IBF International Welterweight Title. Prodam of Romania is a tough and durable welterweight with an unbeaten record and a 75% knockout ratio in his 20 Professional fights. Albanian Florian Marku always offers game opposition and will ensure pride is on the line on Saturday night. Again, another interesting and intriguing matchup.

Campbell Hatton (3-0) continues his journey in the professional ranks where he will face Sonni Martinez of Uruguay. 258 Management have ensured that they have got Campbell on the biggest stages in his first three professional fights including Whyte Vs Povetkin (Rumble on the Rock), Anthony Joshua Vs Kubrat Pulev and Fight Camp, and there is no stopping his rise with another great experience on Saturday night at Tottenham Hotspur Stadium. The Blue Moon continues to rise in the Perfect Storm on Saturday night!

Light Heavyweight clash Daniel Lapin (4-0) Vs Pawel Martyniuk (4-7), and a Middleweight bout between Christopher Ousley (12-0) Vs Khasan Baysangurov (21-1) make up the rest of the card on Saturday night.

Finally, big credit to Matchroom Boxing for continuing their commitment to allowing NHS workers the opportunity to obtain a free ticket to a boxing match which has been included for Anthony Joshua vs Oleksandr Usyk. Head over to Matchroom Boxing and click the link to enter the ballot.

The Perfect Storm is upon us!