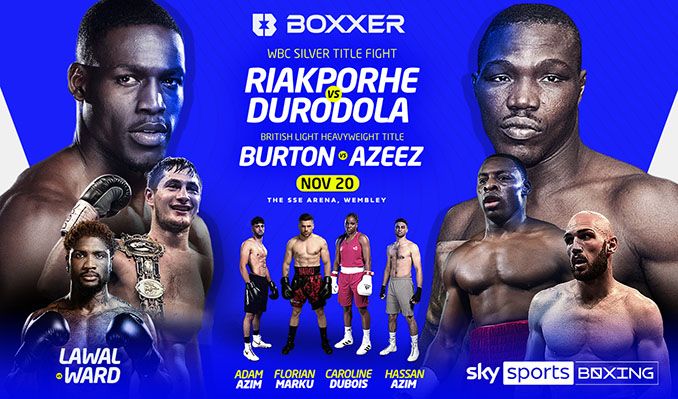 Richard Riakporhe looks to continue his assent at cruiserweight this weekend on Benjamin Shalom’s third BOXXER show with Sky Sports at London’s Wembley Arena. In the opposing corner will stand Olanrewaju Durodola, a man whose 36 wins have been delivered by way of knockout and has shared the ring with the likes of Maxim Vlasov, Mairis Breidis and most recently Ilunga Makabu.

Durodola is now in his early forties and so may be on the downslide in his career, however for Riakporhe to step into the ring with a man with his experience and who has fought at his level is impressive. Riakporhe, who is now one of the frontmen for the Sky Sports and Boxxer stable, has a perfect record of 12 wins with 8 knockouts, and saw off Poland’s Krzysztof Twardowski last time out with a comfortable points victory over eight rounds. The bout provided the London man an opportunity to dust off the cobwebs in what was his first fight in almost two years, and he will hope to make a statement on Saturday night as he moves closer to a shot at a potential world title eliminator next year.

The Briton, who has previously emerged victorious over the likes of Sam Hyde, Tommy McCarthy, Jack Massey and Chris Billam-Smith domestically, appears to have chosen the WBC route in terms of a shot at world honours, standing at number ten in their cruiserweight rankings, with Durodola fourth respectively. However, despite those previous wins against the likes of Billam-Smith and McCarthy, both men stand above him with the World Boxing Council (at ninth and seventh respectively), which is testament to just how inactivity had left Riakporhe in the wind as others around him kicked on. There is therefore the potential for big domestic rematches with both in the not-so-distant future, providing Riakporhe sees off the experienced Nigerian on Saturday night. Fingers-crossed we get to see the matchups we want in a division that may appear to lack depth internationally at world level but is certainly going strong domestically.

The co-main event features a battle for the British Light-Heavyweight title between Hosea Burton (26-2) and Dan Azeez (14-0) in what is arguably the standout bout on the card. Burton, who has previously held this title with a win over Miles Shinkwin in 2016 and looked as though he would attain it again against Frank Buglioni before he was stopped in the twelfth round in that same year, looks to regain some momentum in his career following defeat to Ricards Bolotniks in the MTK Global Contract final out in Austria. He has since picked up a victory with a sixth-round knockout of Liam Conroy in Bolton earlier this year, and a win against the so far undefeated Azeez on Saturday will propel back towards the big domestic fights at 175lbs.

Dan Azeez, meanwhile, has taken the more ‘traditional’ yet now increasingly uncommon domestic route, so far picking up the Southern Area and English titles at 175lbs in his first fourteen fights. If he can add the British this Saturday night, he himself will throw himself into the pot of domestic fighters in potential mouth-watering fights in the division, along with the likes of Lyndon Arthur, Callum Johnson, Craig Richards, Joshua Buatsi and Anthony Yarde. Azeez may not have received the same levels of attention and focus as some of those names, only sporadically appearing on big, televised bouts, but his wins over Andre Sterling, Charlie Duffield and Ricky Summers are deserving of considerable praise for a man who does not possess the most extensive amateur background. We often hear bouts described as ‘crossroad fights’ in boxing but this is one which is truly deserving of such a tag. On one hand you have a man looking to regain a foothold in a division where its strong depth makes it easy for you to be forgotten about and left behind, while on the other is a fighter looking to climb another rung on the boxing ladder full of hope and anticipation in what will be his first rodeo at British title level.

The always entertaining Albanian welterweight Florian Marku also features this Saturday night in his eleventh bout as he moves towards securing a big fight against one of his fellow 147lb companions. Jorick Luisetto of France (11-2) will be in the red corner, a man who has faced nobody of note thus far in his professional career and has suffered two defeats but has never been stopped. One would expect Marku to emerge unscathed, maintaining his undefeated professional record in what should ultimately prove a runout in the leadup to bigger fights down the line. Marku remains a free agent in promotional terms, leaving the pool of potential future opponents both in the UK and abroad a wide one, with potential suitors including the likes of Chris Kongo, Luther Clay and Michael McKinson.

While Tokyo 2021 Olympian Caroline Dubois has been forced to pull out of Saturday night’s card due to illness, thus delaying her much anticipated professional debut, another former Olympian has taken her place. London 2012 star and two-time world title challenger Natasha Jonas is back on a Sky card as she also looks towards another crack at world honours in 2022. Jonas has expressed her desires for a rematch with pound-for-pound star Katie Taylor following their initial fight back in May whereby Taylor edged it on the scorecards. Vaida Masiokaite therefore, like Luisetto, should be a simple runout for Jonas before she hopefully moves on to bigger things next year.

The highly rated Azim brothers will also be on show this weekend, with Hassan Azim making his debut at super-lightweight respectively following him winning bronze at the 2018 Youth Olympic Games. In the opposite corner stands Ivan Njegac of Croatia (12-21-0), who despite his 21 defeats has only been stopped on seven occasions, and so should provide an adequate test for Hassan for his first professional rodeo. His brother Adam Azim (1-0-0) runs out for the second bout of his professional career at 135lbs against Stu Greener (3-7-0), hoping to take another step forward towards fulfilling the high potential many believe him to possess.

Mikael Lawal also runs out at cruiserweight against Leonardo Damian Bruzzese in his fifteenth professional bout. Lawal previously won the Ultimate BOXXER Cruiserweight tournament back in 2019 and will look to edge one step closer to a domestic title shot in 2022 with victory at Wembley Arena on Saturday.