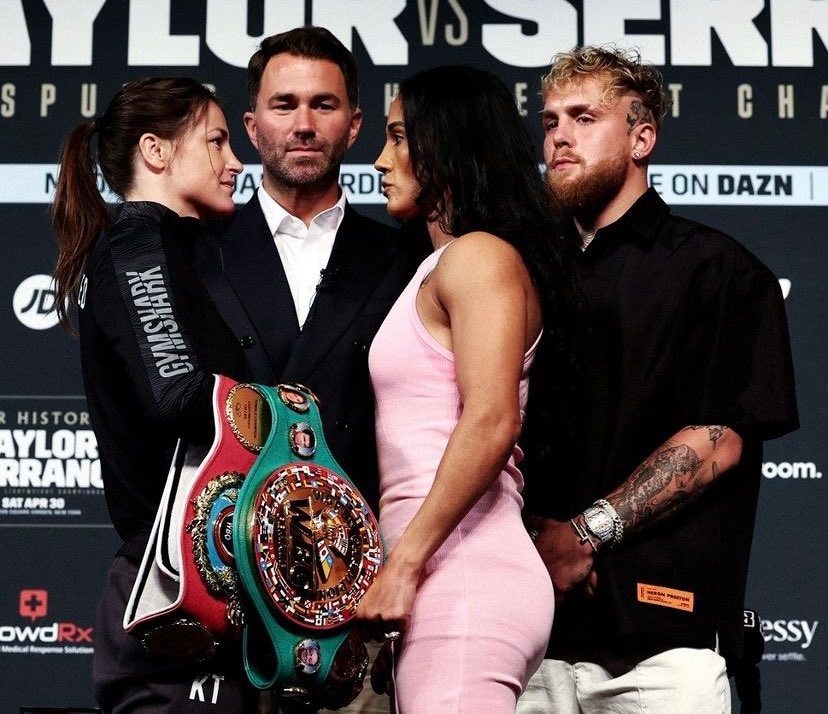 Around the globe: two huge cards in America as Taylor faces Serrano, Valdez and Stevenson unify

Two mega cards take place this weekend across the Atlantic as pound-for-pound stars Katie Taylor and Amanda Serrano come head-to-head for the undisputed lightweight championship of the world at the Meccah of boxing in Madison Square Garden. Moving to the West Coast, WBC super-featherweight champion Oscar Valdez takes on WBO king Shakur Stevenson in Las Vegas as the pair seek to unify their respective belts and crown the number one man in the division.

In a fight that has been long in the making, one of the greatest pugilists to ever be born on Irish shores in Katie Taylor will finally come face-to-face with seven-division champion Amanda Serrano of Puerto Rico as the pair clash for the undisputed lightweight championship in New York.

Lots has been made of a potential decline in Taylor in recent fights with the thirty-five-year-old appearing to slow, though much of that could simply be down to the lower quality of opposition put in front of her. Taylor has no doubt been ‘guilty’, if such a word is applicable given the resounding success she has had since turning professional, of engaging in a shootout when not necessary, her clash versus Natasha Jonas perhaps the perfect example. Jonas began to close the gap in the middle rounds as Taylor let her hands go, but the ninth saw a complete change in approach with Taylor choosing to simply box off the back foot which no doubt took her over the line to victory. Serrano meanwhile is no stranger to a dogfight, the phenomenal hand-speed clear for all to see, with the Puerto Rican remarkably picking up world titles in seven weight divisions. Both fighters have more than proven their toughness, engaging in multiple wars and back-and-forth fights where plenty of leather has been thrown. One need only look at Taylor’s two fights with Delfine Persoon to confirm this notion.

Taylor is undefeated so far in her twenty professional outings, scoring six knockouts in the process, while Serrano’s record stands at 42-1-1, her only defeat coming to Frida Wallberg in 2012 respectively. Victory for either woman will surely crown as the number one pound-for-pound fighter in the female code today which will be no mean feat given the quality of fighter currently operating in women’s boxing.

The undercard at MSG features Liverpool’s Liam Smith in a super-welterweight clash Jessie Vargas of Las Vegas as both men seek to re-enter the frame for world honours at 154lbs. The pair have been linked to face-off for several years now but for one reason or another the fight never came into fruition. The two will finally come together on Saturday however, the loser not left with many places to go given how far both are into their pro career. Two undefeated middleweights also come head-to-head, with Austin ‘Ammo’ Williams (10-0-0) facing Chordale Booker (17-0-0) in a ten-round contest, while Franchon Crewz Dezurn (7-1-0) and Elin Cederroos (8-0-0) look to crown an undisputed champion at 168lbs. Dezurn enters the night with the WBC and WBO straps respectively, while Cederroos brings the WBA and IBF titles to the table.

Top Rank Promotions puts forward a mega super-featherweight unification between Oscar Valdez (30-0-0) and Shakur Stevenson (17-0-0) in a bout which will no doubt crown the number one man at 130lbs.

Both men enter the ring on Saturday night boasting undefeated records, with each eager to hand the other their first professional defeat as the road to supremacy at super-featherweight rolls on. Last time out, Valdez edged past Robson Conceicao at the end of a fight week which was shrouded in controversy following the thirty-one-year-old popping for phentermine. The WBC still allowed the fight to take place however, and an understandable wrath of criticism was sent Valdez’s way. Stevenson meanwhile put in a career best performance so far when he stopped the then WBO champ Jamel Herring inside ten rounds, an impressive feat for the twenty-four-year-old who has already claimed titles in two weight divisions.

The undercard also features Tokyo 2020 lightweight silver medallist Keyshawn Davis (3-0-0) who is no doubt one of the hottest international prospects in the sport today as he continues his development in the pro ranks following a glittering amateur career. Troy Isley (4-0-0), another Tokyo 2020 Olympian, will also run out in Vegas this weekend. Grandson of ‘The Greatest’ Muhammed Ali, Nico Ali Walsh (4-0-0) also runs out again at middleweight.