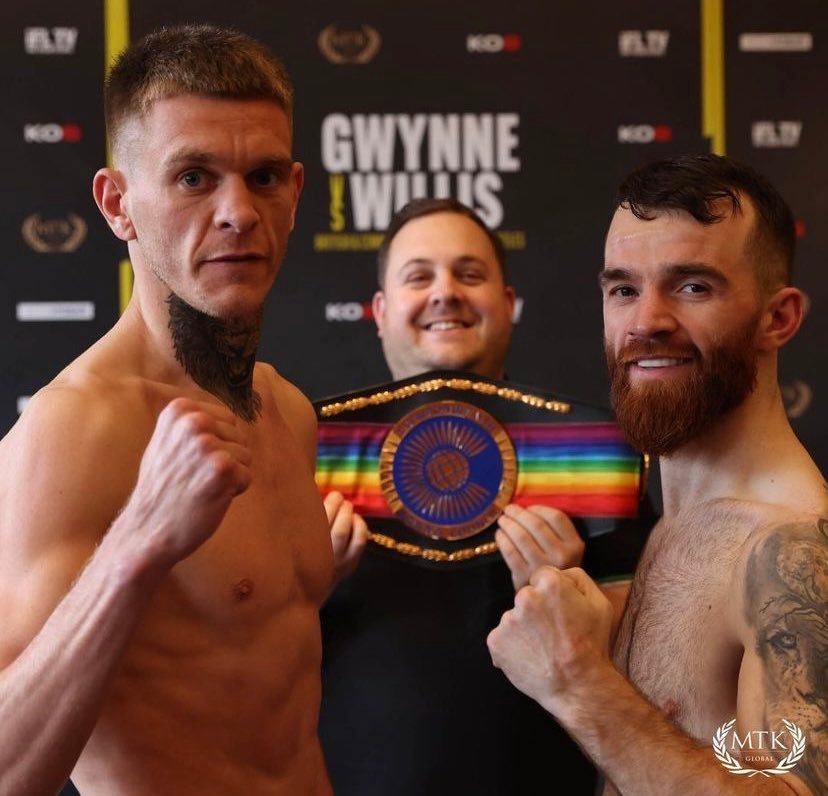 Bethnal Green’s York Hall hosts a cracking domestic card put on by MTK Global on Friday, topped by Commonwealth lightweight champion Gavin Gwynne’s (14-2-0) clash with Liverpool’s Luke Willis (11-0-0) in the main event. The vacant British title at 135lbs is also on the line as well as Gwynne’s commonwealth strap as both men seek to cement their dominance at domestic level.

Both Gwynne and Willis head into the event on Friday with solid momentum behind them, Wales’ Gwynne coming off the back of solid victories against Sean McComb, whereby he picked up the Commonwealth title, and then Jack O’Keeffe in his last two fights. Willis meanwhile has picked up good wins of his own, beating Rylan Charlton by majority decision last time out on a big DAZN card in his home city to boost his credentials at domestic level, the scouser hoping to pick up his first belts as a professional on Friday night.

Further down the card, undefeated super-featherweight Sultan Zaurbek (12-0-0) returns to the ring over ten rounds against Nicolas Nahuel Botelli (11-6-0) of Argentina, the former hoping to tick off another win as a professional as his development continues at 130lbs. Up at super-welterweight, Sam Gilley (13-1-0) clashes with Drew Brown (12-0-0) for the English title at 154lbs, Gilley picking up the strap last time out against Evaldas Korsakas with a fourth-round stoppage and will be seeking his first successful defence at York Hall on Friday. Dublin’s Pierce O’Leary (8-0-0) also returns at super-lightweight in an eight-round contest with Nathan Augustine (4-3-1), O’Leary hoping to score the fifth stoppage of his professional career as he continues his assent at 140lbs.

Nina Hughes (1-0-0) will walk for the second time as a professional in Bethnal Green, this time facing off against the experienced and tough Bec Connolly (3-12-0) at super-bantamweight, Hughes no doubt hoping to build on the first pro contest of her career back in December whereby she won all six rounds on the scorecards. Connolly only fought on the 26th March against another newly turned professional in Skye Nicolson who sparred with Hughes during the camp for this fight, and while she has already lost twelve contests, only three opponents have stopped her, providing a steady barometer for the ability of Hughes so early on in her professional career.

Carl Fail (5-0-0) makes his sixth professional appearance, this time against France’s Victor Garcia (9-11-4) across six rounds. Fail has scored two stoppages so far as a pro, and has dominated the remaining three bouts that have gone the distance, the twenty-five-year-old hoping for a similar performance this week against a man who has only been stopped twice in eleven defeats. Also walking in his sixth pro outing, Elliot Whale (5-0-0) returns at 154lbs as he too continues his professional development, Fernando Valencia (9-32-0) the opponent across six rounds.

Two middleweights are scheduled to appear on Friday night’s card, first Dean Richardson (12-0-0) clashing with Angel Emilov (10-40-0) across a six-round contest. Paul Ryan (3-0-0) also returns at 160lbs for the fourth time in his career, Gabor Gorbics (26-25-2) in the opposing corner. The card also features a debutant in the super-lightweight division with Jimmy Croxson taking on Fonz Alexander (7-124-1) of Newark over four rounds.

The event will be shown live on iFL TV’s Youtube channel.