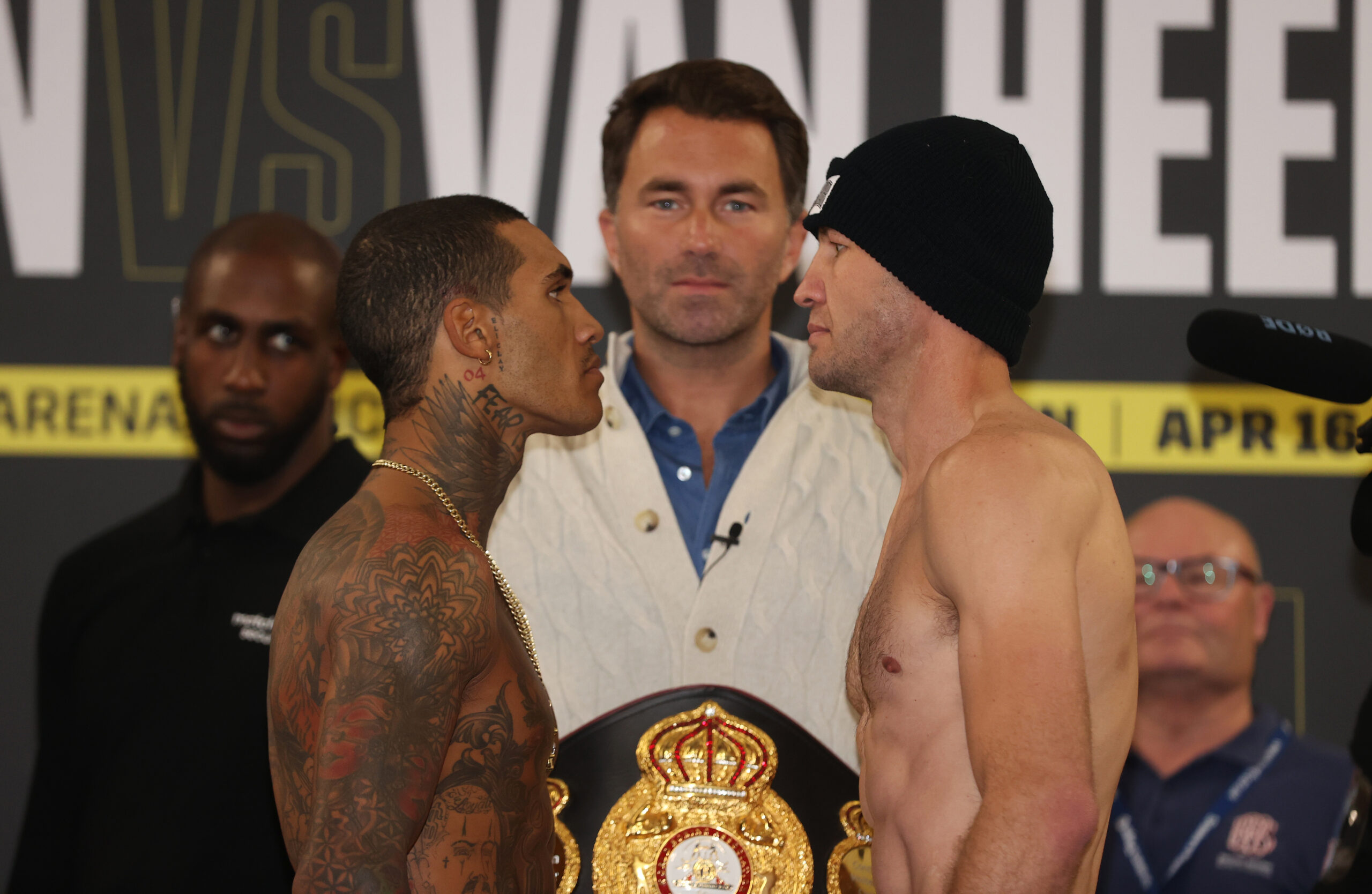 Essex welterweight Conor Benn (20-0-0) faces Johannesburg’s Chris van Heerden (28-2-1) this Saturday at Manchester’s AO Arena as he seeks to continue his assent towards world level in the 147lb division this Saturday. Live on DAZN, Benn has been promised ‘mega fights’ this summer by promoter Eddie Hearn on the DAZN Boxing Show, providing he can find a way past the thirty-four-year-old this weekend. The recent form of Benn has been superb, dismantling the likes of Samuel Vargas, Adrien Granados and Chris Algieri in his last three fights, marking his name as one of the most improved fighters across the entire sport in the last eighteen months.

However, despite criticism for the choice of opponent for Benn, Van Heerden will no doubt be seeking to tear up any script which has been written for the Brit heading into fight night, holding an impressive win over Matthew Hatton, albeit in 2013, as well as going eight rounds with pound-for-pound star Errol Spence Jr seven years ago. Most recently, the Santa Monica-based man stepped into a ring with rising star Jaron ‘Boots’ Ennis, though the bout ended prematurely as a result of a cut suffered to van Heerden in the opening round, leading to the bout being called a no-decision. Van Heerden will also be the first southpaw opponent faced by Benn so far in his professional career, providing another intriguing aspect as we head into the event this weekend, many waiting to see how far into his development Benn is as he looks to solve the puzzle placed in front of him.

The likes of Mikey and Danny Garcia have been teased as potential future opponents for the in-form Benn down the line, as well as the outspoken Adrien Broner, a fight for which the build-up would surely be edge of the seat stuff on its own. Benn must however first move past the experienced van Heerden on Saturday if he is to attain the big nights he has been longing for, a lesson he came very close to learning the hard way very early on against Cedrick Peynaud, a fight Benn has since admitted he took his eye off the ball for. Now operating at fringe world level, the Ilford man ill-afford any complacency as the opportunities look to be opening up for him.

The chief support of the evening comes in the form of a hotly anticipated rematch in the cruiserweight division. Rewind back to July last year, Bournemouth’s Chris Billam-Smith (14-1-0) was adjudged a close split-decision winner over Belfast’s Tommy McCarthy (18-3-0) with the vacant British, Commonwealth and European cruiserweight titles on the line. The decision was questioned by some online, many feeling McCarthy had done enough to edge it, the wide 116-112 scorecard in favour of ‘CBS’ causing a particular stir in what looked to be a very competitive twelve rounds. Billam-Smith has since out-pointed Dylan Bregeon over twelve rounds to defend his European title, while McCarthy has not fought at all since, both men hoping to walk out of the AO Arena on Saturday with the European and Commonwealth straps wrapped around their waists after what will no doubt be another ferocious twelve rounds of boxing.

Further down the card, newly-crowned WBC super-featherweight champion Alycia Baumgardner (11-1-0) looks to make the first defence of her world title in Manchester since she tore the belt from Terri Harper in November with an astonishing right-hand which left the latter out on her feet in Sheffield. Since then, Baumgardner has had numerous exchanges online with fellow American Terri Harper, who holds the WBO and IBF belts at 130lbs, as the two appear to be on a collision course towards a mega unification in the second half of the year. The twenty-seven-year-old Baumgardner must however first move past Argentina’s late addition opponent Edith Soledad Matthysse (17-11-1), an opponent who might not have the strongest record but will no doubt be hungry to taste success and force an exchange in the belt again.

Lots of local talent are also scheduled to appear in Manchester on Saturday night, including cruiserweight prospect Jordan Thompson (12-0-0) who impressed Eddie Hearn under the lights on the Cameron-McGee undercard back in October with a first-round stoppage, going on to put in a similarly dominant performance with another first-round stoppage in Manchester around four months ago. Argentine Mariano Angel Gudino (14-5-0) is the opponent this time around. Campbell Hatton (6-0-0) also returns to his home city for the first time since his second pro outing, looking to build on his sixth-round stoppage of Joe Ducker in February in front of his home fans as his 135lb development continues. Lee Glover (11-9-0) will be in the opposing corner on Saturday night. Little Lever’s Jack Cullen (20-3-1) is also set to return for the first time since his stoppage defeat at the hands of Kevin Lele Sadjo for the European in December, running out against Vladimir Belujsky (12-3-1) over six rounds at 168lbs. Liverpool super-welterweight James Metcalf (21-2-0) will also warm-up for his upcoming clash with Kerman Lejarraga on 20th May for the European super-welterweight title against Evgenii Vazem (9-26-0) in a six-round contest.

Salford’s Luke Evans (11-0-0) returns at super-lightweight in a six-round bout versus Argentina’s Miguel Cesario Antin (19-10-0) as he looks to maintain his undefeated record, while Cyrus Pattinson (3-0-0) runs out again early on in his welterweight career since turning professional, facing off with Alexey Tukhtarov (5-28-6) over eight rounds. Another scouser is also slated to fight in the shape of light-heavyweight Thomas Whittaker-Hart (6-0-0), who returned in February with an impressive first-round blowout after a difficult two years for personal reasons. Ben Ridings (5-1-0) is scheduled to be the opponent in an eight-round contest.

Eddie Hearn’s Matchroom Boxing promote and streaming platform DAZN televise, with coverage of ‘Before the Bell’ slated to start at 17:45 UK time, with the main broadcast set to begin at 19:00.