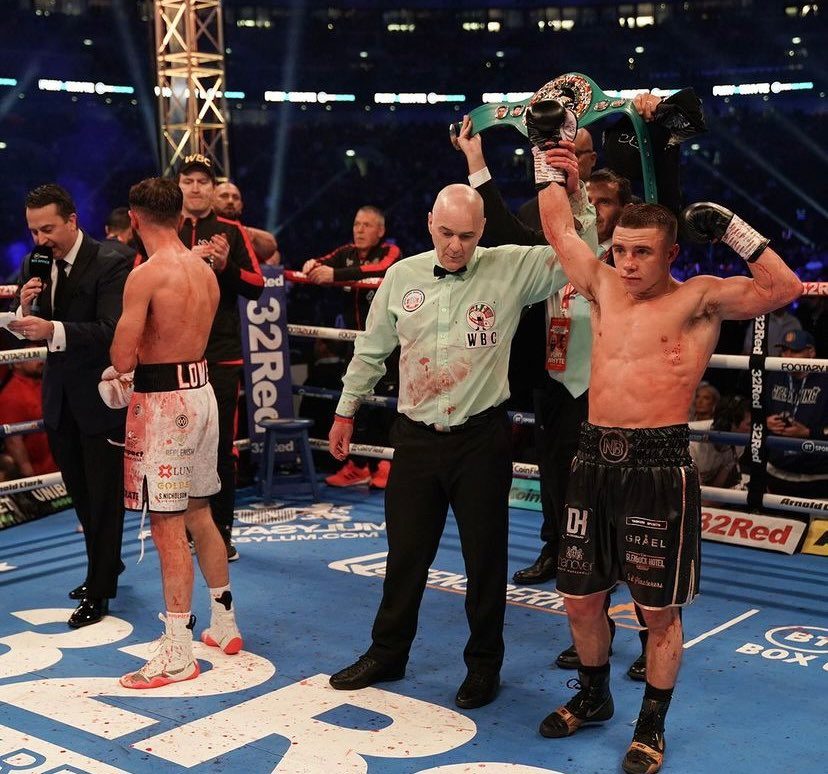 While Tyson Fury no doubt stole the show in the main event with his stunning sixth-round knockout of Dillian Whyte, Liverpool’s Nick Ball was the shining light on Saturday’s undercard in the capital as he demolished Isaac Lowe inside six.

Lowe, training partner of Fury, showed phenomenal heart and courage to stay in the fight after taking a shellacking from the Liverpudlian who initially started the bout with tidy body work in the opening round. The second then saw Lowe rocked with big left uppercuts and rights over the top before another huge left knocked the Morecambe man down heavily. The twenty-eight-year-old somehow regained his footing to survive the remainder of the round, but things only got worse for Isaac who was left with a deep gash over his left eye after an accidental clash of heads. The speed of Ball was problematic all night as he consistently rocked his opponent, seemingly unable to miss with the right hand. Blood was gushing down the left-hand side of Lowe’s face by the fourth, the Morecambe man undeterred as he continued to move forward looking to land blows of his own but it was Ball who always seemed to be having the final say. The fifth saw more superb accuracy from the Liverpool man, the cut again proving problematic for Lowe, no doubt hampering his ability to see any forthcoming punches. The next round saw the conclusion of the contest, Ball rocking Lowe in the corner with the Morecambe man then opting to turn his back to protect from the oncoming onslaught. Referee Victor Loughlin hesitated, initially appearing to step in before holding his ground, allowing Ball more time to land another devastating left which rocked the head back of Lowe before the Scottish official finally intervened to signal the end of the contest. While the refereeing was questionable, the performance of Ball certainly was not as he moved to 15-0-0 as a professional and delivered the performance of his career on the biggest stages of all.

The chief support saw Ekow Essuman defend his British and Commonwealth welterweight titles against Darren Tetley across twelve rounds in a contest which is not likely to live long in the memory. Tetley started the bout well behind a southpaw jab, arguably nicking a couple of rounds at the beginning. The champion grew into the bout the more the rounds drew on however, increasing his output and energy to eventually win a commanding decision on the cards by scores of 117-111 and 116-112 twice respectively.

Further down the card, heavyweight prospect David Adeleye moved to 9-0-0 as he disposed of Chris Healey inside four rounds. The former stunned his man with an initial left hook before a pummelling straight right rocked Healey’s chin, forcing referee Chas Coakley to wave the bout off. Brother of Tyson, Tommy Fury secured his eighth professional win in as many fights with a comfortable six-round points decision over Poland’s Daniel Bocianksi. Fury looked sharp from the off with the jab and, but for the innate toughness of the Pole, might have earned his fifth stoppage as he rocked Bocianksi on numerous occasions with the right-hand. Light-heavyweight Karol Itauma stopped Michal Ciach inside two rounds, with Royston Barney-Smith comfortably outpointing Constantin Radoi in his second pro contest at super-featherweight. Kurt Walker cruised to a comfortable four-round decision against Stefan Nicolae, also at 130lbs.