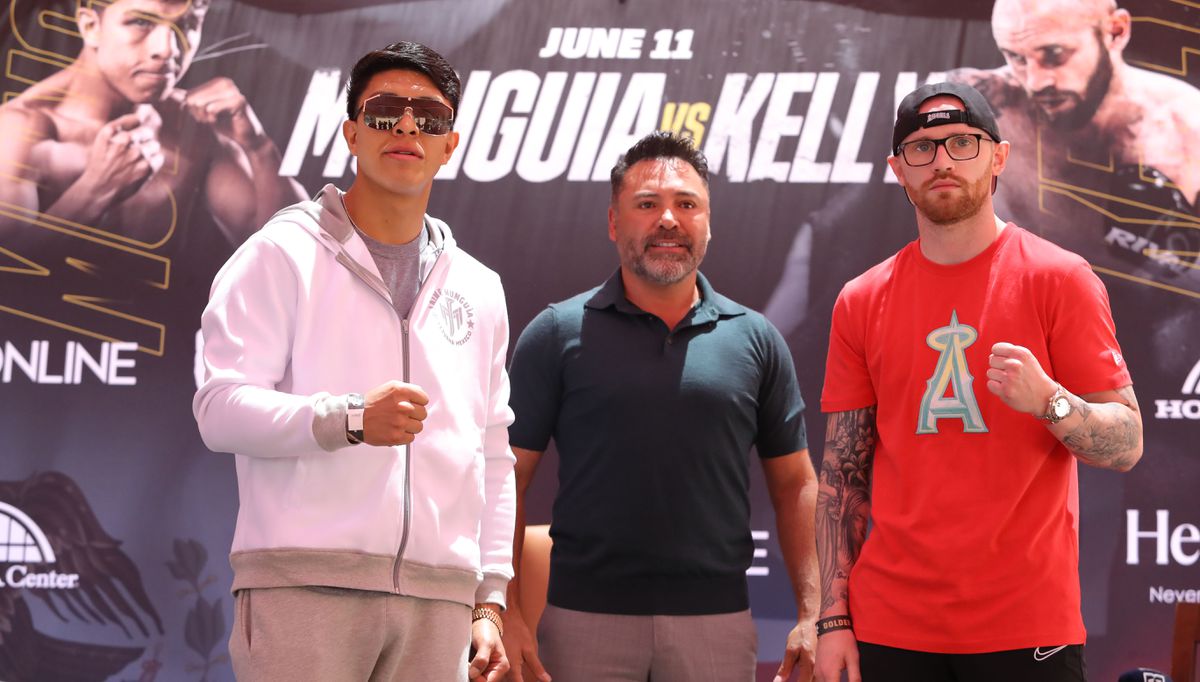 BBTV had the courtesy of speaking to Jimmy ‘Kilrain’ Kelly this week following his fifth-round stoppage defeat to Jaime Munguia in California last Sunday.

Kelly boxed superbly in the first four rounds, despite the non-sensical scoring of the judges ringside, before he was caught flush by former world champion Munguia in the fifth. A total of three knockdowns in the round sealed the fate of the twenty-nine-year-old Brit, who should still emerge from the bout with immense credit and pride from his performance.

The bout took place at a catchweight of 165lbs, five pounds over Kelly’s natural weight of middleweight, and the Wythenshawe man noted the incredible size of the Mexican on fight night. “I knew he’d put weight on but not that much. The Californian Commission weigh you in at 9am the morning before so he had nearly two days to weigh-in and put on over thirty-pound. He looked like a different person in the ring, I put on a decent amount of weight but nothing close to that. He was a cruiserweight really, it is what it is“.

The hostility of the pro-Mexican crowd was clear for all those watching live on the DAZN broadcast in the early hours of Sunday morning, but Kelly didn’t fail to notice the change in tone of those ringside following the five rounds that transpired on the West Coast. “It was loud. They were booing me but when I left the ring everyone was cheering us and wanted to shake my hand and stuff like that“. It appears that the fans could see what the three judges ringside could not, with two having Munguia up by two rounds while the third had it even heading into the fifth. “That’s the cards over there, he’s the cash-cow. I thought I won all four rounds. Strength-wise I didn’t feel out of my depth but I could feel his punching power, he looked massive in-front of me. He threw a jab [early on] and I parried but I was like ‘I’ve never felt power like that’. I’ve sparred big guys but I’ve never felt power like it, I think that ultimately made me sharper, I knew I had to be smart and use my distance. I felt my defence was sound and that I was making him miss“.

When pushed on the topic of the punching power, Kelly admitted that he struggles to find the words to describe exactly what he felt inside the ring. “I can’t explain it. The last guy I fought in Kanat Islam was a big puncher, he had twenty-four knockouts in twenty-eight wins and was unbeaten. Munguia was like a different level, it was strange but daft bollocks got dropped for the first time and then ran at him straightaway. I think in my mind I thought he was a bully and so if I go on the back-foot to survive then he would swarm me“.

“Ultimately, I said after the fight [after being told of how he had performed in the first four rounds] that there’s no point in winning the first one-hundred metres of the marathon, you have to see it to the end. But it was a good experience“.

There can however be no doubting that many key figures across the sport stood up and took note of the performance Kelly delivered on Sunday and that big opportunities could now begin to open themselves up to him. “De La Hoya came straight into the changing rooms after the fight and said ‘what a f***ing beast you are, I’ve never seen anyone get knocked down and get up and run at the opponent’. It probably wasn’t the brightest thing to do, but he told me that I’d win a world title at 160. That’s good, and my promoters have had a chat about a world title at middleweight. I feel like I put myself in the shop window by taking the fights and so the rewards are coming I guess“.

Remaining active will be key if Kelly is to soar the heights that the first four rounds suggested he might be capable of, and he displays a refreshingly positive outlook and determination as he pursues his boxing dreams. “I’m enjoying the rest at the minute because I’ve had three fights in the last six months, two of which were ten and twelve rounders. The Munguia fight only came at four weeks notice, I was scheduled to fight the 9th July in Florida so I was already in training but then the opportunity came for this. [This is why] I tell young guys to stay ready in the gym, the call came and it was done within a few days. They were offering the fight to people who wanted twelve weeks [to prepare]. It’s a big opportunity, and if you win the fight then the world opens up to you“.

“Most likely they [next fights] will be Stateside for the foreseeable. I feel like boxing is setup well over there and we’ve been getting good opportunities. Golden Boy are a well-oiled machine, they’ve done well. It was really professional. When we were having an argument over the type of gloves, Erik Morales [Hall of Fame and Munguia’s coach] was like ‘just let him wear what he wants’. That was nice to see, we’ve got no complaints. I would have liked the weigh-in to be a bit later but it is what it is“.

Kelly did admit some frustration in the immediate aftermath of the contest, feelings he made known to referee Thomas Taylor. “The referee came in and said ‘what a heart you’ve got there’. I was arguing with him for like a few minutes after, I was like ‘I had three seconds of the round left, let me go back to the corner’. I looked at Munguia [when I got put down] and he was panting like mad and I thought ‘mate, he’s f***ed’. Even though I had been put down, I didn’t feel like my legs were gone so let me get back to the corner have a minute and let me get back to my boxing. I knew the earlier rounds were when he was most dangerous so I thought I could take him late. That could have been him blowing his beans [when he was panting in the fifth], but I’ve got no excuses and no regrets, we’ll go again“.

“I’m buzzing. I still feel like there’s a world title left, I live good and I’m still in my twenties. I could fight for another five years, I’m excited. I’m not too disheartened, with the Kanat fight I didn’t enjoy it as much because I wanted to push on, so I’m not gonna let a loss dishearten me too much. It is what it is. The guy was bigger, it was short notice and he’s a f***ing monster“.

Kelly made clear his appreciation for the support he’s received both before and after the fight as he looks to dust himself down and go again in pursuit of the big names in and around middleweight. “Thanks to everyone who tuned in and people who supported us. COVID was a bit shit because I didn’t fight but I feel like I’ve got a bit of momentum now and I’m gonna chill out with the family for a bit and switch off from boxing but I’ll be back. Even though I’ve lost I feel confident because I fought a f***ing monster. I remember seeing him fight against Liam Smith and Dennis Hogan and thinking he looked dead skinny, but now he looks like a monster because he wasn’t weight-drained. I gave a good account of myself, I thought I won every round”.