Haye’s Pen as mighty as his Haymaker 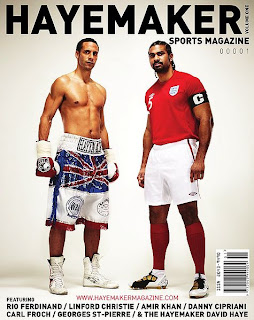 Renowned for his exploits in the boxing ring, Britain’s world heavyweight champion David ‘The Hayemaker’ Haye has recently discovered that the pen is every bit as mighty as the sword – or glove.
The current WBA heavyweight king has put his name and distinctive touch to HAYEMAKER MAGAZINE, a commemorative, 192-page, glossy sports magazine, to be released on Saturday, April 3rd.
Fight fans can get their hands on the exclusive magazine at the Manchester Evening News (M.E.N) Arena, moments before Haye steps into the ring to defend his belt against mandatory challenger John Ruiz. “Hayemaker Magazine has been a project I’ve been working on for the last five or six weeks now,” explains Haye, editor and creator.
“Originally, I just wanted to produce a beefed-up fight programme that I could present to fans as a homecoming gift in Manchester. I wanted to give them lots of exclusive pictures and accounts, and loads of never-before-seen access.
“That eventually snowballed into a 192-page sports magazine and a definitive look back at my career to date. I couldn’t be happier with the finished product.”
Not content with just focusing on his own life and career, Haye also found the desire to reach out and include fellow sportsmen and women in his pet project.
“I wanted the magazine to focus on my career to begin with, but then also liked the idea of focusing on other sports stars,” explains Haye. “I know what makes me tick and why my career has been a success. I’ve always wanted to know how my sporting peers got to the top, though. I basically got in touch with all the guys I wanted to talk to and find out more about.”
In the space of a month, Haye had met up with and interviewed England football captain Rio Ferdinand, former Olympic sprint champion Linford Christie and England rugby ace Danny Cipriani, as well as fellow world champion boxers Amir Khan and Carl Froch.
“I don’t pretend to be some kind of expert or have any history of interviewing people,” adds Haye. “I’m usually the one being interviewed, after all.
“Despite that, I really enjoyed the process and loved talking to these guys. We would sit and chat for over an hour and I seemed to be able to get these stars to open up and talk about stuff they normally keep to themselves. They didn’t feel threatened by me and we could just talk as one sportsman to another.”
Haye’s interviews and photoshoots with Ferdinand, Christie, Cipriani, Khan and Froch all feature in volume one of Hayemaker Magazine, alongside additional interviews with UFC star Georges St-Pierre and leading boxing prospect George Groves.
Hayemaker Magazine also features an exclusive account of Haye’s harrowing trip to Senegal, West Africa, as well as a definitive, behind-the-scenes look at his last four professional bouts.
“I always need some kind of project to work on before a fight,” says Haye. “Anybody that knows me will tell you that I’m always looking for direction and something to take my mind off the fight ahead.
“If you stay wrapped up in the fight too much, you’ll only drive yourself crazy. I needed something like this to keep my mind working in a productive way during training camp.
“Thankfully, it’s all finished now and I hope my fans enjoy the final product as much as I do. It was really fun interviewing, writing and spreading all the features out.
“Now my full attention is on spreading John Ruiz out across the ring canvas on April 3rd.”
*** Hayemaker Magazine (limited edition) is officially released on Saturday, April 3rd and can be purchased at the M.E.N Arena or online at www.hayemakermagazine.com.
Further details can also be found at www.hayemakermagazine.com.
*** David Haye’s WBA world heavyweight title defence against John Ruiz takes place on Saturday, April 3rd in Manchester and will be screened live and exclusively on Sky Box Office.