Winky Wright as pulled out of his fight against Matthew Macklin, which was scheduled for April 9 at the MGM Grand in Las Vegas.
Wright (left) the former undisputed junior middleweight champion was returning to the ring after a two-year layoff but sights an hand injury for the withdrawal from the bout.
Golden Boy promotions will now be looking for a suitable replacement to face Macklin, the current European middleweight champion in what was to be his defining fight. 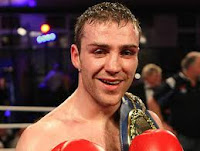 Wright was scheduled to face Matthew Macklin (right) on on the HBO PPV card headlined by the Erik Morales-Marcos Maidana junior welterweight fight.
Macklin (28-2, 19 KOs), 28, is unbeaten in an 11-fight winning streak and hoped to make a name for himself in America with a victory over a modern ring master, that would have propelled his profile and almost guaranteed a world title shot.
Macklin won the vacant European belt by stopping Shalva Jomardashvili in the sixth round in September and defended it in December.
by Chris Maylett