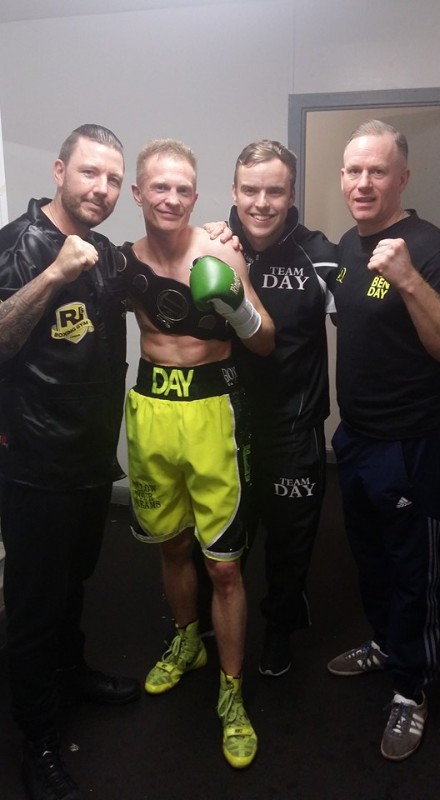 The 37-year-old Devonian absolutely sizzled in what was a highly impressive 129 seconds of boxing action.

From the opening bell, Day radiated confidence, adopting his traditional elusive style with hands held low, avoiding Taylor’s punches with ease whilst scoring stinging shots of his own.

Day dropped Taylor with a well-placed left hook flush to the chin and although he bravely continued, the facial expressions clearly displayed the effects it had and it was all over shortly afterwards.

10 years his junior, Taylor failed to land a single punch on the older opponent and absorbed one too many body shots when caught on the ropes causing the referee to step in and call off the contest.

Post-fight, an ecstatic victor stated, “I can’t believe it, it’s crazy! I could see his shots coming before he even threw them, the shot I caught him with I had been working on in the gym.”

Trained by brothers Frank and Johnny Greaves out of the famous Peacock Gym in Canning Town, this was Taylor’s third crack at the Southern Area crown and now third consecutive loss.

Day has now twice won titles with first round finishes, the first being the International Masters Bronze lightweight strap with a first round KO of Latvian opponent, Ilja Sovdra in March this year with just 1:11 on the clock, also at the York Hall.