English lightweight champion Derry Mathews is back on the British Boxing scene! – It is the second coming of the former WBU featherweight champion, since his retirement from the game, Mathews is ready to get back to the top with a new found vigour for boxing.
After a testing period in his life and back to back defeats, that saw him walk away from the sport he loved in 2009 – Derry is now enjoying new found success in this new chapter of life and boxing career.
The Liverpool boxer has changed training camps, joining Oliver Harrison’s successful Salford Gym and with it getting back his buzz for the game and a new lease of life, as he looks to punch his way back up the British and world rankings.

Ive come back with a new lease of life, I’ve got a great team, great family behind me and it’s onwards and upwards.” – Derry Mathews.

As an amateur Mathews won the 2002 ABA Bantamweight championship. He shot to prominence in October 2006 when he won the English featherweight belt and then went on to defeat Stephen Foster to win the WBU Featherweight title. He then lost the title to Choi Tseveenpurev in 2008 and after another three defeats on the bounce retired from boxing.
But now back and under Harrison’s wing, Derry has fought eight times, losing only once, in the Prizefighter final against Gary Buckland. During the tournament, he managed to gain revenge over Choi. He has also avenged the defeat to Scott Lawton recently, in the process winning the IBO International title. In his last two fights, he has scored first round knockouts over Amir Unsworth to claim the English lightweight belt and then George Watson, proving he is back with power!
Mathews 27, was left disappointed recently after a fight for the European title against Gavin Rees was cancelled, when the Welsh champion withdrew from the fight after sustaining a hand injury in training. 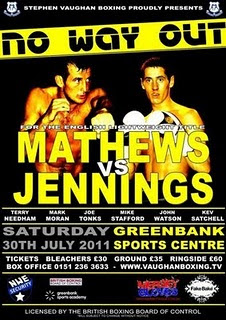 Putting that disappointment behind him ‘Dirty Derry’ will now defend his English title in a Merseyside derby against Kirby’s Stephen ‘Jenko’ Jennings at The Greenbank Sports Centre in Liverpool, July 30, on a show promoted by Stephen Vaughan www.vaughanboxing.tv – With a fight against Rees to be re-arranged, if he takes care of Jennings.

Derry admits to being friends with Jennings 27, who is undefeated in six fights. But will put friendships aside when they clash at the end of the month. Matthews and Jennings have met three times as amateurs, with Mathews wining all of them.
BritishBoxers visited Derry recently at his training camp in Manchester, to ask him about the up-coming title defence against Jennings and his comeback after his brief retirement.

Derry also speaks about his inclusion in Prizefighter, his new found love for the game, the influence new coach Oliver Harrison has had on the second part of his career and the hard decision to leave life long coach George Vaughan at the ‘Solly’ boxing club in Liverpool.

When he is not boxing Derry also uses his time and experience to help local kids get off the streets and into the gym. He heads the Boxing & Fitness Academy and is responsible for its development across the region. He promotes the Gun, Gang & knife project for 11 – 19 years olds across 6 districts of Merseyside and over seas the development of five of qualified ABA Coaching staff. It is a role Matthews is proud to do and a cause close to his heart.. For more information on Derry’s work go to www.streetcagesportscic.com.
Derry Mathews vs Stephen Jennings fight weigh-in Video
JaneCouchBoxing

Watch the full interview with Derry Mathews – Video above.

For tickets to Derry Mathews vs Stephen Jennings visit  www.vaughanboxing.tv