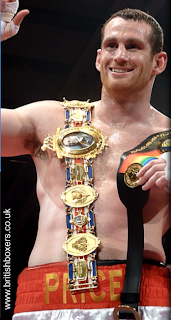 A new Liverpudlian sporting Hero truly emerged on Saturday night (May 19) when David Price became the City’s first ever British heavyweight champion, knocking-out Sam Sexton in the fourth round adding the Commonwealth strap also to his new Lonsdale belt, that were both vacant and up for grabs.
The crowds turned out at the Equestrian Centre, part of the Aintree race course in Liverpool, in their droves they packed the arena and big Pricey didn’t disappoint them. Coming to the ring to the deafening sound of his football team Liverpool FC’s  adopted song; ‘You’ll never Walk Alone’ Price looked edgy and in the zone as he made his way to the ring.
The 28-year-old, 6ft 8ins Price, a former Beijing Games Olympic bronze medallist had his rival from Norwich down three times during the fight and after feeling the force and power of Price’s shots from early on, Sexton knew he was up against it.

A right cross, right uppercut were detonated by Price, at two minutes and seven seconds of the fourth round, that had Sexton on the canvas and out, forcing referee Howard Foster to wave the contest off before completing the count.
Price started the fight well, taking the centre of the ring using his jab to control the tempo and mixed his work well to head a body taking the first two rounds. Sexton was game enough and tried to bob and weave himself into the fight he landed the odd glancing shots, but nothing of note and after the second round, it started to look like an uphill battle for him.
Price upped the ante flooring Sexton in the third with a cupping right hook, that caught him on the temple and forced him to take a knee. It was the break through Price had forced and now it looked only a matter of time before he would finish the fight. Sexton beat the count and applauded the shot, but the bell went before Price could land the finishing blow.
In the fourth, Price stepped straight into range and began to plant his feet and sink in the punches. A right cross landed on Sexton, which was followed up by an instant right uppercut in a quick combination of shots that sent the sweat spraying from Sexton’s head and him to his knees.
The brave Sexton got up and fought on but it was to no avail and Price put an end to the night in viscous fashion when his big chopping right hook knocked Sexton over and out.
Price becomes Liverpool’s first ever British heavyweight champion and extends his unbeaten run as a professional to 13 fights and although he says he is three or four fights away from facing one of the Klitschko brothers, Price believes and is confident that he will eventually go on to be heavyweight champion of the world.
“It’s everything I’ve worked towards since I turned professional. This was the first target, that’s done. Now we can move on.” said Price.
“I felt like I boxed the perfect fight,” I don’t think Sam Sexton laid a glove on me. I knew when I started getting through I’d hurt him.”
“I’m ready to move on and challenge the best out there. I’ve got to take my time, but making a statement like that, I’m going to have to move forward again.”
“I believe that is my destiny, I’m doing everything right. I’m just going to keep working in the gym. I’m not the finished article yet, but I will get there.” Price added.
Promoter Frank Maloney believes that Price has a jab to rival another heavyweight fighter he once represented, Lennox Lewis and believes like Lennox, Price will become heavyweight champion one day and bring the title back to Britain: “What we saw tonight was a perfect performance – 10 out of 10. That’s the best jab I’ve seen since Lennox Lewis.
“We’ve now got someone who I believe will bring the heavyweight world title back to Britain.” said Maloney.
Late into the night after Price’s win, in a Liverpool derby fight Kevin Satchell claimed the vacant Commonwealth and English flyweight titles with a stoppage win over former British champion Paul Edwards.
Satchell controlled the bout and mid-way through the 10th round, Edwards’ corner pulled their man out.
Earlier in the night;
Darren Hamilton put in a career best performance to claim the British light-welterweight title, when he outpointed Ashley Theophane over twelve rounds. full fight report here.
Other results from Liverpool:
Adil Anwar beat Dave Ryan UD points over 10 rounds
Louis Cuddy beat Jozef Kusmirek KO 1
Travis Dickinson beat Jevgenijs Andrejevs on points over 8 rounds
Dillian Whyte beat Zurab Noniashvili KO 1
John Quigley beat Scott Moises on points over 6 rounds
Sean Dodd beat Kristian Laight on points over 6 rounds