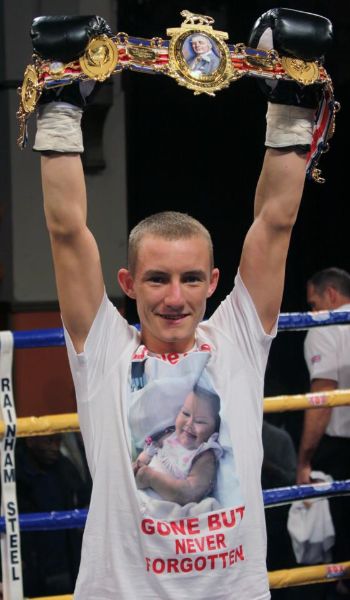 ‘Baby faced Assasin’ Paul Butler became the new British super-flyweight champion at just 1:09 of the opening round, after planting a spiteful left hook to the floating rib of his opponent John Donnelly in this all Merseyside Derby fight at Liverpool’s Olympia on Friday night.
Doing what I do, it’s only right I should be able to recognise a good prospect when I see one, and from the first time I saw Paul Butler on his debut at the Echo Arena in December 2010 on the Paul Smith verses James DeGale bill, I knew that this lad had them special ingredients to go as far as he wanted to in his chosen sport.
Hailing from Ellesmere Port, Butler’s named himself after his boxing hero Marco Antonia Barrera, and the Mexican legend would have been proud of the left hook he finished Donnolly off with himself.
Butler came into the pros on the back of an exciting and successful amateur career.

He boxed out of the famous Vauxhall Motors ABC for 11 years as an amateur, where he won an ABA title, and was crowned senior Flyweight champion in 2010, he also had 29 fights for England.

After turning professional he hooked up with former pro Anthony Farnell in Manchester where he has racked up 9 wins on the bounce with 4 Ko’s under Farnell and becomes the Mancunian trainers first British champion. It only seems like yesterday that Butler made his debut in an half empty Echo Arena two years ago, at the Olympia tonight his fans were crammed in to the rafters.

Butler, 23, becomes British champion after just 9 fights, and that’s some going, but he looks like one of them boxers who gets visibly better with every fight, and this just looks like the beginning of what could be a very interesting journey for young Butler.

Great to see Anthony Farnell getting his first Lonsdale belt for the gym, a belt the former world champion rates as ‘the best belt in the world’ and one he never got to fight for himself in a 37 fight career. Now mentoring boxers, Arnie is unrivaled in his dedication and commitment to the game and his job, and is like a father figure and trusted friend to the lads he takes under his wing, giving all his energy to the cause. Together with that he is one of the most genuine and nicest people you could meet, well done Arnie you deserve every bit of success that comes your way you’ve earned it.
Farnell and Butler look like a formidable combination so watch this space, Arnie might just have his first world champion on his hands here too!

Referee Ian John Lewis’s decision to prematurely stop Enzo Maccrenelli in the second round of his Commonwealth title challenge to Ovil McKenzie over shadowed anything else that went before it in the fight.
The official who yells at the boxers before every fight ‘I am the referee’ just in case they have landed from planet Mars given a pair of gloves and thrown in the ring, stole the show by stopping the fight too early.
The fighters safety is always paramount and referees are encouraged and promoted to take that stance. For a boxing referee Its all about timing, the rules and regulations have to be adhered to by the official and the fighter, but the refs discretion and split second decision making can change the course or end a fight. It isn’t an easy job and the pressureto get it right is immense, so credit to anyone who does it. But it isn’t as hard as being one of the fighter’s under his command and taking the shots, and who’s future is on the line in more ways than one and they have to get it right every-time.
This fight started fast and neither man had to go looking for the other. They were swapping leather from the first bell and it was turning into an interesting contest. The common guess was that this fight could end anytime with both being big punchers and historically vulnerable.

Although the champion McKenzie did land some big hooks that twisted Maccarinelli’s head round, prior to the stoppage, the challenger wasn’t in big trouble and was covering up looked aware of what he was doing and was poised to fire back.

Lewis appeared to spring forward to get closer to the action just as Maccarinelli was beginning to get tagged, but didn’t stop himself and ended up in-between the two fighters to the surprise of everyone, including the boxers and what looked liked him-self, when he realised he had made a mistake.
He looked as if he was thinking what to do for the best and appeared to ask Maccarinelli if he was ok, while he took few seconds to think. A standing 8 count couldn’t be administered and to wave the fight on after clearly stopping it, would have been unjust to McKenzie, made a mockery and set a president for future decisions of this kind. The referee‘s decision has to be final in boxing, we don’t require touchline technology here.
A rematch is the obvious outcome and resolution here, and the honest McKenzie will not have any problems giving Maccarinelli one, but Ian John Lewis should have to answer for this misjudgement and together with some ridiculous score cards in the past from the same official its about time officials in boxing were brought to account for mistakes of this career defining ilk, either that or be judged on performances and tested regularly to see if they are up to such an important job. read more about this fight…
Undercard results