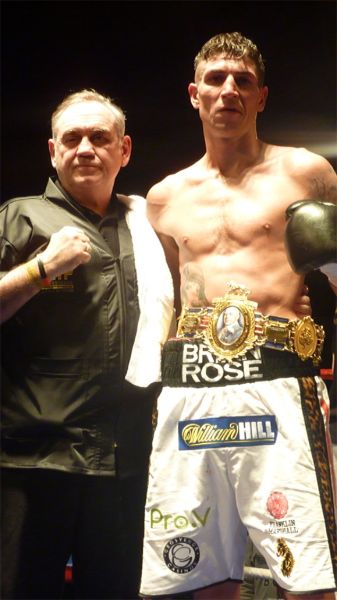 Brian ‘The Lion’ Rose will be able to show his grand-kids the Lonsdale belt in years to come, after he claimed it outright on Saturday night, in the third defence of the coveted strap, defeating former holder Sam Webb by unanimous decision at the fantastic Winter Gardens in Blackpool, home of the Lion.
Rose, 27, was always one step ahead of his opponent and dictated the fight from behind his text book jab. But he didn’t have it all his own way and Webb had his successes, the first half of the fight was very nip and tuck, and Webb had come to fight!   But Rose would soon grasp the upper hand and it got harderas the fight wore on for Webb to break through the tight guard of the champion.
Many believed before the fight that Rose would use the ring and out-box Webb on the back foot, but after feeling out his challenger in the first round he chose to stay in front of Webb, peek-a-boo up and looked to soak up his shots on the gloves and arms, firing back accurately with sharp counters that eventually built up Rose’s winning points tally.
Webb finished the last round strongly and went for broke, landing some heavy shots on Rose,some big right hand’s in-particular bounced off Rose’s head, but the champion took them well and eventually cruised home to the final bell.

Judges Howard Foster and Steve Gray scored the fight 116-112, the third official Dave Parris had it 116-113 all in favour of the champion Brian Rose.
When the decision was called an emotional Rose was in floods of tears as the pressure valve was released and It was a mixture of relief and joy. Brian Rose has had a tough road to get where he stands today and deserves his success. The Lion has shown dogged dedication, an unbreakable will to succeed and the courage to come back from the depths of despair to claim his mantle, has the King of the British Light-middleweight jungle, and the lad deserves it.

After the fight both fighters gave each other the credit they deserved after what turned out to be a very good fight, non of them had to look for the other all night, they met head on from round one and never let up to the last. But it was Rose with the edge and who will look to push on now to European and world level in the coming year.
“I’m over the moon.” Rose told BritishBoxers after the fight. “This (Lonsdale Belt) means the world to me, this is for my son Oscar, it’s not mine it’s Oscars.
“I need boxing to keep my family, without boxing I’m not earning. This belt is what I’ve dreamed of since I was nine years oldafter the fight I burst into tears, because I was so emotional, it means the world to me
“It wasn’t the best  performance, but champions grind out wins and that’s what I did tonight.” added Rose.

After the fight Sam Webb told BritishBoxers (video below) that this would be his last fight and he would be retiring from boxing after a 7 year fight career. “I’m gonna retire now, It isn’t the best way to go out but you cant just carry on and carry on, Ive got a son and a Mrs and they are much more important to me than boxing now.”

“Don’t get me wrong boxing has played a massive part in my life, but it’s the next part of my life now and it’s the next part of my life that’s more important.
“I’m gonna stay involved in it (boxing) and it’s heart breaking, but it’s one of those things.”
Webb who won the same British title back in 2010 has been a great servant to the game and we wish him all the very best for the future.
Ring Walks, Decision and Post fight Interviews with Brian Rose, Bobby Rimmer and Sam Webb.
Undercard
Manchester’s Terry Flanagan forced a 4th round stoppage over Mickey Coveney after the Londoner failed to come out for the start of the round.
English and lightweight Prizefighter champion Flanagan had worked his man over in typical fashion, with flashy, quick burst combinations and Coveney although he gave a gallant effort for three rounds, was on an hiding to nothing and it looked like Flanagan’s neatly picked body shots had taken there toll.Flanagan takes his record to 19-0 and will be looking for a British title fight in the new year.