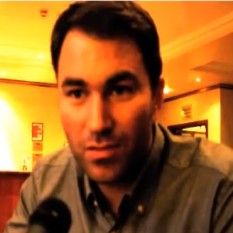 This time last year Lee Purdy was a former British champion, who was having to re-build his career after losing his Lonsdale belt to Colin Lynes at the end of 2011. Purdy returned in March 2012 to win the English welterweight title against Adnan Amar, which signaled his dramatic turn in form, which now takes him into the biggest fight of his life, and shot at big time.

Purdy will challenge IBF world welterweight champion Devon Alexander on May 18 at the Boardwalk Hall in Atlantic City, after Sheffield’s Kell Brook had to withdraw with an fractured foot.

Purdy’s promoter Eddie Hearn of Matchroom spoke to Kugan Cassius of ifilmLondon about receiving the call to offer them the fight after Purdy was this week ranked at No4 in the IBF’s ranking update and all the nuts and bolts that lead to this great opportunity.

Hearn also speaks about tonight’s big Matchroom show in Blackpool, when British light-middleweight champion Brian Rose meets big punching American Joachim Alcine in the top of the bill attraction, for the vacant WBO Inter-Continental light middleweight title. There is a packed undercard at the Winter Garden’s and Hearn rounds it up. The promoter also updates us on his latest signings.

Boxing Results from Blackpool, updated as they happen here