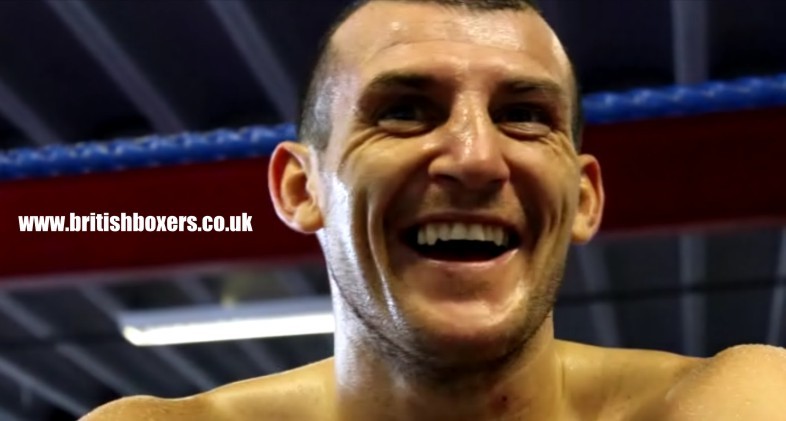 Derry Mathews is leaving no stone unturned in preparation for his rematch with Anthony Crolla on March 30 at the Echo Arena in his home City of Liverpool. He has been training harder than ever and using every possible avenue to make sure he is better than ever for this commonwealth title fight.

Mathews, 29, is currently training and sparring at the Gleeson Gym in New York for a week, after starting his 12 week camp in Scotland and then a stint in Spain. The trip to the Big Apple was set in motion by Derry’s coach Danny Vaughan and world class sparring has been arranged for him by New Yorker and current WBA welterweight champion Paulie Malignaggi and Derry is savoring every moment of the experience he believes will help bring him on and ultimately beat Crolla again.

“I’ve been locked away again for this fight making the sacrifices that need to be done.” Derry told BritishBoxers from his American training camp.

“I’m here in New York for a Week with my coach Danny Vaughan,  his son and wife who is also my main sponsor Fake Bake, they have paid for my trip and want the best for me they are a big part of my camp and I can’t thank them enough.

“I have a 12 week training camp for this fight instead of the usual 6 so I have spent a bit of time in Spain too prior to this trip, but Danny is monitoring me so I don’t over do it, his experience speaks for itself.

“Danny decided we needed to up our game, so he choose the States and I’m here at Gleasons Gym and sparring with world champions. Paulie Malignaggi sorted my sparring for me and the coaches at Gleasons have been in contact with me and Danny regularly prior to us getting over here. So everything was planned for me to be here and for the trip to bring me on. I am expecting hard spars with world class fighters, who we like to be kept close to our chest, but we are hoping to get a few sessions with Zab Judah.

“I rate Anthony as a top fighter, so I have to prepare the best.”

The battle hardened Scouser is enjoying the halcyon days of his career at the moment in his second stint at professional boxing after retiring in 2009 following a loss to Scott Lawton and an unsteady personal life at the time. But after a year out he returned to the game he loves and never looked back turning his life and career around and becoming one of the boxers that others boxers will pay to watch and a firm fans favourite.

Derry’s first meeting with Anthony Crolla in April last year was a contender for fight of the year and the track records of both suggests that a second meeting will be just as intense, sharp and spectacular as the first, which Matthews won in dramatic fashion stopping then British lightweight champion Crolla in round 6 to claim the Lonsdale belt.

Two and half months later Mathews lost the title to Gavin Rees in his first defence, while challenging for Rees’ European crown and with both belts on the line, produced a barn stormer, another for the future ‘Very Best of Derry Mathews Compilation Video’ although the result didn’t go his way that Sheffield night in July and he was stopped in the 9th after putting in another gutsy shift against the former world champion.

An unsuccessful stint in October’s Prizefighter saw Derry go out in the semi finals against Terry Flanagan. Derry was cut bad in his first fight on the night and it didn’t do him any favours with both eyes streaming blood and effecting his vision and performance, but in true to form fashion the Liverpool Gladiator battled his way through losing on points to eventual winner Flanagan.

With cuts healed Dirty Derry was back in the ring the place he knows best, finishing 2012 with a 1st round KO victory over Bulgarian Asan Yuseinov on the undercard of Crolla v Farrell in December on a Dave Coldwell promoted show. Derry has recently signed with Coldwell and one of the first things that he stipulated to his new promoter was that he; ‘Only wanted to be involved in big fights’ and Crolla was the first name on his wanted list.

“As soon as I signed with Dave Coldwell I sat down with him in his office for a few hours with my fiancee Michelle and I said; ‘Dave I want to be in big fights starting with a rematch with Crolla.’ And now it’s happening!

This is a fight that doesn’t need any selling, the show is already sold-out such was the demand to see two of the most honest and affable blokes in boxing set about each other again, putting friendship and niceties aside. But an added bonus for both is that the Commonwealth belt will be up for grabs and it is a belt that Derry is looking forward to getting around his waist.

“Last time I beat Anthony I hurt him with every shot and every shot I hit him with and again I will hurt him! – The last time the ref saved him big time and he’s come back a better fighter so he says!

I asked Derry (32-8-1, 17KOs) if the first fight with Crolla was was harder than he had expected it to be? And how he sees the return panning out tactically? “I always have a plan A, B and C. he explained.  “But I wont be moving from the centre of the ring, so if he wants to come and fight he doesn’t have to go looking for me, il be there for him.

“Yes the first fight was harder than I thought it would be because I was terrible! I didn’t get out the blocks fast enough and was getting caught with stupid shots. But this time ill be ready for a war from the first bell.

“I know I will win this fight, I am expecting the best Anthony Crolla and I don’t want him or his team making excuses at the end, I want to prove it wasn’t a fluke and the opportunity to fight him in my own City to a sell out crowed is a massive plus. I am also delighted that the fight is for the Commonwealth title. Growing up I witnessed David Burke winning it, so to match David who was my idle growing up would be fantastic.” added Derry.

Fight of the Year is always a topic that comes up when speaking to Derry Mathews these days and with this fight being billed as another potential classic, Derry is always happy to oblige the fans who always expect when they watch a Derry fight and he is happy to put his all on the line in every fight for the faithful.

“I hope this is another fight of the year of course, I love being involved in them! This sport is about pleasing the paying public, so to be involved in big fights is great for me and a nice way to pay them back, at end of day they pay are wages!”

Life for ‘Dirty’ Derry Mathews has never been cleaner and purer than it is now, in and out of the ring he is a more mature person and fighter. He is content with life and under friend and coach Danny Vaughan is enjoying life as a pugilist as he enters a period of his life that he says will see him at the peak of his powers.

“I am loving every minute of boxing at the moment and my personal life couldn’t be any better I am getting married in October.

“I enjoy waking up the morning, going the gym or running with Danny, hes like a big brother to me. Hes the boss and I listen to everything he says if I keep doing that I cant go wrong. I get butterflies when we both talk about fights an we both agree. If I didn’t get them butterflies or be shitting it before fights I wouldn’t be doing it. I am trying to get to 50 fights – I love fighting regularly.

Derry with Danny and Stephen Vaughan

“I want another shot at British title and also a return with Emiliano Marsili for the European title, I would love that rematch against Marsili with Danny in my corner. (Derry was stopped by Marsili in round 7 in January 2012 for the IBO lightweight title) There are no excuses, the better man beat me that night. Things just didn’t go right for me that night but next time they would.

“I am more mature now than ever and I’m feeling at my peak, so there are a few more years in me just yet if I keep getting the big fights I want.”

I just want to thank all my fans back home for all buying tickets, the support is world class! I have sold all the tickets I had been given and I won’t be letting them down.

“I am winning this title for them and my family.”

Derry in NewYork training for fight

“Also I’d like to say a big thank you to my sponsors; Abbey Logisics, Fake Bake, Body Fuel, Shooka Bootcamp and Edgeclusive. Without their help none of this would have been possible and I cannot thank them enough for the continued support..” You can follow Derry on Twitter here: @deryymathews23